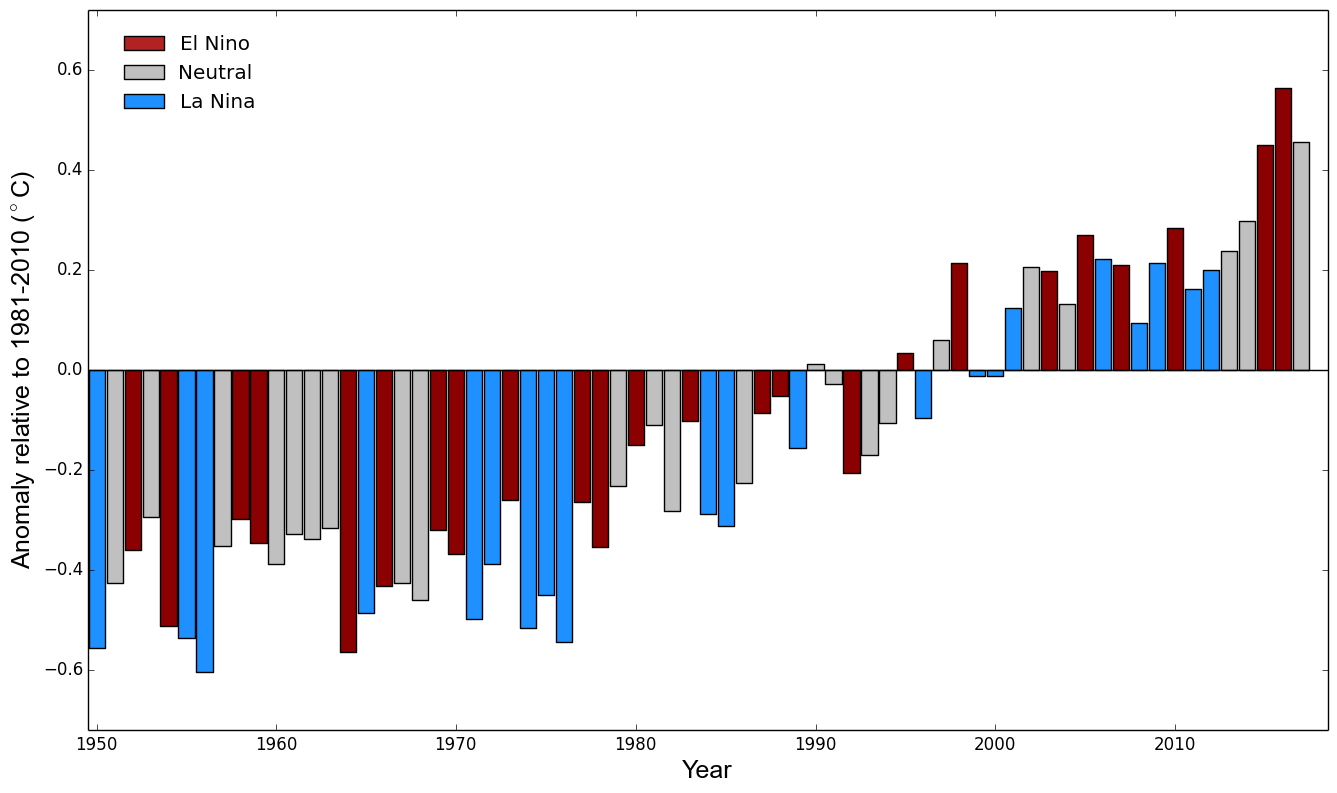 2017: the warmest year on record without an El Niño

Data from the Met Office Hadley Centre and the University of East Anglia’s Climatic Research Unit for global average near-surface temperatures confirm that 2017 was the warmest year on record without the influence of warming from El Niño.

2017 was the second or third warmest year for annual global temperatures since 1850, after 2015 and 2016, both of which were dominated by a significant El Niño.

The HadCRUT4 dataset, compiled from many thousands of temperature measurements taken across the globe, from all continents and all oceans, is used to estimate global temperature; it shows that 2017 was 0.99±0.1 °C above pre-industrial levels, taken as the average over the period 1850-1900, and 0.38±0.1 °C above the 1981-2010 average.

Dr Colin Morice of the Met Office Hadley Centre said: “The global temperature figures for 2017 are in agreement with other centres around the world that 2017 is one of the three warmest years and the warmest year since 1850 without the influence of El Niño.

“2015, 2016 and 2017 were the three warmest years in the series. In addition to the continuing sizeable contribution from the release of greenhouse gases, 2015 and 2016 were boosted by the effect of a strong El Niño, which straddled both years. However, 2017 is notable because the high temperatures continued despite the absence of El Niño and the onset of its cool counterpart, La Niña.”

The El Niño event spanning 2015-2016 contributed around 0.2°C to the annual average for 2016, which was about 1.1°C above the long-term average from 1850 to 1900. However, the main contributor to warming over the last 150 years is human influence on climate from increasing greenhouse gases in the atmosphere.

Prof Tim Osborn is the Director of Research at the University of East Anglia’s Climatic Research Unit. He said: “It isn’t only the average global temperature that matters: we can also explain the geographical pattern of the warming. Greater warming over land and in the Arctic regions, and less warming in the sub-polar oceans, are what we expect from our understanding of climate physics, and this is what we observe.”

World Meteorological Organization also confirmed 2017 as being among the three warmest years and the warmest year without an El Niño by consolidating the five leading international datasets, including HadCRUT4, which showed that overall the global average surface temperature in 2017 was approximately 1.1° Celsius above the pre-industrial era.

“The long-term temperature trend is far more important than the ranking of individual years, and that trend is upward", said WMO Secretary-General Petteri Taalas.

“Seventeen of the 18 warmest years on record have all been during this century, and the degree of warming during the past three years has been exceptional. Arctic warmth has been especially pronounced and will have profound and long-lasting repercussions on sea levels and weather patterns in other parts of the world.”

WMO will issue its complete Statement on the State of the Climate in 2017 in March, which will provide a comprehensive overview of temperature variability and trends, high-impact events, and long-term indicators of climate change such as increasing carbon dioxide concentrations, Arctic and Antarctic sea ice, sea level rise and ocean acidification.