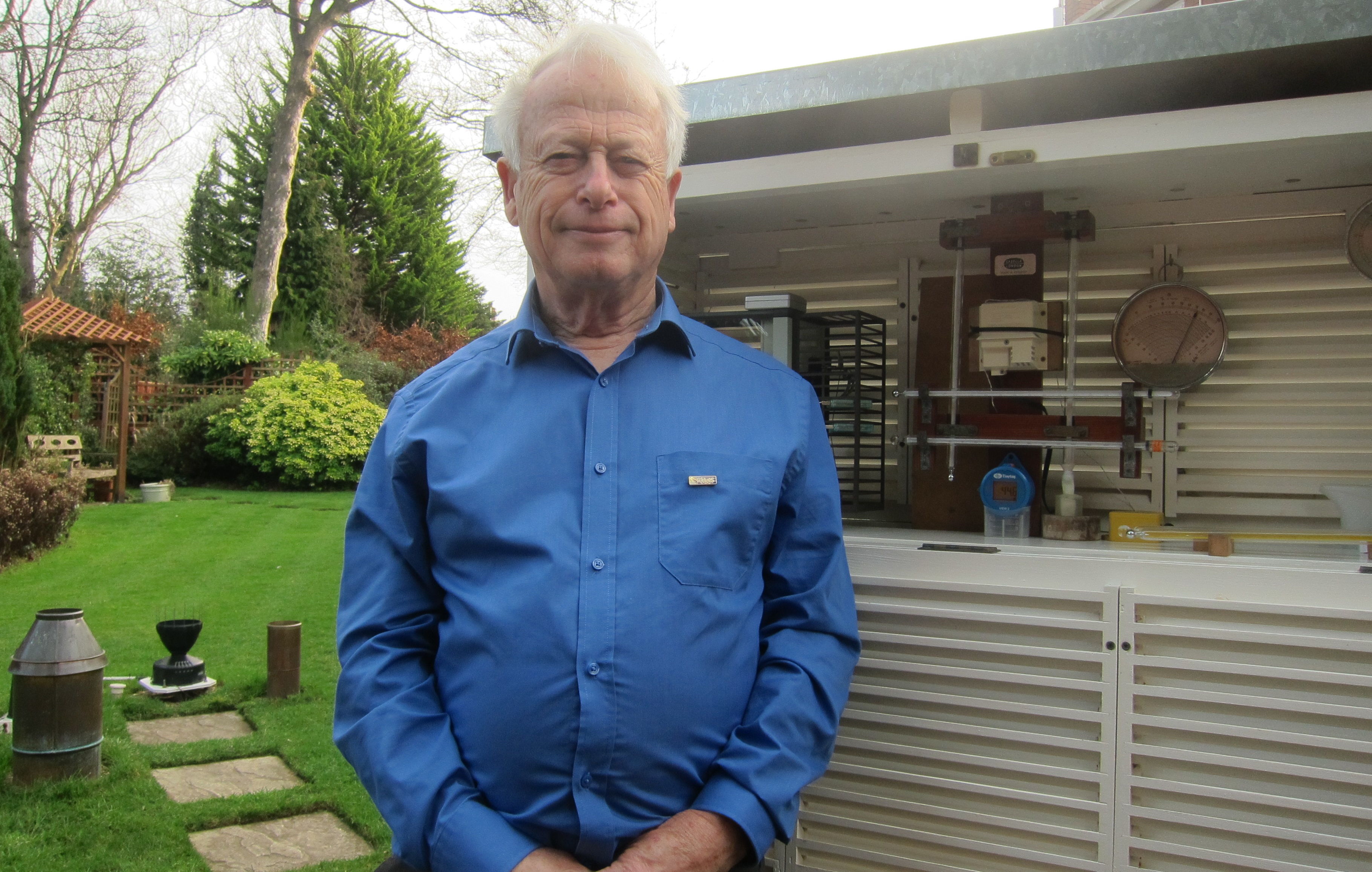 The first indication of an interest in the weather was after listening to a wintry weather forecast on the radio, and asking “Have we got any high ground in our garden, mummy?” The forthcoming snow was confined to the hills.....but a lifetime of amateur observing was beginning.

The prolonged hot and sunny summer of 1959 encouraged me to commence daily temperature observations in 1960. Severe floods in autumn 1960 quickly prompted the addition of a rain gauge; my daily figures, notes and graphical tabulation enabled comparisons to be made with nearby Manchester airport. The winter of 1962-63 was persistently very cold, with a total of 14 ‘ice days’; however, snow depths were not particularly deep in North Cheshire. I can recall milk bottles on the doorstep having protruding frozen stalks, and ice patterns on the inside of windows – there was no central heating then. The main source of weather information at that time was from the newspapers and radio – with talk about prospects of a new Ice Age, and certainly no mention of a warming climate!

Subsequently, standard instruments were installed in a Stevenson screen. A job relocation to Kent on power station construction took place in 1975 where records included the memorably hot, very dry and sunny summer of 1976, when the grass turned brown, and there was an amazing influx of ladybirds from the continent. However, the appointment of a Minister for Drought quickly brought the rain gauge back into major use in September 1976!

Next it was northwards to the Yorkshire Wolds in the cold and snowy January of 1979. I added wind recording equipment, barograph and thermograph for more detailed information. There were some notable cold and snowy winter periods during the five years there.

My professional career in engineering construction in the UK included weather-related issues; I was involved with installing remote wind-recording systems during major bridge refurbishments in exposed locations in order to monitor conditions, so that appropriate safe working practices could be developed. Also collating and presenting data for extensions to contract due to excessively inclement weather.

My present location since 1985 is in the North East. AWS (automatic weather systems) had now come within the range of amateur enthusiasts, and in the 1990’s I expanded my suite of instruments. In a major step change, a range of parameters could be recorded on a continuous basis in great detail, and subsequently interrogated and analysed. However, even if electronic, it doesn’t necessarily mean they are correct; duplication of equipment and calibration checks help to identify and prevent errors.

In 1997 I became aware that there were other like-minded weather enthusiasts around the country and I joined the Climatological Observers Link (COL) and started to share observational data with other members. I subsequently joined the Royal Meteorological Society in 2001 and when working arrangements permitted, began attending their meetings which increased my knowledge of various meteorological matters. With the aid of data from British Rainfall and Met Office records, I have compiled a local composite record back to 1890 that complements my own detailed records; the mean temperature here has increased by 0.9°C over that period.

A snapshot of notable weather events : the cold and snowy December of 2010, with a maximum snow depth of 300 mm and seven ‘ice days’ – it was the coldest locally since 1890; then in 2015 the extremely mild December which was the warmest in records going back more than 350 years!  Despite the north east coastal areas being one of the driest regions, there have been interesting rainfall events here too – my greatest daily rainfall is 82.3 mm on 1st August 2002. On 1st April (!) 2017 a storm stalled almost directly overhead and produced 40 mm rainfall which, with one exception, was the highest one day total in England for the month!  The hot summer of 2018 brought back memories of 1976, but the warmth then was more localised, and not over a such extensive European area as 2018.

I’m an active participant at the Durham and Yorkshire RMetS local groups giving a regular opportunity to discuss and network with the attendees and speakers, and be part of organising talks and occasionally giving them. I have served on RMetS Council and gained a greater understanding of the activities and working arrangements of the Society, and have volunteered at a number of events supported by the Society. Last year, under a new more inclusive scheme that now includes amateur enthusiasts, I was delighted to be elected as a Fellow.

Climate change is a major interest, manifested in a multitude of forms, together with the scientific advancements enabling identification and analysis on a multi-discipline basis; I have attended and enjoyed many Society meetings on such topics.

Future weather will continue to provide great interest for all those who observe the weather.