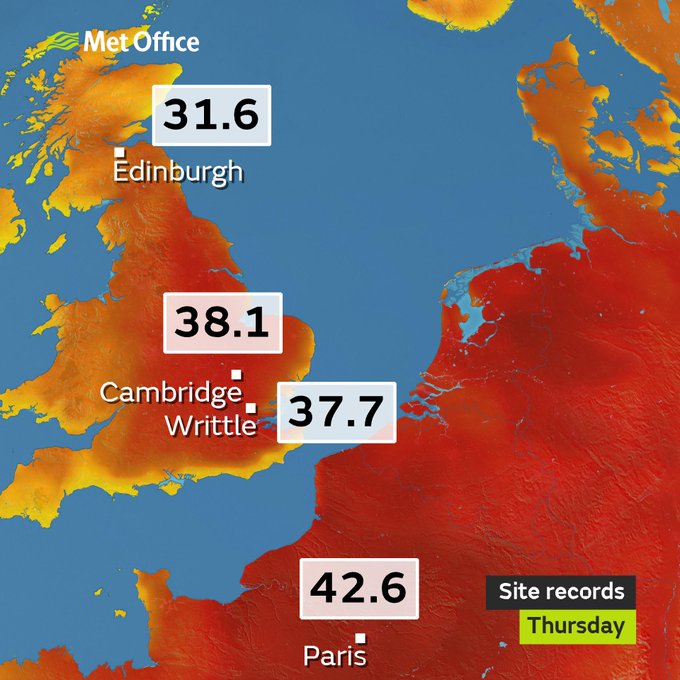 Thursday 25th July 2019 was a record-breaking day for temperatures in the UK and parts of central and western Europe; The UK's all-time temperature record was broken, with 38.7 °C recorded at Cambridge Botanic Garden. The provisional value was released on Friday but was subject to quality control and analysis, and has now been validated by the Met Office observations’ team. This figure exceeds the previous record of 38.5°C recorded in Faversham, Kent, in August 2003.

The recording was taken at the University of Cambridge Botanic Garden - which houses a Met Office climate observation site reporting every 24 hours – prompting Friday’s initial release. Some observation sites report monthly, so there is still a chance of even higher values being recorded.

No overnight records were broken, but it was an exceptionally warm start to the day for some; Temperatures didn't fall below 20.9°C in Achnagart overnight, breaking the Scottish record for the highest minimum temperature.

National records were also broken in other European countries, where temperatures have been soaring this week. After the hottest June on record, several European countries hit new highs. Germany (42.6 °C), the Netherlands (40.7 °C) and Belgium (41.8 °C) all recorded new temperature records.

Rail and air passengers suffered delays after the record-breaking temperatures caused travel chaos. Sagging overhead cables led to numerous problems across the rail network; Thameslink, which had half of its lines not running, and East Midlands Trains were among the worst affected. There were also delays and cancellations at London airports, including Heathrow.

Find out about the impacts of a warming Europe >>

Staying safe in the sun: The whys and wherefores of sun protection >>