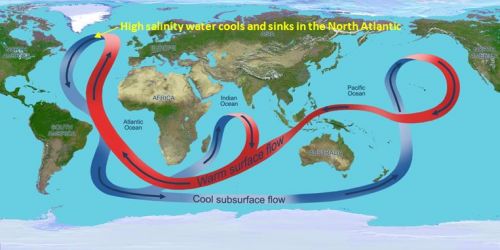 The Atlantic Meridional Overturning Circulation (AMOC) is a system of currents in the Atlantic Ocean, including the Gulf Stream that circulates a vast amount of heat from the tropics towards the North Pole disseminating the cold, saline, dense waters towards the Tropics and even further south towards the South Pole. The figure above captures that in a generalised worldwide model of thermohaline (thermo- referring to temperature and –haline referring to salt content) circulation.

Without this heat brought by the Gulf Stream, the UK climate would be colder and more variable, as it was 20,000 years ago. Scientists, who study the Earth’s past climate, discovered, that about that time, waters in the North Atlantic did not sink to the depths they sink today. This caused a weaker meridional circulation and affected the climate of northwestern Europe.

Recent research from the University of Reading found that the AMOC did slow down by 10-15% since 2004. It is believed that AMOC has been declining since 1990. Over a long period of time, slower moving ocean currents can cause cooling of the North Atlantic Ocean. Since the UK weather and climate are strongly influenced by the ocean, it could also mean drier summers for us, as there won’t be as much moisture in the atmosphere, when the North Atlantic Ocean stays relatively warm. It could also mean a colder climate, but we have to remember those changes happen slowly overtime. This changing ocean currents pattern could also mean fewer hurricanes in the Atlantic Ocean and more droughts in Sahel, Africa.

Climate Weather
What is the NAO?