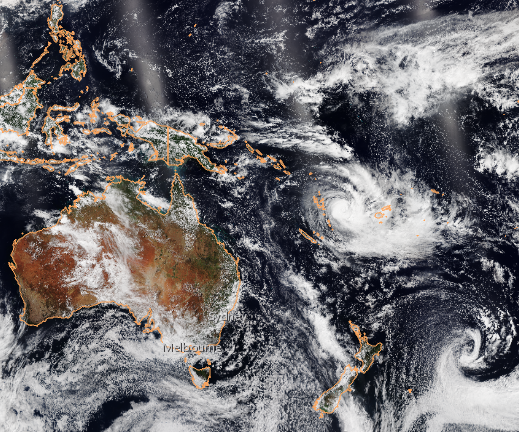 Extensive damage has been reported in Fiji as Cyclone Harold’s trail of destruction through the Southern Pacific continues.

The southern Fiji island of Kadavu had a direct hit from the cyclone, with the eye making landfall at 0100 GMT Wednesday (1:00pm local time). The Joint Typhoon Warning Center estimated the winds to be 140 mph over a 1-minute average, which would have made it the equivalent of a category 4 hurricane on the five-point Saffir-Simpson scale used to rate hurricanes in the Americas.

Harold was one of the strongest storms ever to hit Fiji, but the damage could have been even worse: the cyclone’s dangerous left-hand eye wall passed between the islands of Kadavu and the largest island of Vita Levu. In the southern hemisphere, the most destructive section of the storm is usually the eyewall to the left of the eye, known as the left-front quadrant. This section of the storm tends to have higher winds, rougher seas, and a greater storm surge.

Despite the cyclone’s eye wall missing the island, intense rainbands on its fringe swept across southern parts of Vita Levu. The heaviest rain recorded was 213mm in Monasavu, near the centre of the island, and there are also reports of at least one tornado. Roofs were torn from buildings, many areas reported heavy flooding, and the whole island lost power.

Although strong, Cyclone Harold had weakened significantly after crossing Vanuatu on Monday. Harold initially tore into Espiritu Santo, Vanuatu’s largest island, with top winds of 145 mph. However, instead of weakening as the system crossed the islands, it intensified, and just as it began to move away from Pentecost Island, the Joint Typhoon Warning Centre estimated Harold’s sustained winds to be 165 mph, transforming Harold into Earth's first Category 5 storm of the year.

Vanuatu suffered extensive damage. Flights over the northern islands revealed collapsed buildings, destroyed crops and downed trees. The Director of Oxfam for Vanuatu told Australia’s ABC that she expected the recovery process to take more than a year.

Since battering Vanuatu, dry air had infiltrated the cyclone, which disrupted its circulation causing it to weaken as it tracked towards Fiji. However, now the cyclone is once again showing signs of intensification as it heads towards Tonga.

The environment is still favourable for development, with low vertical wind sheer (similar winds throughout the depth of the atmosphere), warm sea surface temperatures of around 28 Celsius and the cyclone still maintains a strong outflow. A small cloudy-filled pinhole eye has developed, which often indicates another round of intensification.

However, things will change over the coming days, as the system tracks southeast into cooler waters and the wind sheer is also expected to gradually increase. This will cause Harold to slowly weaken.

On its current track, Harold is expected to pass very close to Tonga with winds of approximately 125 mph around 1800 GMT on Wednesday (7am on Thursday local time). Torrential rain and strong winds are almost inevitable, but hopefully the damage will be less than that suffered by its neighbouring countries.