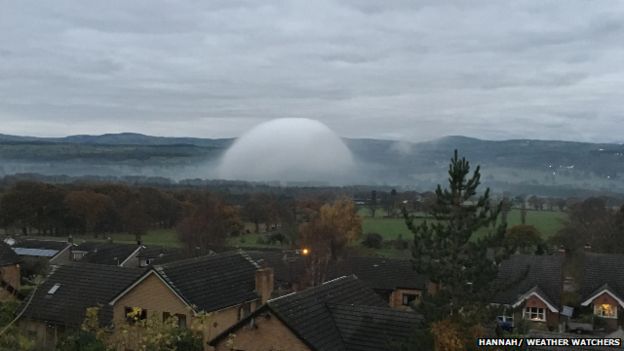 Elvis is alive and well and in Porthcawl

At the weekend I was in Porthcawl in Wales at an Elvis festival. It’s best not to ask why but suffice to say; I wasn’t a participant, just an observer. Elvis was everywhere, and for some reason, I found myself strangely drawn to the Elvis look-a-like dog show. I can safely say I have never seen anything quite like it and frankly hope to never again. There was no escape, not even in the chip shop, where Elvis serenaded us through our large cod, chips and peas.

It had been quite misty that morning, and between verses of Elvis’s greatest hits (and there are a lot of them, take it from me), the couple on the table next to us were discussing the difference between mist and fog. Despite their strange and very non-scientific discussions on the matter, I decided not to join in the conversation, but I thought I would share some thoughts with you.

Unlike the views of my lunchtime neighbours, technically, there isn’t much difference between the two. They are both caused by small water droplets in the air. The more droplets there are, the greater the density, and the harder it is to see into the distance. Meteorologically we call it mist when we can’t see beyond 1 km, and it’s fog when visibility is less than 1 km, so the terms are defined purely by how good the visibility is. Although these are the formal definitions agreed internationally, in the UK, in public weather forecasts, we call it fog when visibility is less than 180 m.

I’ve written in previous notes about fog, so I don’t want to dwell on it too much here, but I want to say a little about the physics involved. To start with, you need moisture in the form of water vapour. If the air cools, then the water condenses out to form water droplets, and that’s how mist and fog are formed, and clouds, for that matter. That sounds quite straightforward, but why does the water condense when the air is cooled? As the air cools, the water vapour molecules slow down and coalesce until it reaches a point where the water cannot remain as vapour, the air has become saturated, and water droplets are formed.

There are two principle ways in which the fog forms. The first is when warm moist air passes over a cooler surface, and the air is cooled enough for the fog or mist to form. This is quite common over the sea or in coastal areas creating what we used to call in my part of Yorkshire a sea fret. The second is on those clear sky nights when the ground surface cools radiatively. This then cools the air above it (by conduction) and often causes a thin layer of radiation fog.

In some parts of the world where they struggle for fresh water, they collect water droplets in fog wells and fog fences. I’ve seen a fog fence, or a field of them, to be more precise. I could only describe them as a field full of badminton nets. They have to be oriented in the direction of the prevailing winds, and as the mist and fog blows through them, the water droplets collect on the netting and run down to a small gutter at the bottom of the net, which then funnels into a storage barrel. Believe it or not, each net, in the right conditions, can collect hundreds of litres of water a day. There is some fascinating research going on at the moment into different polymers to coat the nets so that they can increase drop capture.

Climatologically, the foggiest place in the world is Hamilton in New Zealand, closely followed by Newfoundland. I was on holiday in Newfoundland recently and experienced it first-hand. It is not surprising they have so much fog when you have the very cold ocean waters from Labrador in the north meeting the warmer, more moist gulf stream air coming up from the south.

But I want to close by taking you back to Wales. It’s here where in December 2016, the BBC reported a fog dome, something I had never seen before, spotted one of the BBC’s Weather Watchers. It’s one of those things you have to see to believe, like something from a sci-fi movie. These features are extremely rare, at least they are to see or photograph. They form where the fog passes over a very warm, localised source of heat. The warm air forces the fog up and outwards in a bubble shape as it rises away from the ground. Sadly they are very short-lived because of the conditions they need to form and tend only to last for 5 to 10 minutes.

By the way, I didn’t say anything about haze, which is a very different process altogether to mist and fog, and for another day. It must be because I’m all shook up, ah-ha.