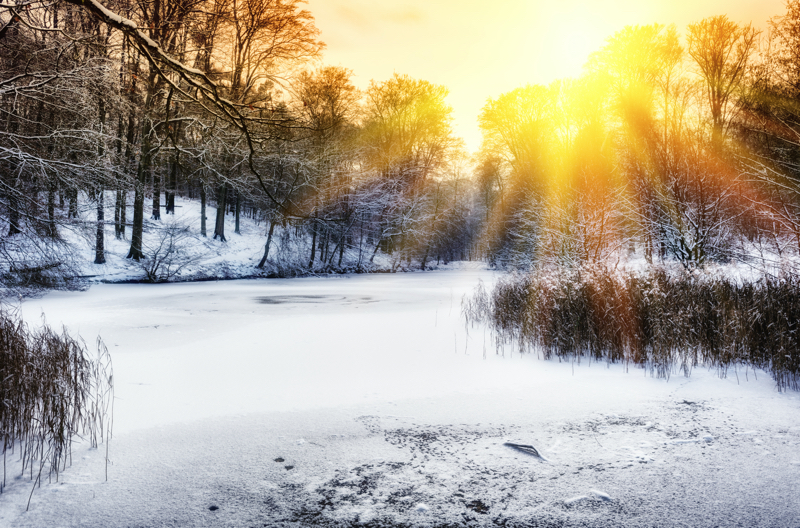 I used to ask this question at job interviews.  All candidates were science graduates but on only a handful of occasions have I had answers that are close to the truth.  Most often the conversations went something like this.

Interviewer:  Why do ponds freeze from the top down?

Interviewee:  When the air above the pond is below 0⁰C, it cools the top surface of the pond.  The top surface cools to below 0⁰C and freezes. Ice is less dense than liquid water and stays at the top.  As the cooling continues the ice will gradually thicken.

This answer appears quite plausible, but it is incorrect.  The real solution is trickier than you might think!

The key here is to consider what happens before ice has formed.  Cooling a substance makes it ‘heavier’ or, more correctly, increases its density.  In the case of a pond, the cooled ‘heavier’ water should sink to the bottom. The lowest temperatures should be found at the bottom of the pond with ice forming in this area.  However, it is a unique property of water that its solid form, ice, is ‘lighter’ (less dense) than its liquid form, water.  The reasons for this are a bit complicated, but it is well known. Therefore, ice that formed at the bottom would float to the top. This is also plausible, but not what is observed!  Clearly, we have missed something, which I am going to call ‘the weirdness of water’.

While water is all around and is essential for life, it is without doubt the weirdest substance you come across in everyday experience.  The pressure and temperature range in our atmosphere allow it to exist in all three of its phases (solid, liquid and gas) at the same time. This alone is a property unique to water.  But another strange property is the missing piece for which we are looking. It shows up if you measure the density of liquid water carefully as its temperature falls. Initially, density increases, as we would expect, until the temperature reaches 4⁰C.  Below this point, density starts to decrease until ice forms at 0⁰C.  The maximum density of liquid water occurs at 4⁰C i.e., water at 2⁰C is ‘lighter’ than water at 4⁰C.  Armed with this new information, let us consider our pond.

Initially, the top surface is cooled to 4⁰C and this water then sinks to the bottom of the pond. It is replaced by warmer water from below.  Cooling is transferred throughout the pond by convection. This is an efficient way to transfer energy within a liquid and the process continues until…

,,,the whole pond is at around 4⁰C.  Cooling of the top surface continues.  The surface water becomes ‘lighter’ than that below, so the circulation stops. Now heat transfer is only by conduction, i.e. cold water directly touching warm. This is an inefficient process in liquids and the cooling becomes more and more concentrated in the upper layers.

Eventually, the top surface reaches 0⁰C and ice forms. Note that the bottom of the pond remains at around 4⁰C throughout the process.

This property of water has large effects, especially on the ecology of cold regions.  Some fish and amphibians use the stable environment at the bottom of ponds to survive cold winters.  Polar bears and many seals require floating ice to catch their food.  From a global perspective, floating ice reflects much of the sun’s radiation back into space, thereby cooling the planet.  One consequence of global warming is to reduce the extent of floating ice, leading to greater absorption of solar energy and even less ice and so on, an example of a positive feedback loop.

...and you get all this from a frozen pond, isn’t science marvellous!

About the Author: Frank Barrow

Frank describes himself as an old school ‘weather enthusiast' whose interest was sparked by a day darkness event when at school in Darlington, Co Durham on 2 July 1968.

He has recently retired from the Met Office after a career of 39 years, during which he worked as an observer in the 1980s, a forecaster in the 90s and, since 1996, as a trainer at the Met Office College. Frank describes the latter role as “fitting him like a glove”, so he stayed... for almost 25 years! During that time, he was involved in the training of the vast majority of current Met Office forecasters, or operational meteorologists, as they are now known.

His enjoyment of “looking at meteorological topics from unusual angles” promises further interesting contributions to these pages in future. As Frank says, “it is amazing what you can learn by simply thinking carefully about what you can see”.