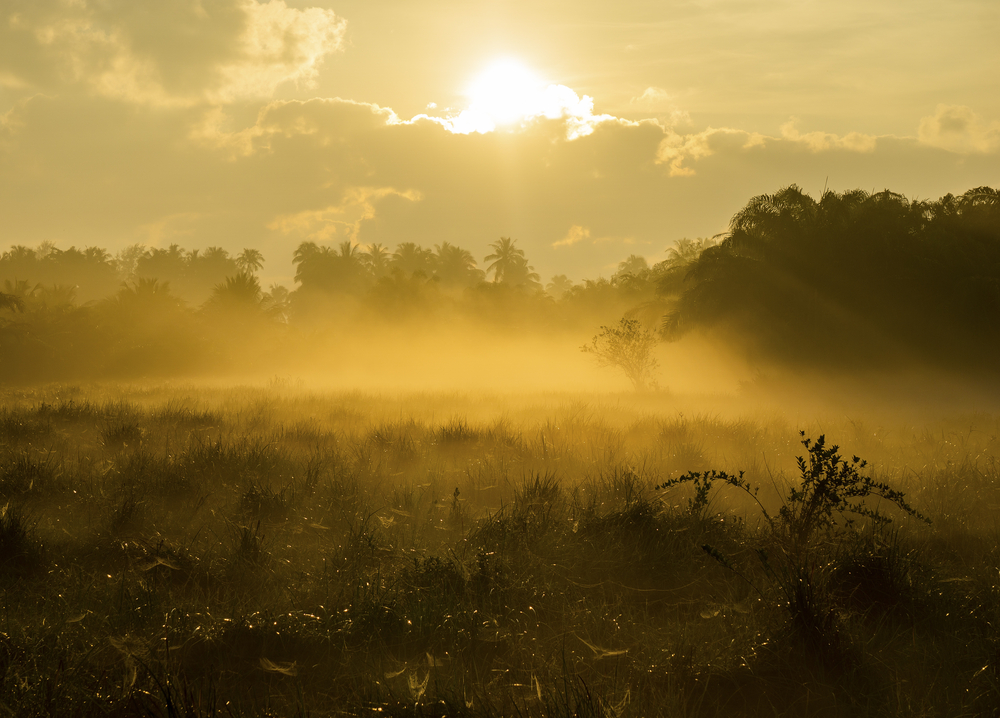 In simple terms, fog is cloud at ground level. It can cover vast areas, vary in density and thickness, and, like clouds, comprises of various types.

Fog forms when the saturation point of the air near the ground is reached - this means that the air contains the maximum amount of water vapour that it can hold for that specific temperature and pressure; therefore, this invisible water vapour condenses into liquid water droplets (with an average diameter between 0.01-0.1mm) which hang in the air.

For fog to form, dust, sea salt, or other air pollutants must be present. Water vapour condenses onto these microscopic particles and forms fog – in the same way as clouds, and ultimately rainfall is formed. Thickest, or densest, fog occurs in areas where there are many microscopic particles, such as industrial areas or over the sea. But, of course, thick fog can obscure even the largest structures.

Mist and fog are often used interchangeably - and they are closely related - but there is a crucial difference which depends on how far you can see through them. This is called visibility and forecasting it is essential, not only for shipping and aviation but also for the public, as driving conditions are affected.

Fog can be defined as a suspension of water droplets that cause obscurity in the surface layers of the atmosphere. The more water droplets suspended in the air, the lower the visibility. The term fog is used when visibility is less than 1 km. This distinction is agreed upon internationally for aviation purposes. However, for the general public, forecasters frequently use the term fog to describe when visibility is less than 180 m. Mist typically dissipates more rapidly, even with slight winds. Interestingly, it can also describe your breath on a cold day.

The difference between fog and mist

Fog and mist are both a suspension of water droplets that cause obscurity of the air, but the distinction is how far you can see through them:

Haze also causes obscurity but is a different phenomenon – it is a suspension of extremely small, dry particles in the air, i.e. dust, smoke, but not water droplets.

Fogs are generally classified according to the physical process which produces the saturation or near-saturation of the air. Common types of fog are:

Radiation fog typically occurs in high-pressure situations and is associated with clear skies, temperature inversion (increasing air temperature with height, the opposite of the normal situation) and calm winds. This type of fog forms in the evening when the heat absorbed by the Earth’s surface during the day is radiated into the atmosphere, which then lowers the temperature of the air near the surface. As the air cools, its ability to hold moisture decreases. Once the dew point is reached (the temperature below which water droplets begin to condense), condensation occurs, small water droplets start to develop and ultimately, these droplets form a shallow layer of fog. Some people call this type of fog ‘ground fog’. It usually burns off soon after sunrise.

In the UK, it is particularly common in autumn and winter; in latitudes where the sun is very low in the winter sky, such as north-west Europe, it can persist all day long. Radiation fog commonly forms near sources of moisture, such as lakes, streams and rivers. However, it does not form over seas since the temperature of the sea surface stays relatively constant throughout the day and overnight.

Advection fog occurs when warm, moist air passes over a cool surface, which cools the air to dew point, thus forming fog. This process is called advection, and in meteorology, it describes the movement of air. It typically occurs when a warm front passes over an area with snow cover and in places where warm, tropical air meets cooler oceans – for example, ‘sea fog’ commonly occurs in California. If the wind blows in the right direction, then fog can be transported over coastal land areas to form ‘coastal fog’, common along the eastern coast of the UK in spring and summer. It is known locally as Haar in eastern Scotland, whilst in Eastern Scotland and eastern England, the coastal fog is referred to as Fret.

Conversely, evaporation fog results from cold air passing over warmer water or moist land. When the warmer water evaporates into the air it is in contact with, it warms the air causing convection which allows the warmer air to rise and mix with cooler, overlying air up to a metre or more. This warmer, moist air then cools again, allowing condensation and fog to form.

It can often lead to freezing fog (which forms in the same way as normal fog, but at temperatures below freezing, and as such is composed of supercooled water droplets which remain liquid even though the temperature is below freezing-point), and sometimes rime (a rough white ice deposit which is formed by supercooled water droplets of fog which freeze on contact with surfaces such as fence posts, pylons and overhead wires).

It is a localised type of fog. Examples include cold fronts or cold air masses moving over warm seas (common in autumn as seas are still warm after the summer) - this is known as ‘sea smoke’ - or as cold air moves over heated swimming pools or hot tubs. An alternative name for the latter fog is ‘steam fog’, which occurs when cold air flows over water that is around 10ᴼC warmer than the air.

Upslope fog, or ‘hill fog’, forms when air is forced to rise up a slope. This is called orographic uplift and causes the air to cool as it rises, allowing the moisture to condense and form fog.

As the name would suggest, valley fog forms in valleys, usually in winter. It develops when cold, dense air sinks and settles in lower parts of a valley, the water vapour condenses, and fog forms. The surrounding topography prevents the air from escaping, or warmer air passes above the valley, causing a temperature inversion. Valley fog can persist for several days in calm conditions and has been known to cause health problems, mainly when vapour condenses around air pollution.

A ‘pea souper’ is a type of fog that forms when water condenses around pollution particles. It gets its name from its brownish-yellow appearance. Pea soupers are common in areas that burn coal for energy. For example, the Great London Fog of 1952 killed 12,000 people in the city, resulting in the Clean Air Act regulating the coal industry and air pollution.