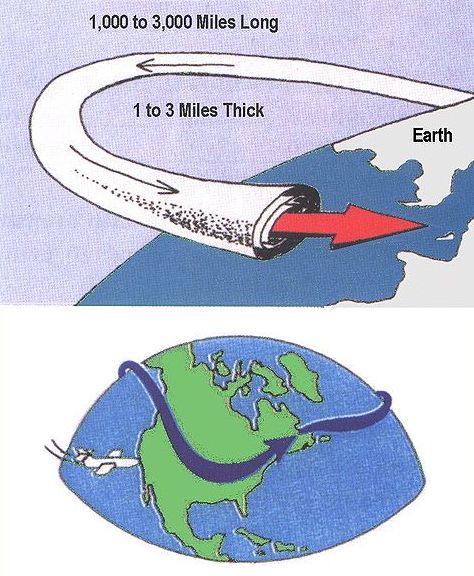 Jetstreams are discontinuous, narrow currents of strong winds in the upper atmosphere. The polar jetstream is of special interest to meteorologists because of its association with the regions where warm and cold air masses meet, and weather systems develop bringing wind and rain.

Atmospheric scientists had theorised the existence of jetstreams since the early 1900s. One of the first names associated with the jetstream is Wasaburo Oishi, a Japanese meteorologist, who discovered the jetstream in the 1920s while using weather balloons to track upper level winds near Mount Fuji. As World War II approached its conclusion, the US introduced the first high-altitude bomber plane called the B-29, which flew at altitudes well above 20,000ft and air force meteorologists were assigned the task of producing a wind forecast for aircraft operations at such altitudes. To make their prediction, the meteorologists used primarily surface observations and what is known in meteorology as the “thermal wind” relationship. Using this relationship, the meteorologists then predicted a 193mph wind from the west at high altitude. Their commanding officer could not believe the estimate but on the next day, the B-29 pilots reported wind speeds of 196mph from the west. The term ‘jetstream’ was first used by a German meteorologist, Heinrich Seilkopf, in 1939.

The polar-front jetstream encircles the globe at altitudes between 30,000 - 43,000ft above sea level in segments thousands of miles long, hundreds of miles wide, and several miles thick. It is strongest in winter when core wind speeds can reach 250mph. Jetstreams exist because of the huge temperature contrasts between the polar regions of the planet and the equator. There are two jetstreams in each hemisphere, the polarfront jetstream in the mid-latitudes and a relatively weaker, subtropical jetstream at lower latitudes.

On average, winds associated with the jetstream blow from west to east in both hemispheres, but the position can vary from week to week. These changes in location of the jetstream are associated with changes in the surface pressure patterns. The polar jetstream positioned over the North Atlantic, is related to the North Atlantic Oscillation (NAO) – fluctuations in the surface pressure patterns – that have a particularly strong impact on the weather in UK and across Europe. Prevailing westerly winds provide a moderating, maritime influence, keeping us warm in winter and cool in summer. However during a negative NAO event, when the jetstream shifts further south, the maritime influence is lost leading to bitterly cold winters, such as the winter 2009/10.

The jetstream flow can also meander north to south in a wavelike pattern - known as planetary, or Rossby, waves. When the jetstream meanders north and south, two distinct weather patterns are formed. As the air mass moves north it starts to spin clockwise forming high pressure weather system associated with settled weather, and when air moves south it spins anti-clockwise forming a low pressure weather system with unsettled conditions. A Rossby wave can therefore lead to a string of alternating high and low pressure systems, with the jetstream snaking around them from west to east.

In certain conditions the meandering Rossby wave becomes stationary leading to a persistent weather pattern. During the summer 2007, a low pressure system remained stationary over the UK and led to widespread flooding, while just downstream high pressure dominated across the Mediterranean and Eastern Europe leading to heatwaves and a drought. When the Rossby wave becomes too large it cuts off the high pressure system from its origin in the subtropics leading to a blocking pattern. If this happens in winter, the blocking leads to a bitterly cold spell, as the mild westerly winds are replaced by cold continental air from the east. When it happens during summer, it can lead to a drought and a heatwave.