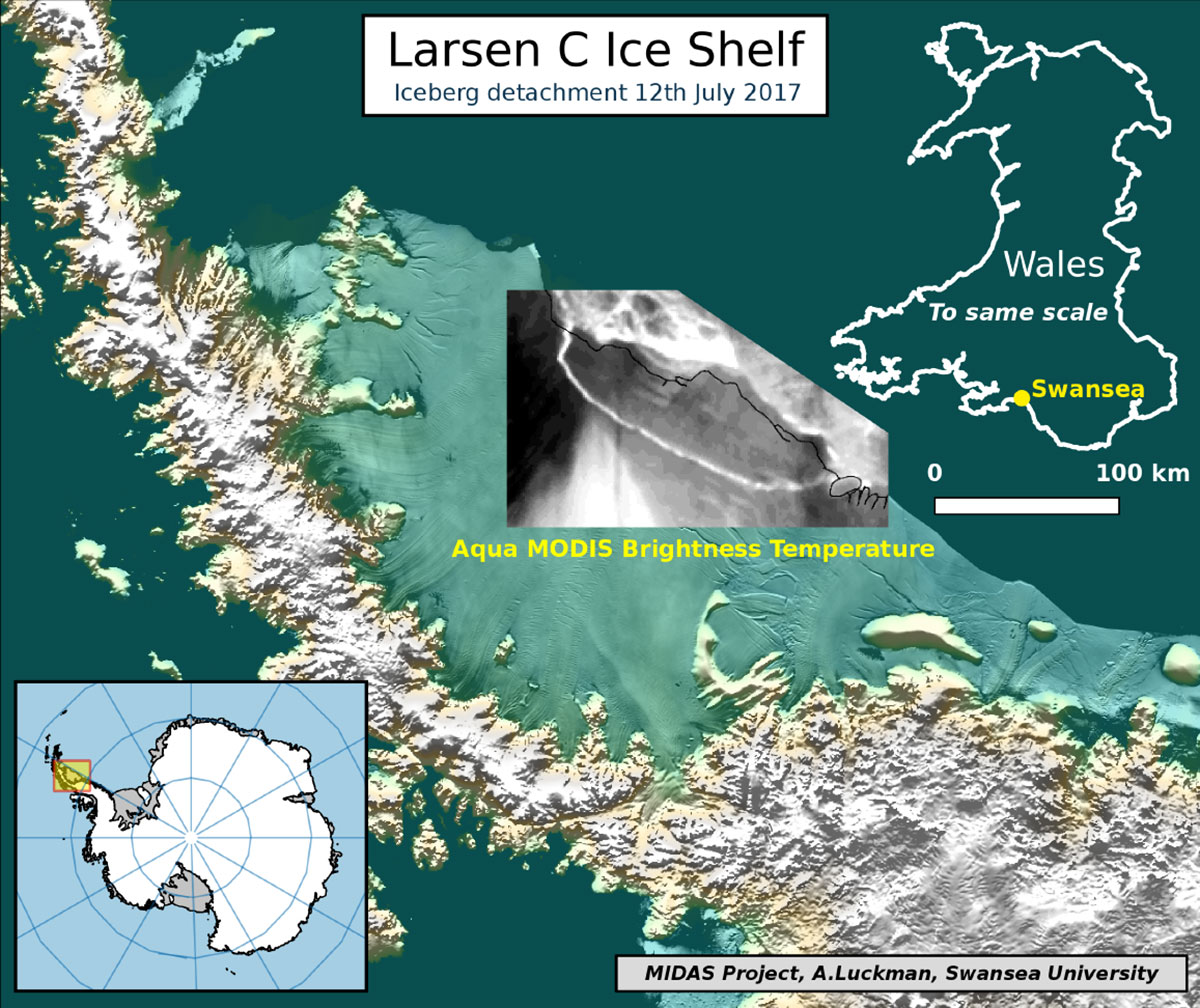 On 12th July, satellite data confirmed the ‘calving’ of a trillion-tonne, 5,800 km2 iceberg – one of the largest icebergs on record, more than a quarter the size of Wales - from the Larsen C ice shelf on the Antarctic peninsula.
Larsen C ice shelf - a floating mass of ice hundreds of metres thick which is attached to a huge, grounded ice sheet - is now 12% smaller in area than before the split and is at its lowest extent ever recorded, dramatically changing the Antarctic landscape.  It follows previous collapses of Larsen A ice shelf in 1995 and Larsen B in 2002.

The calving event is the result of a huge crack that grew over a number of years, but in May and June this year it extended significantly, reaching a rate of >10 metres per day.

The new iceberg (likely to be named A68) is now adrift in the Weddell Sea, and is thought to be among the 10 largest icebergs ever recorded.

“We see one large [iceberg] for now. It is likely that this will break into smaller pieces as time goes by,” said Adrian Luckman, Professor of Glaciology at Swansea University and leader of the UK’s Midas project which is focused on the state of the ice shelf.

“It is a really major event in terms of the size of the ice tablet that we’ve got now drifting away,” said Anna Hogg, an expert in satellite observations of glaciers from the University of Leeds.

Although a huge new iceberg might look dramatic, experts say it will not itself result in sea level rises. “It’s like your ice cube in your gin and tonic – it is already floating and if it melts it doesn’t change the volume of water in the glass by very much at all,” said Hogg.

There is, however, enough ice in Antarctica to produce a sea level rise of 60 metres if it all melted. Although the calving - a natural event - does make the ice shelf vulnerable, it is not a sign that the ice shelf is about to disintegrate; it may continue to shed icebergs, or it might even regrow.

Climate
State of the Global Climate 2020
The World Meteorological Organization (WMO) has recently issued its latest report on the state of the global climate in 2020. It shows that 2020 was close to the warmest year ever, with plenty of records tumbling.

Climate
Dry Aprils
Occasional dry Aprils are one thing, but a run of 14 of them one after another ...?

Climate Weather
What is the NAO?
It's all about the surface air pressure over the North Atlantic.....

Climate Weather
Hurricane in Space
Weather happens 'out there' too.