Rainclouds and carved pumpkins, Part 2 - Where is the driest place in Scotland and Northern Ireland at Halloween?

For people that put a lot of effort into their fancy dress, a rainy Halloween can mean nothing short of a disaster. What are you going to do with all that running face paint!? Knowing how wet a given Halloween could be might help you to plan your evening. Should your fancy dress include a trusty pair of wellies? We took a deep (spooky) dive into the data offered by the Met Office Hadley Centre to find out. Since wellies are also good to protect oneself from the mud, we compiled the data for the last eleven days of October, in case Halloween night itself turned out to be relatively dry. In Part 1, we’ll have a look at the rainfall in eerie England and wicked Wales. Part 2 will do the same but for scary Scotland and nightly Northern Ireland.

The historical rainfall data from the Met Office is divided into regions. For part 1, these are 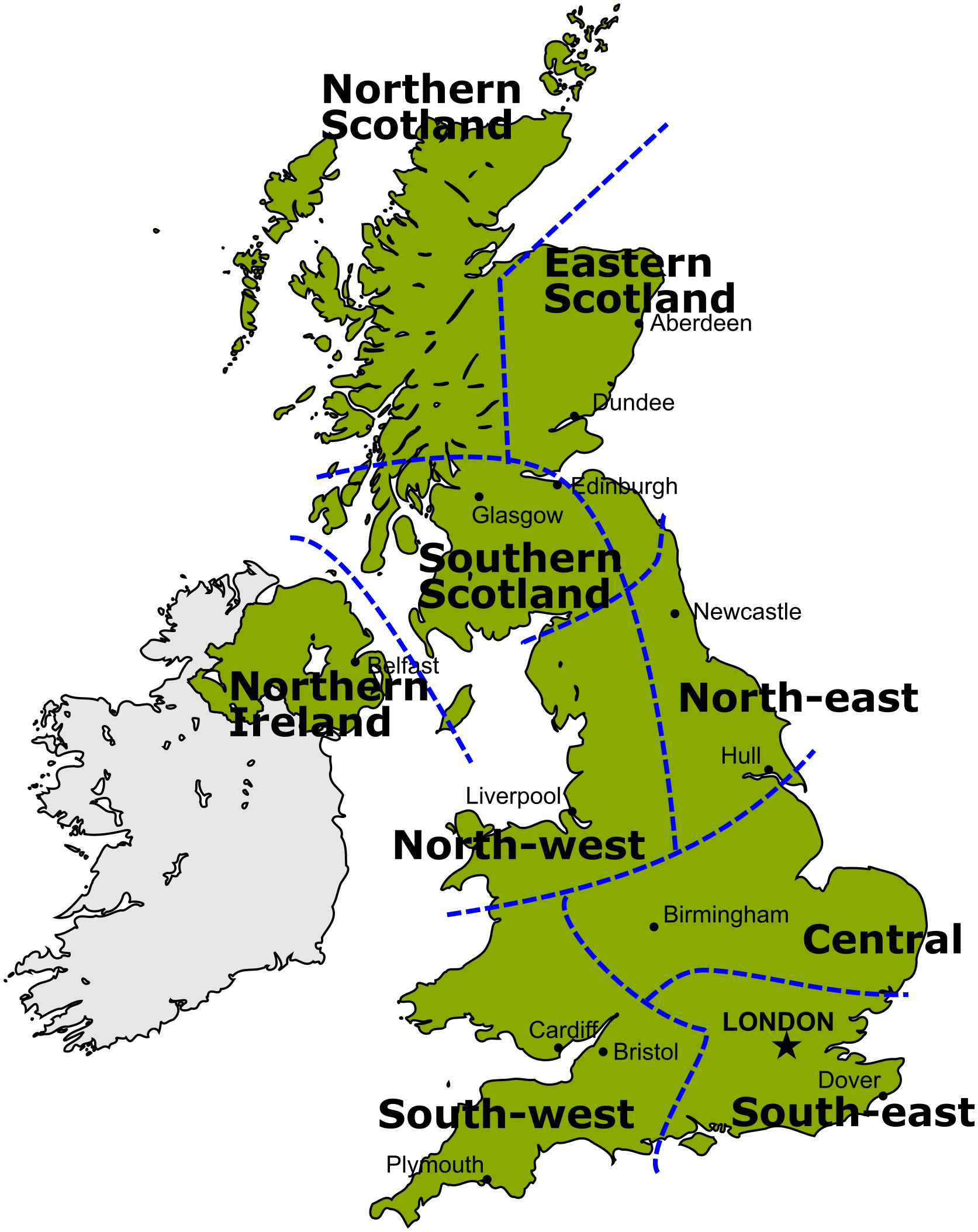 Map of the United Kingdom showing the approximate delineations of the regions presented here. The data from the Channel Islands is not included in the Met Office analysis. Map adapted from Met Office, Alexander and Jones (2000).

The folks from the Midlands can probably tell you that Halloween night is usually quite dry. The Met Office records reveal that the 1981-2010 total rainfall average for the day is only 2.0 mm. In 2018, it was wetter than this, as a total of 3.85 mm of rainfall was recorded. On average, the days leading up to Halloween in the Central region of England can be much drier than the southern counterparts (27.2 mm). The lead-up in 2018 was dyer than normal, when a total of 17.52 mm was recorded. 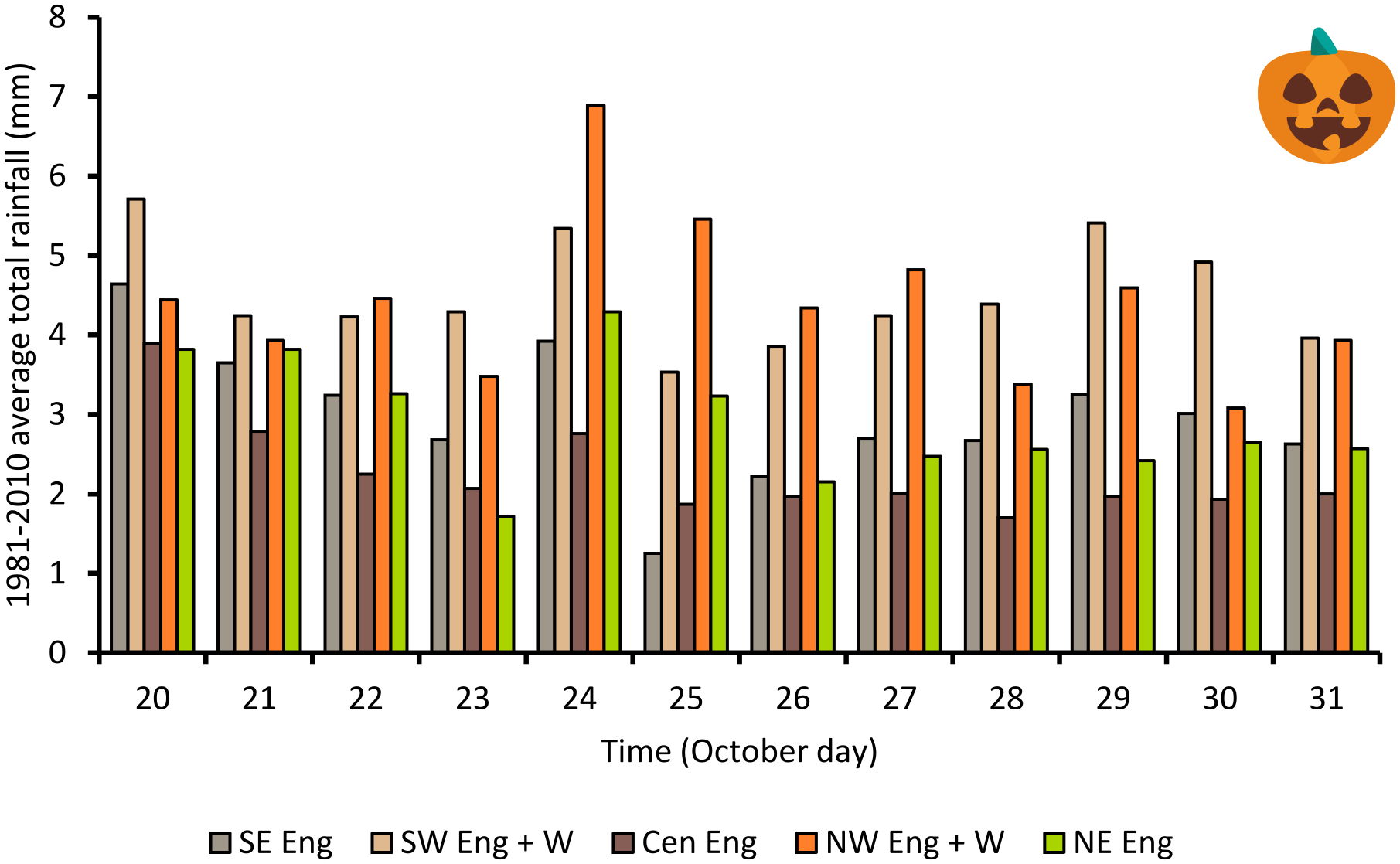 Daily total rainfall for the days leading leading to Halloween for the English and Welsh regions. Data source: Met Office

Unsurprisingly, the region that encompasses both Cumbria and North Wales is quite rainy. The 1981-2010 average total rainfall for North West England and Wales in Halloween is 3.93 mm. The total rainfall for the area on Halloween 2018 was, however, almost double that (7.58 mm). The build up to the day can also be also be quite damp, with the average total accumulation being 52.81 mm. Although the 2018 Halloween itself was much rainier than the average, the accumulation from the days prior was much less than usual (16.46 mm), so the trick-or-treaters were probably okay with a pair of trainers.

Finally, the Met Office data shows that the counties of Northumberland, Tyne and Wear, Durham and Yorkshire received an average total rainfall of 2.57 mm in the Halloweens of 1981-2010. Last year was drier than average, with 2.10 mm being recorded. The average accumulation prior to Halloween was 34.97 mm, with 2018 also being drier than average (22.56 mm).

So, what’s the verdict? The data shows that, on average, the Midlands are dryer both in the days leading up to Halloween and on the day itself. Maybe we can suggest dressing up as a desert wonderer. The wettest region in England and Wales is the South West. It probably wouldn’t hurt the folks in Falmouth, Bristol and Cardiff to pack their wellies. Maybe you can be (scary) firefighters!