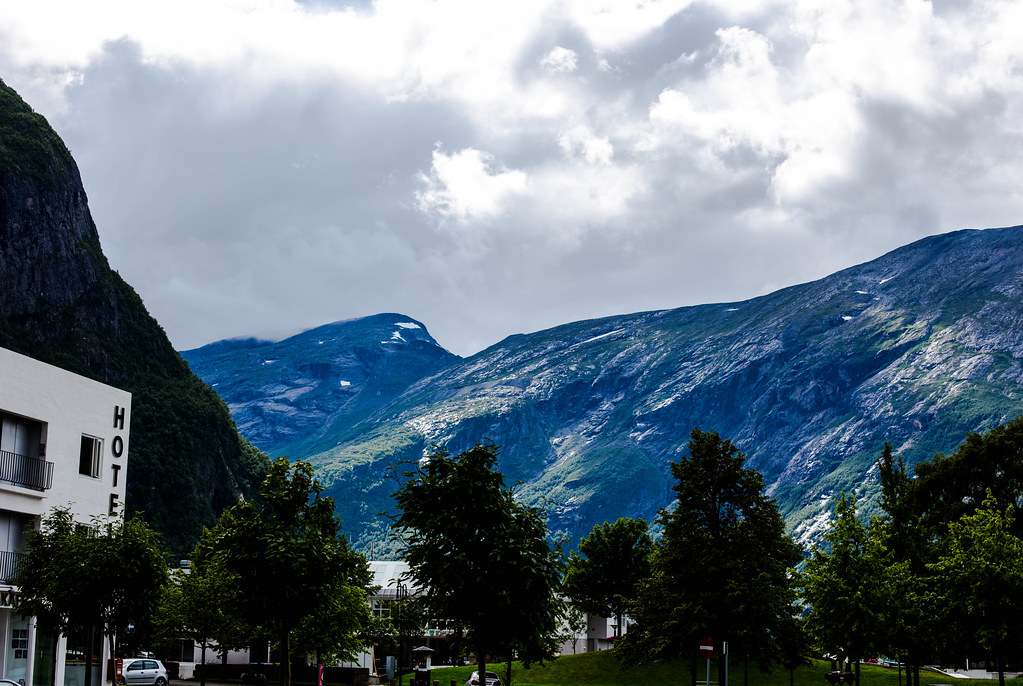 A New Year brings new records.
Just two days into 2020, a new high temperature record was set in Norway. In the small town of Sunndalsøra, the weather felt more like mid-summer than the bleak depths of winter, as temperatures soared to 19.0°C. This was the highest temperature ever recorded in January in Norway, beating the previous record of 17.9°C reported in Tafjord in 1989.
As you might expect, Norway is normally pretty cold in winter. It is slightly milder than its latitude suggests, thanks to the warming effect of the Gulf Stream, a warm Atlantic Ocean current that follows the eastern coastline of the US before heading towards Europe, and its extension, the North Atlantic Drift. However, even with the moderating current, the average maximum temperature in the western city of Bergen in January is still only 3.6°C.
Norway is very long and thin, with plenty of mountains along its coastline. You don’t have to move very far inland before the warming effect of the sea is lost. In Sunndalsøra, which is only about 40 miles inland, the average January maximum temperature is several degrees lower than the western fringes, at -0.6°C.
At the beginning of the year, however, temperatures across the region were a lot warmer than their averages. This was due to the jet stream, a thin ribbon of air high in the atmosphere which acts as a barrier between the cold air in the north and the warm air in the south. The jet stream had meandered north, allowing warmer weather which is normally over central Europe to bleed northwards into Scandinavia.
At midnight in Norway, as the New Year was sung in, temperatures for many places were well above freezing, In Trondheim, for example, where the average minimum January temperature is -6.5°C, as the bells struck midnight, the temperature was hovering at +6°C.
Clearly the weather was very mild, but it isn’t that unusual for the jet stream to stray to the north of Norway at this time of year, so this alone wouldn’t have been enough to generate a record-breaking temperature. An extra push was needed, and this came from the what’s known as the Föhn effect.
As I mentioned earlier, Norway is very mountainous even close to the coast. Sunndalsøra may only be 40 km inland, but there are still very high mountains to its southwest, some towering over 1500m high. On 2nd January, when the temperature soared to 19.0°C, the winds over these mountains were gusting to nearly 50 mph.
As air is forced across a mountain range, it expands and cools due to the decrease in pressure with height.  As the rate of evaporation falls as temperature falls, at some point the air becomes cold enough for the rate of condensation in the air to be faster than the rate of evaporation, and any water vapour in the air condenses to form clouds. Condensing water releases heat into the air, and rain and snow falls on the windward side of the mountain. The air therefore dries as it crosses the mountains and on the downward slope, there is less moisture left to evaporate into the air as it descends and warms. So, less heat is taken from the air in evaporating the cloud droplets than was added to the air by the condensation of the droplets on the upwind side of the mountain.
This warming effect is known as the Föhn effect and the higher the mountain range, the greater the difference in temperature on either side of the mountain. The Föhn effect was responsible for the greatest ever recorded temperature change in 24 hours, when on 15 January 1972, the temperature in Loma, Montana, USA, rose from −48°C to +9°C. The winds had changed direction and started to blow over the Rockies. In North America this wind is known as the Chinook or the Snow Eater, and they cause rapid melting, and even sublimation (direct evaporation) of snow.
As the winds howled in Norway at the beginning of this year, the warm air was helped down into the bottom of the Norwegian valleys by turbulence. Similar to river water passing over rocks, turbulence is also generated in the air when it passes over mountains. This mixes the air vertically and helps to spread the warmth very close to the surface, forcing the warm air right down into the valley where Sunndalsøra stood.
The winds need to be from exactly the right direction for the Föhn winds to take effect and as the 2 January drew to a close, the winds swung round, becoming more westerly than southwesterly. This removed the effect of the mountains and the warm air also shifted to the east. The warm weather abruptly, and at midday the following day, the temperature was 0°C. Normal winter weather had resumed.