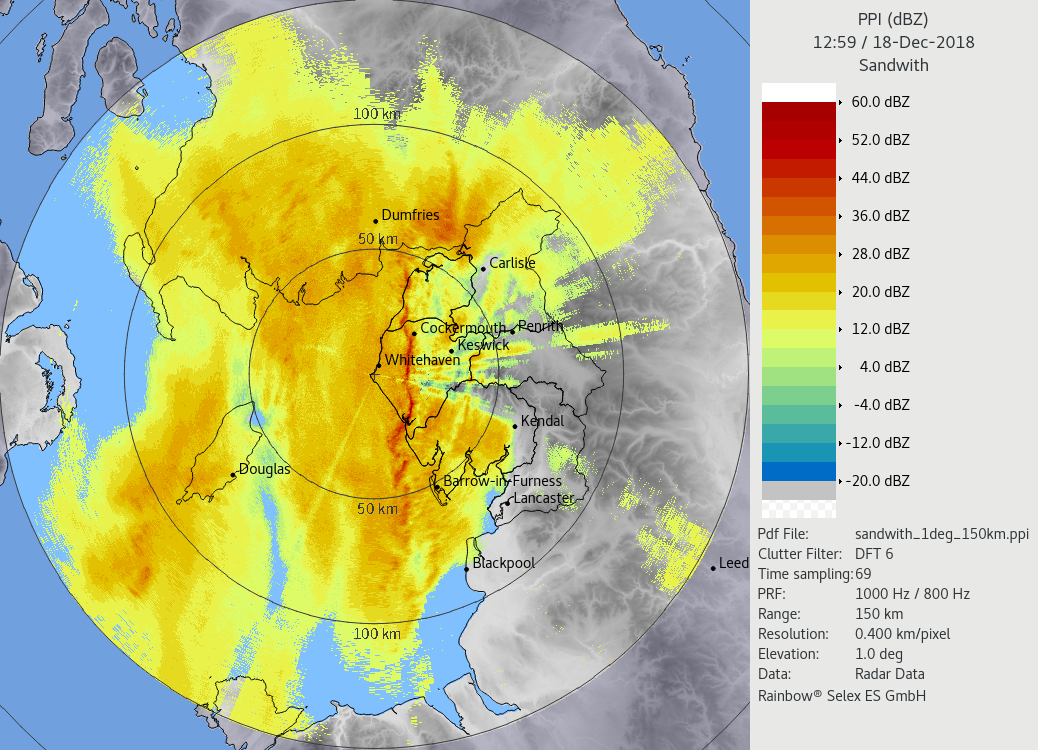 Even three days after Storm Ciara hit the UK, some people are still feeling the effects of the weather. Two people lost their lives in the storm, tens of thousands of homes lost power and despite new multi-million pound defences, flood water inundated several Yorkshire towns.
With 179.8 mm of rain reported in Cumbria and a gust of 97 mph recorded at the Needles on the Isle of Wight, clearly Ciara was a force to be reckoned with. Some of the most destructive weather was delivered by squall lines; violent bursts of weather which not only bring strong winds and torrential rain, but also have the potential to bring hail, thunder and sometimes even tornadoes.
A squall line is easily recognisable on a radar image as a line of very intense rain. They can be more than 100 km long and can keep their structure for several hours as they sweep across the landscape.

Whereas a gust of wind will typically last just a few seconds, by definition, a squall of wind must last at least one minute. The increase in wind must be at least 16 knots (18.4 mph) to a speed of at least 22 knots (25 mph).
Squall lines are usually seen either just ahead of or within a cold front, as the air at the surface needs to rise to a height that will trigger condensation. The dense, heavy air of a cold front forces the air ahead of it to rise, which can provide the required lift.
As the air rises, it expands, cools and condensation occurs. This makes the air lighter, forcing it to travels upwards faster, enabling the cloud to grow rapidly.
As the saying goes, what goes up must come down, and behind the rising air is the descending air, known as the downdraft. When rain falls from the cloud, it drags air downwards with it, including air that is surrounding the cloud. This air is drier than that within the cloud, so some of the precipitation will evaporate into it, and this will cool the air further, thereby increasing its speed towards the ground.
As the cold, dense air from the top of the thunderstorm hits the ground, it spreads out in all directions, including ahead of the storm. This leading edge of downdraft is known as the gust front, and is where the winds suddenly increase.

As the gust front pushes ahead of a cold front, the warm, moist air standing in its way is forced upwards, feeding into the storm cloud as an updraft and helping it to become self-sustaining.
Sometimes you can see a squall line from the ground. It can form an ominous shelf cloud, showing a line of cloud where the updraft condenses. 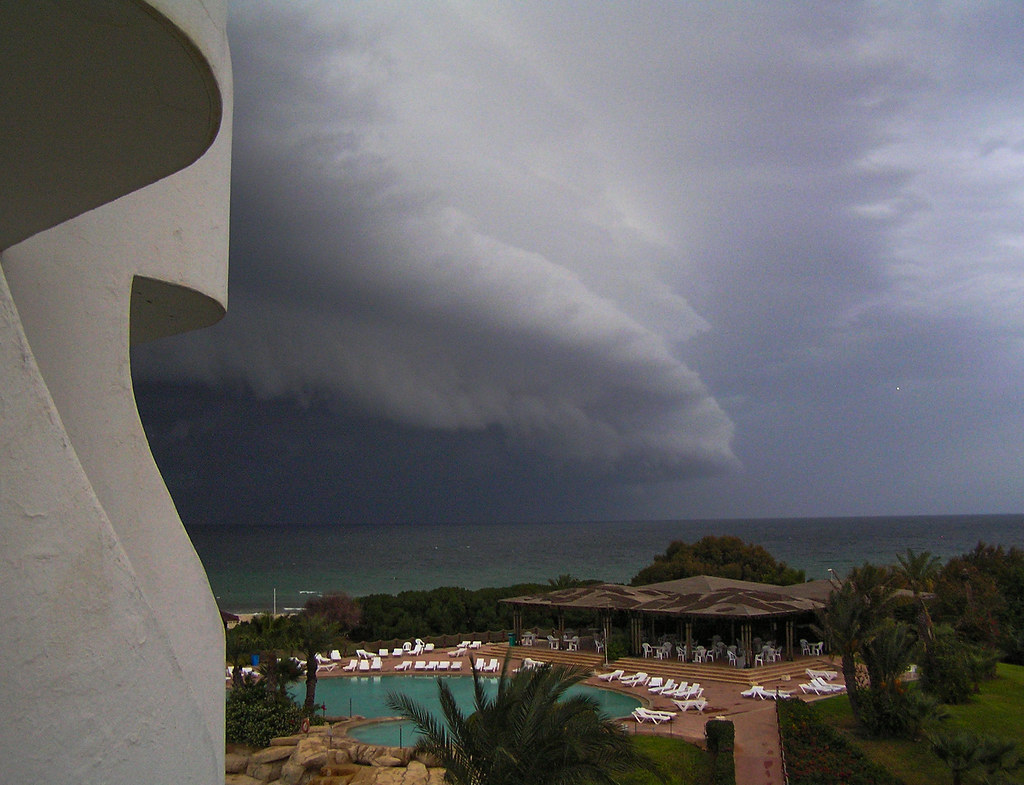 "Theres a storm a brewing" by Andrew Gibson. is licensed under CC BY-NC-SA 2.0

If you are in a dusty place such as the desert southwest of the USA, then it can form a wall of dust, known as a haboob. 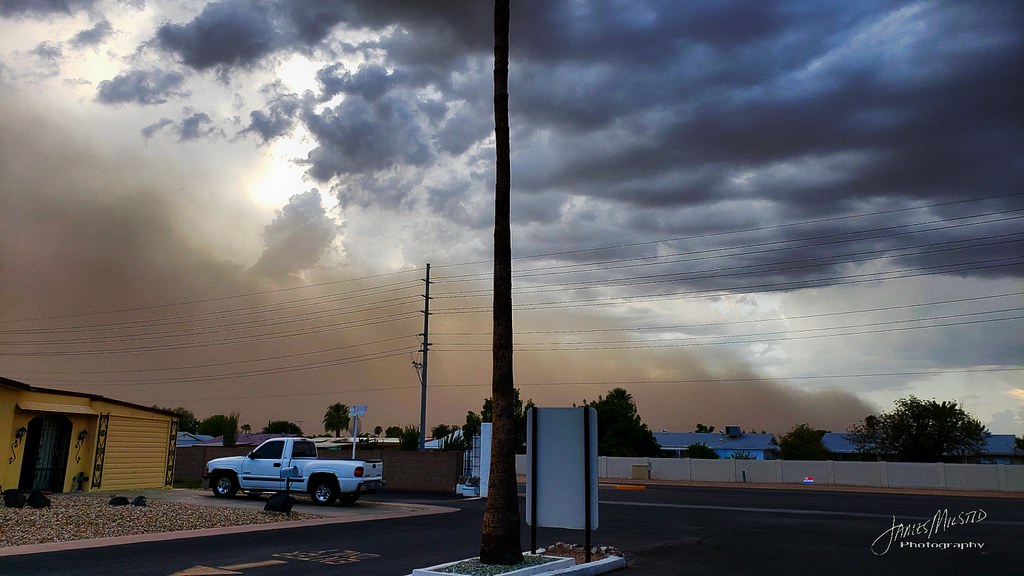 "Hoboob in Peoria, Arizona" by James Milstid is licensed under CC BY-NC-SA 2.0

At other times they can be more difficult to identify, which can make them even more dangerous. One minute the weather might simply be wet and windy, the next, the wind picks up and the rain reduces the visibility to just a few hundred metres making treacherous driving conditions.
During Storm Ciara, not only did the squall line bend a London crane like spaghetti and give the final tug to tear the roof from the Duxford airfield hanger onto the M11 in Cambridgeshire, but it also caused a dramatic drop in temperature. In Scampton in Lincolnshire, the temperature dropped 6°C in just 7 minutes as the squall line went through.
This weekend another storm is due to hit the UK. Storm Dennis is expected to bring gusts of up to 70 mph around the coasts of England and Wales and up to 60 mph inland. More rain is also expected, including to parts of Yorkshire which have already been flooded by Storm Ciara. A series of cold fronts are expected to cross the UK during the storm, so there is a chance that more squall lines will develop.
This article was contributed to theWeather Club by our guest author, Steff Gaulter.