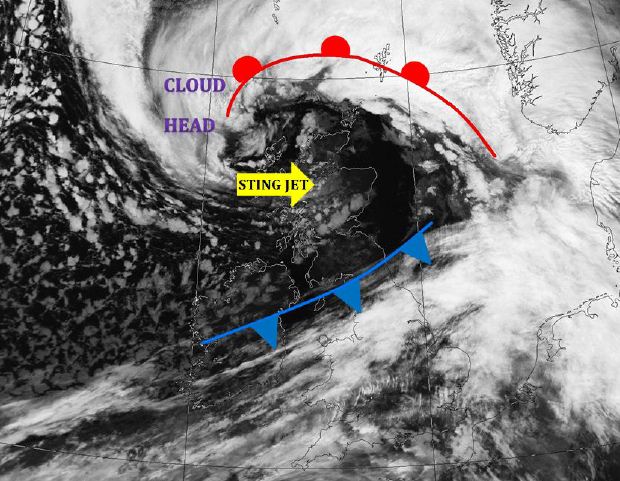 What is a sting jet?

A sting jet is an isolated area of particularly strong and damaging wind. A jet of fast-moving, cold, dry air descends from higher in the atmosphere, accelerating as it descends and hits the ground near the centre of the depression.

Where do sting jets occur?

Sting jets are found in depressions which are slightly different to the classical ‘Norwegian model’ of depressions. In depressions with sting jets, there is a gap or fracture between the fronts, which has led to them also being known as ‘the poisonous tail of the bent-back occlusion’.

Why haven't you heard of a sting jet before?

Sting jets are an area of active research, becoming part of weather forecasts as our understanding of them improves. It is only in recent years that atmospheric observations and computers have been good enough to allow meteorologists to observe and study sting jets. The first sting jet to be identified retrospectively occurred in the October 1987 storm which battered the south of the UK. 32 of the 100 most intense storms between 1993 and 2013 were also associated with them, as were at least 6 of the 12 major storms which hit the UK in the winter of 2013/2014, causing widespread flooding and damage. You can read more about it in this article in Weather magazine.