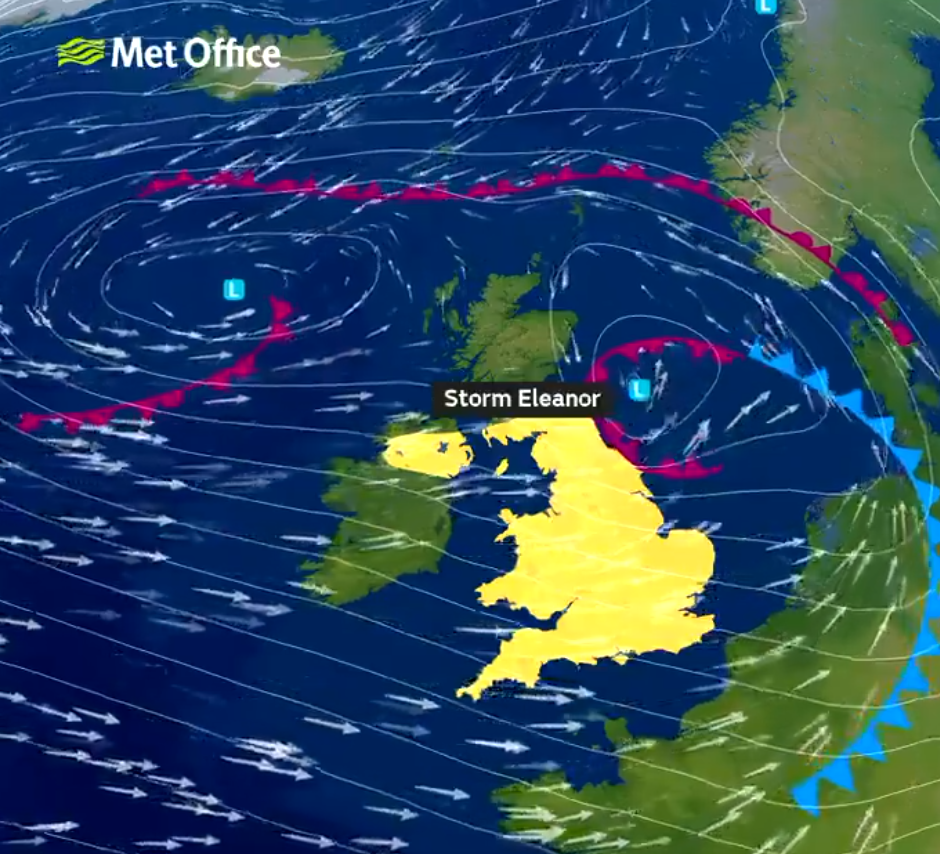 Storm Eleanor causes disruption at the start of 2018

On 2nd and 3rd January, a low-pressure system moving across from the Atlantic brought very wet and windy weather to the UK.  Storm Eleanor, the fifth named storm of the season, brought gusts of up to 100 mph, leaving thousands of homes without power, blowing over trees and disrupting travel across parts of Wales, England, southern Scotland and most of Northern Ireland.

There was also flooding in Galway in the Republic of Ireland, where 97mph gusts were recorded. Northern Ireland Electricity Networks said trees, branches and other flying debris had brought down power lines and poles, affecting homes in southern counties. On the UK mainland, the Met Office recorded gusts reaching 100mph in Great Dun Fell in Cumbria and 77mph in High Bradfield in South Yorkshire. In England, about 1,000 homes in Yorkshire were left without power and more than 1,200 properties in Devon, Somerset and Cornwall affected. Several major bridges were closed due to high winds and there were numerous reports of fallen trees blocking roads, including the M25, as well as overturned vehicles on some roads. There have also been numerous train delays. Whilst in northern France, 200,000 homes were without power with Paris among the affected areas.

Forecasters have said that whilst the strongest winds from Storm Eleanor have now passed, it will still be windy for a while, with some further disruption likely. As such, the Met Office's yellow warning for severe weather is in force for much of the UK until 18:00 GMT on the 3rd Jan. There are blustery winds and showers continuing through the afternoon, some of them heavy with hail and thunder. The Environment Agency said the combination of strong winds and high tides could cause some coastal flooding in the UK. There are currently 30 flood warnings in place in England, 10 in Wales and 15 in Scotland.

Measuring Wind Speed : What is anemometer?