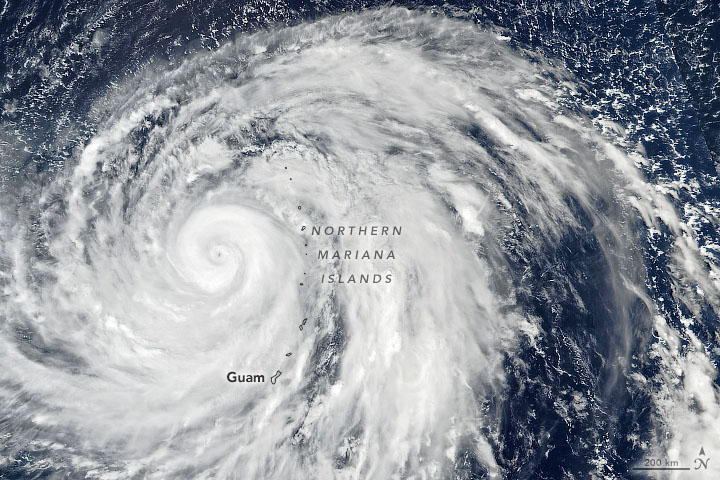 The clear up operation is continuing after Typhoon Hagibis hit Japan on 12th October with wind speeds up to 225 km/ hr and torrential rain, leaving at least 74 dead and tens of thousands of people displaced. In the town of Hakone, 939.5 mm of rain fell in just 24 hours.

Whereas we are used to hurricanes in the Atlantic being given the names of people, storm names in the western North Pacific are now drawn from a list of generic words.

In the late 1960s Herb Saffir and Robert Simpson devised a classification convention to relate the observed damage due to a North Atlantic tropical cyclone with the peak surface winds or minimum surface pressure (two measures of the "intensity" of a tropical cyclone) and storm surge in vulnerable coastal locations. The classification system became known as the "Saffir–Simpson Scale" and has become shorthand for describing the destructive power expected from tropical cyclones around the world. For example, hurricane Katrina in 2005 was a Category 5 Hurricane, whereas 2017’s Hurricane Ophelia was only Category 3.  In the western North Pacific, a different scale is used – ‘Typhoon’ is roughly equivalent to Category 2/3 on the Saffir-Simpson Scale, and ‘Super Typhoon’ to categories 4/5.

Hagibis grew from a tropical storm to a category 5 typhoon between October 6–7 and achieved Super Typhoon status on 7th October. However, it had been downgraded to a category 2 equivalent Typhoon by the time it made landfall at Shizuoka in Japan at 0830 UTC on 12th October.  Hagibis had an exceptionally small eye.

You can see an animation of the path of the tropical cyclone at https://en.wikipedia.org/wiki/Typhoon_Hagibis_(2019)#/media/File:Hagibis_2019_both_landfalls.gif .

For most people around the world not directly impacted by the typhoon, it will be remembered for its impact on the 2019 Rugby World Cup and Japanese Grand Prix.

This typhoon comes near the end of the 2019 Pacific typhoon season, which has seen a number of records broken including Typhoon Wutip, which was the strongest February typhoon on record.

On the other hand, the 2019 Atlantic hurricane season has been relatively quiet, with just 2 Category 5 hurricanes – Dorian and Lorenzo, and no Category 4 storms.