February was a rather cold month, with a mean temperature of just 2.4°C, 1.3°C below the 1981-2010 average. It began rather unsettled but became dry and mild mid-month. However, as February drew to a close, the ‘Beast from the East’ took control (from the 25th Feb onwards) as high pressure set in over Scandinavia, and cold and snowy weather became the predominant features. Despite this, rainfall was 73% of average and sunshine 137% of average, making it provisionally the second sunniest February in the UK since 1929. 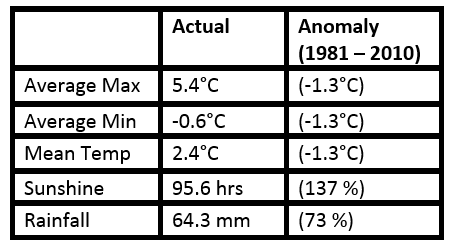