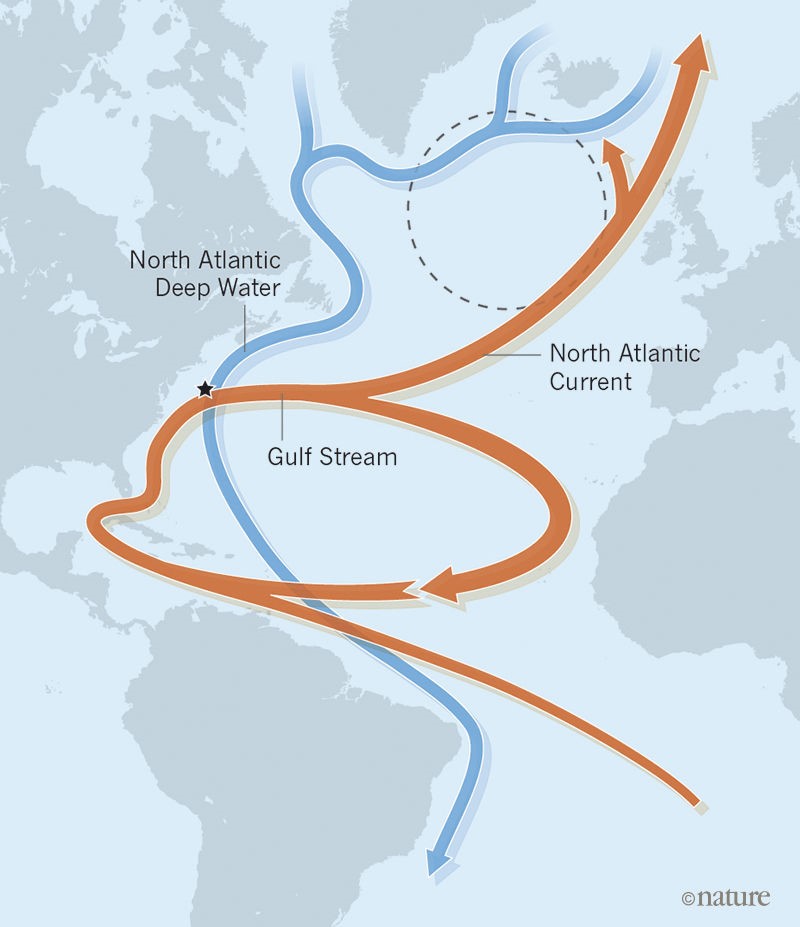 The warm, saline waters of the Gulf Stream meander northeasterly across the Atlantic Ocean, eventually forming the North Atlantic Current.  During winter, these salty waters cool and descend – it is this deep convection that is a key part of the Atlantic meridional overturning circulation (AMOC), the ocean conveyor belt. This conveyor belt is essential for heat exchange between the ocean and the atmosphere - it releases heat into the atmosphere above the North Atlantic Ocean then travels through the ocean, resurfacing in other areas of the world. The varying strength of this system is thought to have major impacts on the global climate; indeed, it has been implicated widely in past abrupt climate changes.  Direct measurements of the modern AMOC flow rates have shown a decline in its strength over the past decade.

New evidence suggests that this circulation system is in a weakened state that is unprecedented in the past 1,600 years.  Two recent papers published in Nature, Caesar et al. and Thornalley et al., report on past AMOC variability using different approaches.

Caesar et al. analysed sea surface temperature (SST) anomalies in the North Atlantic subpolar gyre (dashed line in the image) to infer changes in AMOC flow in the past century. Although the link between the relatively cool SSTs of the North Atlantic’s subpolar gyre and a slowdown of the AMOC have been studied previously, the main advance of Caesar et al. is their comprehensive comparison of global SST data sets with state-of-the-art, high-resolution climate models. They infer that the slowdown in the AMOC was probably a response to warming caused by anthropogenic greenhouse-gas emissions. A possible mechanism could be enhanced melting of the Greenland Ice Sheet, which adds fresh water to the surface ocean and reduces the density of the water that drives deep convection.

Thornalley et al. provide a longer-term perspective on changes to AMOC. They used ‘proxy’ measurements of silt in sediment cores (the black star on the image shows the approximate location at which the sediment cores were collected) to reconstruct the flow speed of the AMOC in the past 1,600 years. They combined this approach with past, near-surface temperature anomalies recorded in the marine sediments to provide additional constraints on the AMOC and found that the strength of the AMOC was relatively stable from about ad 400 to 1850, weakening around the start of the industrial era, coinciding with the end of the Little Ice Age. Thornalley et al. infer that the weakening of the AMOC at that time was probably a result of the input of fresh water from the melting of Little Ice Age glaciers and sea ice.

Despite the different time periods explored, both studies conclude that the modern AMOC has weakened by about 15% with the main culprit in both scenarios is surface-water freshening. However, they differ in the details of how and when the AMOC’s decline commenced, with roughly a 100-year difference.