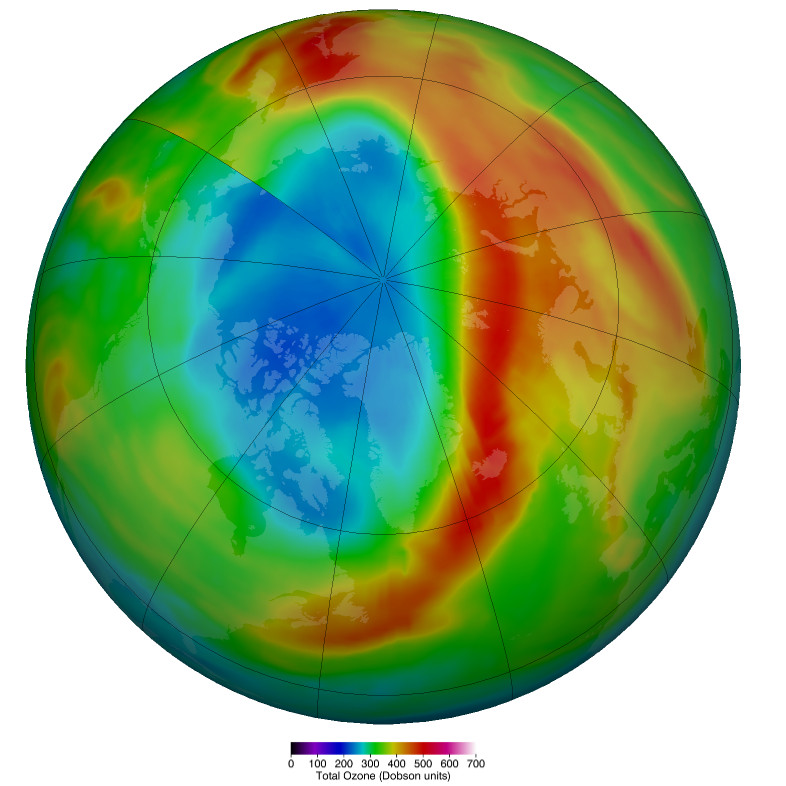 A large area of ozone depletion has taken place over the Arctic. Usually in early spring, as the sun climbs higher in the sky, the temperature in the stratosphere above the Arctic increases and this prevents the chemical reactions that break up ozone. However, this year a large area of ozone has been eroded and this loss has intensified over the past few weeks.

Ozone is a naturally occurring gas. Over 90% of it is found in the stratosphere, between 10 and 50 kilometres above the Earth, in what’s known as the ozone layer.

The ozone layer is a very important part of the atmosphere. It absorbs ultraviolet radiation from the Sun which would otherwise reach the Earth’s surface and re-emits this as infrared radiation. This heats the stratosphere and plays a vital role in determining the structure and circulation of the atmosphere. It also protects life on Earth, because the ultraviolet radiation it absorbs is harmful and has the potential to cause the destruction of chlorophyll in plants as well as to cause skin cancers and eye cataracts in humans.

In the 1970s, scientists realised that some of the chemicals being used in industrial processes and consumer products were capable of destroying ozone. In 1985, scientists from the British Antarctic Survey reported a startling reduction in the amount of ozone above Antarctica in the Southern Hemisphere’s spring. This became known as the ‘ozone hole’.

A worldwide agreement called the Montreal protocol was reached in 1987, which governs the production and consumption of all ozone-destroying gases. This protocol has been very successful and it is expected that in the middle of the 21st Century, the abundance of ozone-depleting gases should fall to values that were present before the Antarctic “ozone hole” began to form in the early 1980s. Signs of improvement were already being seen in 2018.

These ozone-destroying chemicals are substances which contain chlorine and bromine, such as CFCs and HFCs. They are generally benign, but they undergo a chemical reaction when they come into contact with polar stratospheric clouds, or nacreous clouds. These are the clouds that can sometimes be seen in the night sky, as they are high enough to be illuminated by the sun long after sunset at the ground, and have a distinctive ‘Mother of Pearl’ appearance. They only form when the temperature in the stratosphere is below -78°C.

In contact with these nacreous clouds, the benign chlorine and bromine compounds break down into more active forms, such as chlorine monoxide and bromine monoxide. In the darkness of the polar winter, these can collect harmlessly in the stratosphere, but as soon as the sun returns in spring, its UV radiation triggers ozone-destroying reactions using these molecules as catalysts. In each reaction, an ozone molecule is lost but the catalyst survives. This results in a swift, dramatic reduction in ozone.

Although depletion in ozone has been observed in the northern hemisphere, it is far more pronounced in the southern hemisphere. This is mostly due to geography, as there is much less land in the Southern Hemisphere, and the Antarctic is roughly circular. This means that air can flow around the southern parts of the globe unhindered and a tight circulation can form in the stratosphere, known as the polar vortex. Temperatures within the polar vortex can drop extremely low, cold enough to allow nacreous clouds to form.

In the Northern Hemisphere, on the other hand, the movement of air is disrupted by mountain ranges in North America, Europe and Asia. These disturb the polar vortex and prevent it from becoming as intense as that over the Antarctic. This means that the stratosphere above the Arctic is not always cold enough for nacreous clouds to form.

Even away from nacreous clouds, the distribution of ozone within the ozone layer is not uniformly distributed. It is transported around the globe by the wind, so its concentration and distribution is continually shifting. For example, in November 2019 and January 2020, a small depletion was noticed over Europe. Such small, temporary depletions are usual and regularly observed.

However, the current depletion in the Arctic region is more pronounced and more persistent. It covers the same area as the unusually strong and cold polar vortex that has been prevailed this winter, over northern Canada, Greenland, and the Arctic Ocean. Therefore it is more similar to the ozone hole over Antarctica,than the usual temporary depletions seen in the northern hemisphere.

As the sun continues to warm the stratosphere in the northern hemisphere, it will soon be too warm for nacreous clouds to form. The ozone-destroying processes will gradually reduce, allowing ozone levels to return to the average. Levels of ozone this low are unlikely to be seen for many years.

For more information see this article on our schools' website, MetLink and this article from Severe Weather Europe.