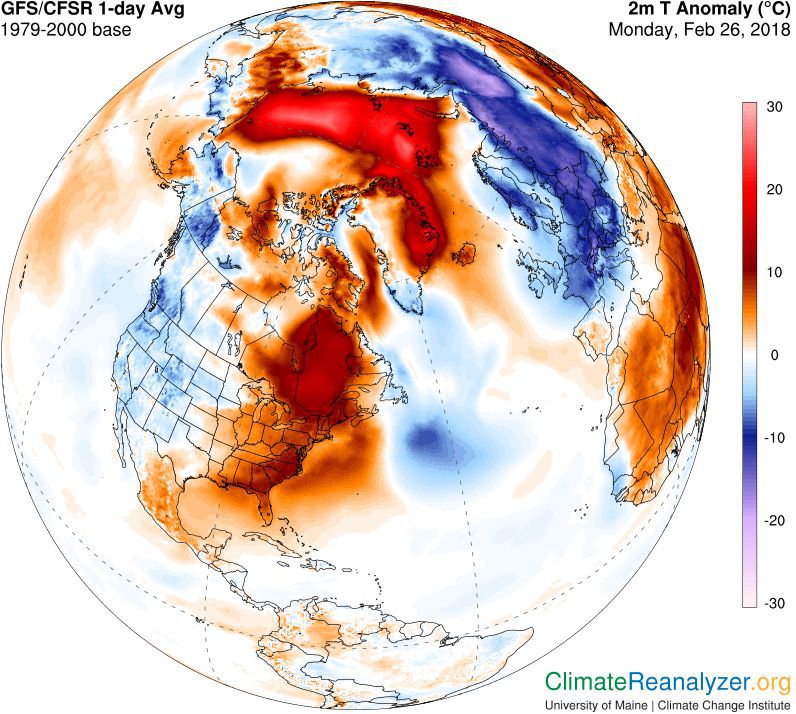 Unusual warming around the North Pole has sent a blast of cold Arctic air across Europe. A rare snow storm hit Rome this week and many other parts of Europe are also being blasted by bitter easterly winds from Siberia, including the UK.

On the northern tip of Greenland, the Cape Morris Jesup meteorological site has had a record 61 hours of temperatures above freezing so far in 2018, linked to a rare retreat of sea ice in the Arctic winter darkness. Around the entire Arctic region, temperatures are now about 20°C above normal, at -8°C.

And although the Arctic has seen temperatures climbing for decades, the past few years have seen the most extreme changes. "For years, absolute values of temperatures have become higher and higher, but if you look a couple years back it's not so interesting whether the temperatures were minus 10 degrees C or minus 5 degrees C because the temperature was still well below zero," Martin Stendel, a climate scientist at the Danish Meteorological Institute, said.

So what's causing the Arctic's ‘heatwave’? A combination of warm weather patterns coming into contact with retreating sea ice and rising and warmer sea levels are causing these elevated temperatures. The Arctic's shrinking sea ice has enabled southerly winds to travel for longer stretches without being cooled.

Whilst the Arctic warms up however, most of Europe has been hit with bitterly cold winds.

Jason Box, an American scientist and professor of glaciology at the Geological Survey of Denmark and Greenland, said "A new pattern that we think is part of climate change is where the normal so-called polar vortex that keeps the cold air bottled over the Arctic ocean, that cold air is spilling out... now that's being displaced."

In 1973, a study suggested that an ice-free Arctic Ocean could make regions further south colder. This “warm Arctic, cold continent” pattern is sometimes dubbed ‘wacc-y’ or ‘wacky’ among climate scientists.

"The pattern that we have seen over the last 10 years is that the Arctic Ocean has been warmer than normal, and Northern Eurasia is colder; we call it 'cold continents warm Arctic.'" Box said.

A study published in 2017 found that these types of warming events have been increasing in frequency and duration during winter as the Arctic continues to warm at more than twice the rate of the rest of the globe.

Although the theory is still the subject of ongoing research, this week’s weather is certainly proving that we’re never too far from the icy grip of the polar region.