Weather Photographer of the Year 2021: Setting the scene - Storm Chasing

Some of the most dramatic photos submitted to Weather Photographer of the Year are those of storms. Paul Knightley reveals the secrets of storm chasing and his near miss with a deadly tornado.

What is storm chasing? Put simply – it is the intentional pursuit of severe weather, usually a thunderstorm. People chase storms in many parts of the world, but the area most synonymous with the practice is the Great Plains of the United States.

Here, vast prairies, a good road network, and open skies mix with a meteorological potpourri of ingredients to create ideal conditions for storm chasing. The chasing ‘season’ is fairly well defined, usually centred on May. At this time of year, disturbances in the jet stream – the fast-moving ribbon of air several miles above the ground – interact with warm, moist air pushing north from the Gulf of Mexico and unstable, colder air from the mountains to the west. This unstable air has a steep lapse rate, which means the temperature decreases rapidly with height. This cocktail of air masses results in some of the most violent thunderstorms on the planet.

People chase storms for a variety of reasons. Some are researchers, looking to conduct science in the field by taking measurements of the atmosphere close to severe thunderstorms and tornadoes; some work for the media, either to help the warning process or to attract higher ratings; but the vast majority are hobbyist chasers, eager to witness the spectacular skies which accompany the thunderstorms.

I fall into this latter category. My job is related to meteorology, but my storm chasing trips are nothing to do with work per se. I have had a deep-seated fascination with thunderstorms since childhood. Seeing the storms of the Great Plains first-hand is truly awe-inspiring.

A typical day’s chasing will start with a look through the current observations and various model output data to home-in on a target location. Typically, there can be several target areas, and the key is to determine which is most likely to produce visually spectacular storms. Decisions may be modulated by the terrain or road network in a target area, and increasingly, how many other chasers might be in that region too. Once the target area is determined, the chaser will drive to that area and await further developments. A keen eye will be kept on how the atmosphere is behaving, and the target may be refined on route.

When a storm develops, the chaser will then attempt to remain ahead of the storm, to get the best view of it. Some chasers may drive deeper into the storm to observe large hail, but many will want to keep a clear view, as far as possible, of the area where air is rushing upwards into the thunderstorm – the ‘updraught’ base. It is in this area where a funnel cloud may develop. This rotating column of air extends from the base of the cloud towards the ground, becoming a tornado when it touches down over land, or a water spout over water. Tornadoes are the most violent of atmospheric storms, but the mechanisms of their formation are still subject to much study and debate.

The most violent tornadoes form from thunderstorms in which the upwards-moving air acquires rotation through a large depth of the thunderstorm. These storms are known as supercell thunderstorms, or just supercells. They are rare when compared with the total number of thunderstorms, but they produce a disproportionately large amount of severe weather, including large hail and high winds. They form when thunderstorms are acted upon by winds changing direction and speed through the depth of the atmosphere.

Supercells often exhibit a striking visual appearance, due to the strong dynamics within the storm. The images above and below both depict supercell thunderstorms. The smooth appearance of some of the lower clouds shows where air which is not buoyant is being ‘sucked’ into the storm by the powerful rotating updraught above. Part of this lifting is also due to colder air rushing out of the storm – the colder air having been created by precipitation falling from the storm.

For most storm chasers, the ultimate goal is to find and document a tornado. Tornadoes usually last a relatively short amount of time, typically measured in minutes, and are relatively small. Thus, finding one is hard! This challenge is what drives chasers to pursue storms for many hours and spend a lot of money in the process.

I saw my first tornado on the evening of May 12th, 2004, in southern Kansas. It was dark, but the frequent lightning lit up the tornado in brief bursts, as if the thunderstorm paparazzi was photographing a celebrity. This ghostly vision made the experience even more exciting. Since then, I’ve witnessed a number of tornadoes, alongside my partner, Helen. We’ve seen tornadoes of many shapes and sizes, but the most intense chase of our lives was on May 31st, 2013.

On this day, a very potent set of meteorological ingredients was in place across Oklahoma. It was hot and very humid, but a layer of warm air a little above the surface prevented thunderstorms from developing until the late afternoon. A huge amount of potential energy built up in the lower layers of the atmosphere. Towards early evening, a weather system in the higher atmosphere and some low-level lifting from a cold front helped release this energy, which was acted upon by changing wind velocities with height through the atmosphere. The result was the rapid development of intense supercell thunderstorms.

At just after 6pm local time, a tornado spun-up beneath the most active part of the thunderstorm, and rapidly grew in size and power. It went on to become the widest tornado ever recorded, at 2.6 miles in diameter. It also behaved quite erratically, which is not unusual for some tornadoes, especially large ones. It started by moving relatively slowly, but soon accelerated, as air rushing out of the storm helped guide its movement. For a time, the tornado was the one chasing us, which was a very scary experience. Thankfully, we found our way out of the path, but sadly several chasers were overtaken by the tornado and were, very tragically, killed.

This experience put the fact that tornadoes can be destructive and deadly into very sharp focus for me, but it did not change my viewpoint that the atmosphere can be incredibly beautiful, even when at its most savage. A few days later, we witnessed an amazing supercell thunderstorm in the Texas Panhandle, far from any large population areas. It is for moments such as these – hearing the thunder booming across the vast openness, with lightning searing from the obsidian skies, and the cloudscapes taking on beautifully-twisted façades, which draws me back to chasing again and again.

Entries for this year's Royal Meteorological Society's Weather Photographer of the Year in association with AccuWeather are open until 29 June. www.photocrowd.com/wpoty 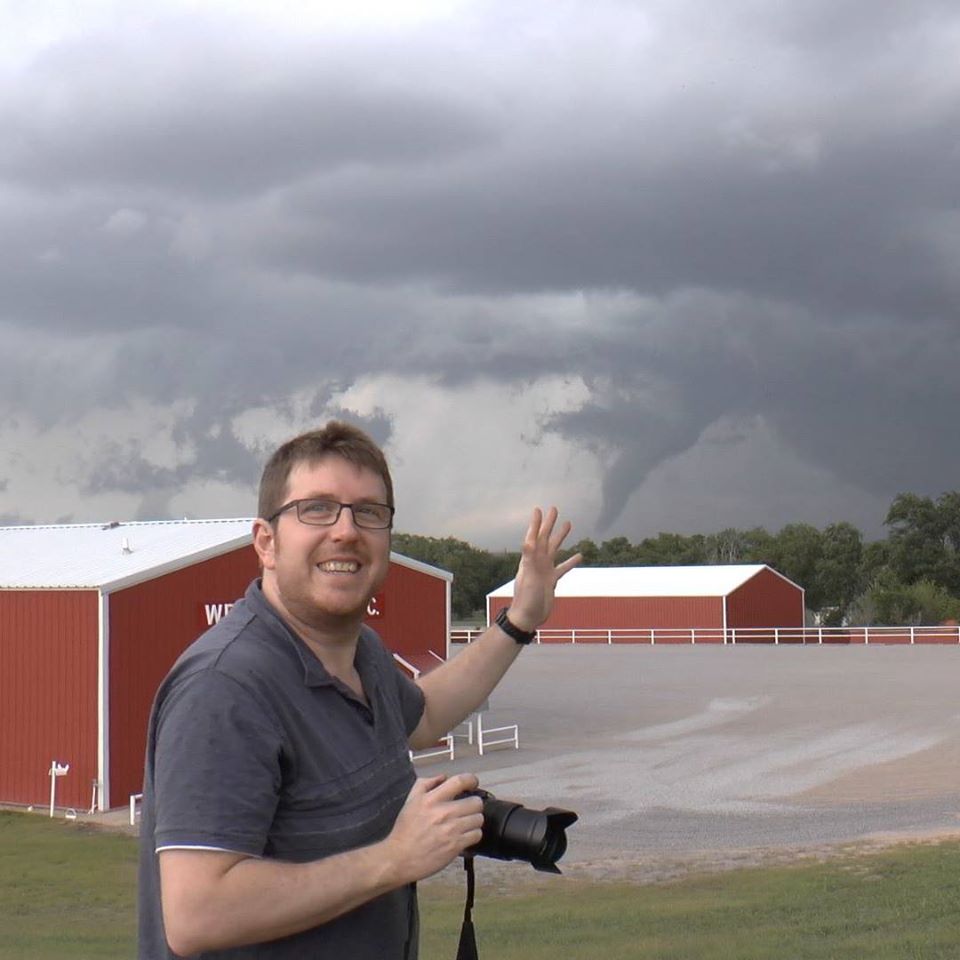 Paul Knightley is a Forecast Manager and meteorologist at DTN. He has worked for the company, formally MeteoGroup, since September 2000. Paul first went storm chasing in the USA in May and June 1998 and has been 19 times in all. Most of these trips have been alongside his partner, Helen.