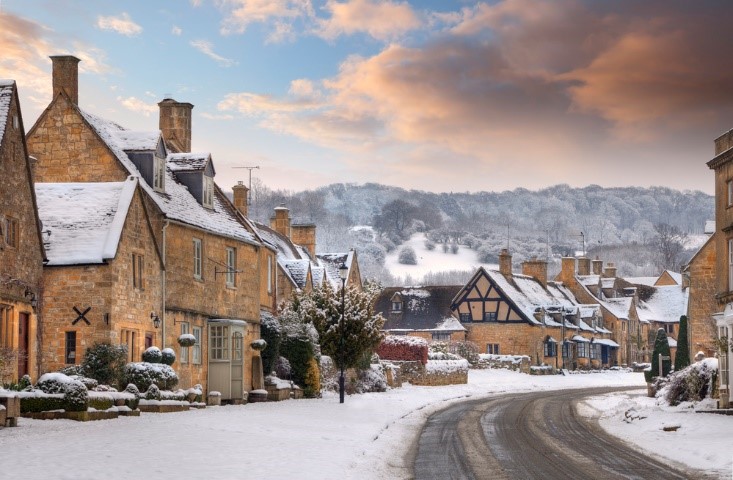 The shortest day may have passed (21 December), but the coldest months on average are still to come and can bring with them some potential risks. However, with knowledge comes power, so we hope that after you read this article, you’ll be fully equipped to face winter weather head on!

Whilst Christmas films can have us believing that cold weather is quite romantic, containing visions of cosying up in blankets in front of a fire with a mug of hot chocolate, the reality is that it can make us feel a bit miserable at times and have a real impact on our health. In addition, if there is wind blowing, the effective temperature you experience will be even lower than the measured value (wind chill).

Most rainfall in the UK will have started out high in the atmosphere as ice crystals which then melt as they fall into air below that has a temperature above 0˚C. However, when the surface air temperature drops below 4˚C, there is an increasing chance that they will reach the ground as snowflakes. These will then melt if that ground is above freezing point, but if not, snow will begin to accumulate.

Only travel if necessary and make sure to take care when out and about in snow. Alternatively, revert to traditional transport in these conditions and enjoy a bit of sledging!

This can produce some of the most challenging situations, because it often produces large areas of ice which can be hard to see.

Any hard surface left wet after a period of rain or subject to runoff from adjacent fields, may then turn icy as the temperature falls overnight.

When air containing sufficient water-vapour meets a surface or object with a temperature below freezing, ice crystals are deposited onto it as hoar frost.

In a similar way to freezing rain, rime forms when tiny super-cooled water droplets are blown by wind into contact with surfaces that are below 0˚C, where they freeze. In the United States, the more severe occurrences are known as ice storms.

Fog occurs when air is cooled, and water vapour condenses to form tiny suspended droplets. There are five different mechanisms of cooling. The most commonly seen inland at low levels is when the ground radiates heat to space overnight and cools the (almost still) air in close proximity to it. This produces radiation fog. Where there are valleys, the cooled air, being denser, will tend to sink, and valley fog may form. If moist air is forced to rise over high ground, it will cool and may form hill fog. The fourth type occurs where warm moist air is cooled as it blows over an already cold surface; advection fog. The rarest type around UK coasts is evaporation fog or Sea Smoke, which is formed when moist plumes of air rise by convection over a relatively warm sea surface to meet a very cold air flow just above.

So, now you know more about the main features of winter weather and the hazards it can bring, you can be fully prepared for the coming months and able to enjoy getting outside and experiencing the beauty that the cold temperatures also provide. We look forward to seeing your photos of it in our Weather Photographer of the Year competition later this year too!