Her Majesty The Queen

We join with the rest of the world in our sadness to hear of the passing of Her Majesty The Queen. The Queen was our Patron of the Royal Meteorological Society for almost 50 years until she was succeeded by His Royal Highness The Prince of Wales in 2002. On behalf of our membership, we offer our sincere condolences to the Royal Family at this difficult time.

We are incredibly proud to be a Royal Society for almost 140 years. It is an honour that Her Majesty The Queen served as our Patron for nearly 50 years from her succession, having taken on the role from her father, HM King George VI, until Patronage passed to His Royal Highness The Prince of Wales in 2002.

On Friday 14 July 1978, at 12 noon, Her Majesty The Queen, as Patron of the Society, declared open an exhibition of the Royal Meteorological Society, unveiled a plaque to commemorate the opening of the former Head Office of the Society at James Glaisher House in Bracknell, and 'honoured the President (Prof J. T. Houghton) with her presence at luncheon in the Fellows' Room'.

In an article in our Weather journal, it was reported that 'a dense throng listened to the opening speeches'. It was also noted this was 'the first time in our history that the Sovereign has visited the Society. It is particularly gratifying that the major contributions being made by British meteorologists, climatologists, and oceanographers should be recognised in this way.'

In formally opening the Exhibition, Her Majesty commented:

"We are said as a nation to talk about the weather more than any other subject. This is hardly surprising since we probably have the most varied and uncertain weather in the world, and it affects the lives of us all. For farmers - or for cricketers - their livelihood is at stake. For holidaymakers and weekenders, anticipation is mixed with doubt. For many of us, every day, there is the problem of what clothes to wear.

"In many countries earthquakes, hurricanes and typhoons bring major disasters and the world needs all the help the scientists can give… British scientists are among the foremost meteorologists in the world and play a leading part in international enterprises…This will not only bring important advances in our understanding of the behaviour of the atmosphere but will also improve relations between countries. By its very nature the study of weather crosses national barriers and co-operation between scientists of all nations is probably greater in meteorology than in any other field."

After lunch, Her Majesty was presented with a gift from the Society - an autographic rain-gauge - that would be installed at Balmoral to complement the already existing climatological station.

Finally, the article noted the weather: "quite uncharacteristically in this rather dismal summer, it was a gorgeous day".

Photographs by courtesy of Corinne Cockrell 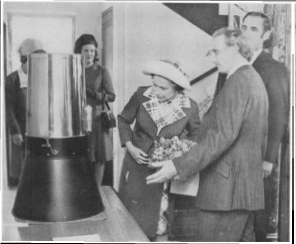 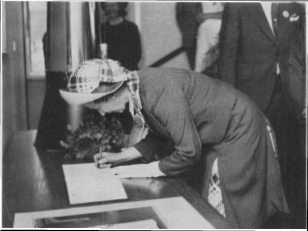