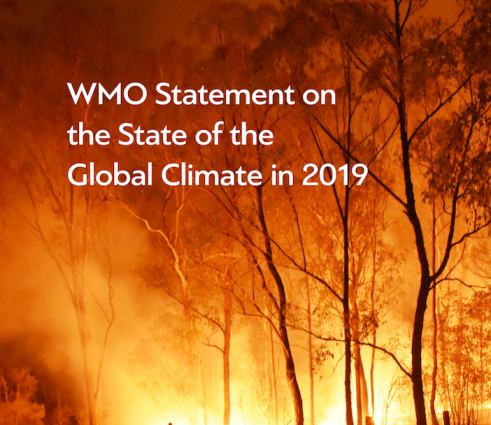 World Meteorological Organization Statement on the State of the Climate 2019

The World Meteorological Organization (WMO) Statement on the State of the Climate in 2019, released on 10 March, confirmed that 2019 was the second warmest year in the instrumental record, second only to 2016 when a very strong El Niño event also contributed to increased global mean temperatures.

This key UN multi-agency statement is based on contributions from national meteorological and hydrological services, leading international experts, scientific institutions and United Nations agencies. This is the twenty-sixth WMO Statement on the State of the Global Climate and the 2019 edition marks sustained international efforts dedicated to measuring, analysing and understanding the year to year variations and long-term trends of our changing climate.

The report will be used to inform governments, international agencies, other WMO partners and the general public about the global climate, significant weather and climate trends, and events at the global and regional levels.

The report confirms that since the 1980s, each successive decade has been warmer than any preceding decade since 1850.

United Nations Secretary-General Antonio Guterres states in his foreword: “This report outlines the latest science and illustrates the urgency for far-reaching climate action. It brings together data from across the fields of climate science and lists the potential future impacts of climate change – from health and economic consequences to decreased food security and increased displacement.”

WMO Secretary-General Taalas, adds: “Given that greenhouse gas levels continue to increase, the warming will continue. A recent decadal forecast indicates that a new annual global temperature record is likely in the next five years. It is a matter of time.”