Title: Hailstorms in the Alpine region: Diurnal cycle, 4D-characteristics, and the nowcasting potential of lightning properties 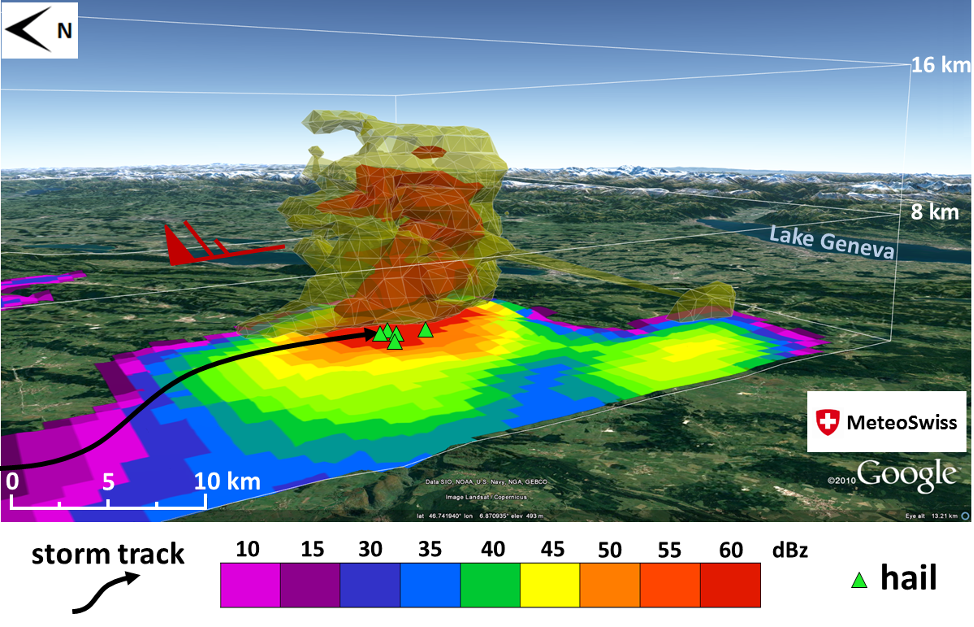 Hail, a low probability high impact weather event, has been a subject of scientific interest for many decades because of the severe damage it causes to agriculture, buildings and cars. Due to its strong local-scale variability (in time and in space) and the chaotic nature of thunderstorms, forecasting hailstorms still poses a major challenge to weather services. In order to expand knowledge about these types of storms, observations from the past must be analysed, but this is challenging due to the lack of historical observations and databases that are either incomplete or limited to a few case studies.

Thanks to dedicated algorithms, hailstorm information can be extracted from weather radar data. A unique database (2002 – 2017) containing more than 100,000 ordinary thunderstorms and more than 30,000 hailstorms has been created for Switzerland and neighboring regions. Some characteristics of hailstorms, such as the diurnal cycle and their vertical structure, have been studied. Furthermore, lightning data from a ground-based network are evaluated with respect to their hailstorm prediction skill.

Results show that during daytime storms mainly initiate over the foothills (Prealps) and move towards areas with higher terrain elevations. Whereas, during night-time, the storms preferably move from the foothills to the plains. Not all of the years that show a hail frequency higher than normal show a typical diurnal cycle (with hail maximum occurrence during the late afternoon). In some years, the hailstorm frequency is almost uniformly distributed through the 24 hours of the day. This demonstrates that in these years the mountain-valley wind circulation is not the main triggering mechanism for developing storms in the Alps.

The study also demonstrates that there is an evident difference in the storm vertical structure when comparing ordinary thunderstorms and hailstorms. Furthermore, for hailstorms, the vertical structure in cold and warm air masses can differ a lot. This finding may be useful for forecasters to diagnose the severity of hailstorms, especially during the cold season.

Finally, the study shows it is challenging to forecast hailstorms at useful lead times by means of lightning information only. A rapid increase in lightning activity, referred to in the literature as a “lightning-jump”, is a promising precursor. However, not all the studied thunderstorms showed a sudden increase in the number of lightning strikes prior to producing hail.