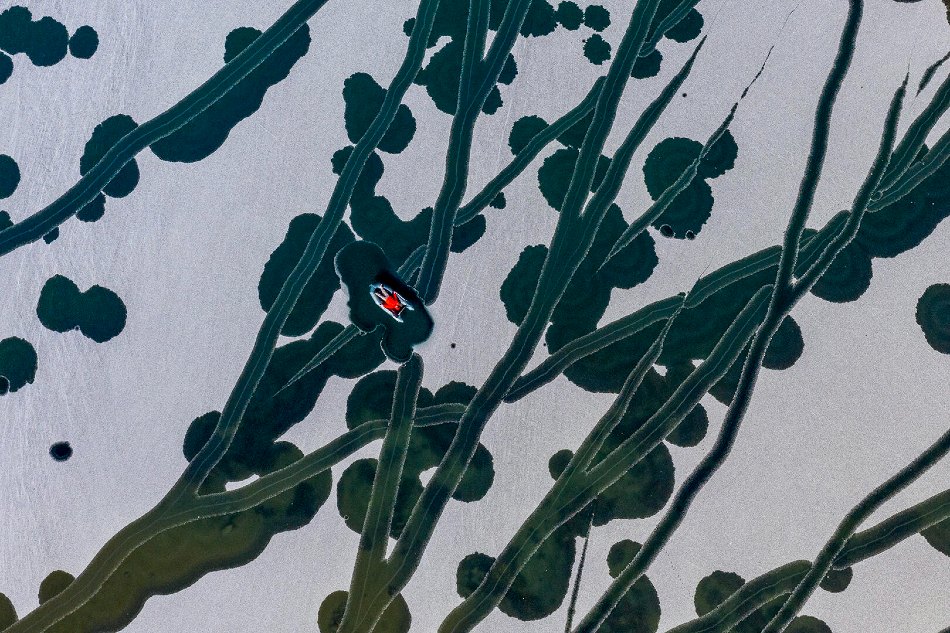 1st runner-up - Self Portrait in a Boat © Evgeny Borisov

Photo title: Self Portrait in a Boat

Photo caption: Evgeny took this self-portrait using a Quadcopter at Lake Kok-Kol in Russia. To Evgeny, the uniqueness of the photo lies in his experience of the weather behind the lens – it changed so significantly in the time he was there that he felt the seasons shifted not only between days but over just a few hours.

To capture this shot, he waited for the first snow to fall, which then covered the ice on the lake like a white blanket, leaving areas of open water as vivid streaks in the white.

Have you ever questioned why lakes freeze from the top down? It is because the maximum density of water occurs at 4°C. Above this temperature, as the surface water cools, it becomes denser and sinks, being replaced by warmer water from below. This process continues until the whole area is around 4°C. Further cooling of the surface water will then form a lighter (less dense) layer of colder water at the top, so the circulation stops. As a result, cooling becomes more concentrated in the upper layers creating ice as the surface reaches 0°C.

In just a couple of hours after taking this photo, Evgeny said the whole lake was covered with white snow and winter came into its own.