The Beaufort Scale is an empirical measure that relates wind speed to observed conditions at sea or on land. Its full name is the Beaufort wind force scale.

Below is a table showing the Beaufort Scale with speeds in knots, miles per hour and kilometres per hour. Please note that these are mean speeds, usually averaged over 10 minutes by convention, and do not capture the speed of wind gusts.

The wind speeds shown in the table, and that you hear quoted in weather or news reports, are always measured at 10 metres above the ground, using meteorological instruments.

They do not reflect the wind speeds that you would feel on the ground - at 2 metres, wind speed may be only 50-70% of these figures.

The specifications are descriptions of likely observations on land or at sea and the probable and maximum wave heights (in metres) are quoted for the open sea. The figure for sea state (on a scale from 0-9) is a shorthand way of describing the sea surface conditions to various users. 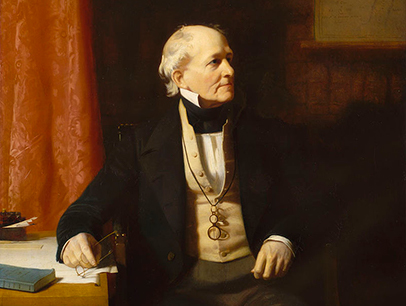 The scale was devised in 1805 by the Irish hydrographer Francis Beaufort (later Rear Admiral Sir Francis Beaufort), a Royal Navy officer while serving on HMS Woolwich. The scale that carries Beaufort's name had a long and complex evolution from the previous work of others (including Daniel Defoe the century before) to when Beaufort was Hydrographer of the Navy in the 1830s when it was adopted officially and first used during the voyage of HMS Beagle under Captain Robert FitzRoy, later to set up the first Meteorological Office (Met Office) in Britain giving regular weather forecasts.[1]

In the early 19th century, naval officers made regular weather observations, but there was no standard scale and so they could be very subjective – one man's "stiff breeze" might be another's "soft breeze". Beaufort succeeded in standardising the scale.