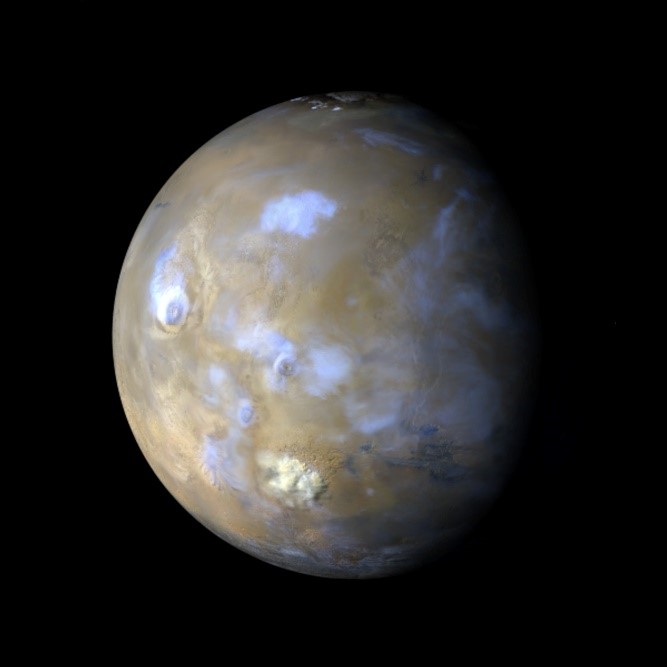 Mars, one of our nearest neighbours, is a fascinating, alien world. With NASA hoping for human missions to Mars in the 2030s, what kind of weather could visiting Earthlings expect?

While the dry, rocky surface, large-scale topography and relatively thin atmosphere of Mars appears to be in stark contrast to our green and watery Earth, there are actually many similarities between the planets.

A solar day on Earth takes 24 hours; on Mars, it’s just slightly longer at 24 hours and 37 minutes. Our planet rotates at a tilt; Mars has a similar axial tilt or obliquity. So both planets experience seasons over the year, which lasts nearly twice as long on Mars – 669 Mars days (or 687 Earth days).

In fact, out of all the planets in our Solar System, Mars has the most Earth-like meteorology, with a global atmospheric circulation pattern reminiscent of Earth’s own tropical Hadley cells. Like Earth, there are cirrus-like clouds of ice, orographic clouds that form over hills and mountains, and westerly jets that form at higher latitudes in both hemispheres.

Figure 1, below, shows some of these features, as well as a dust storm. Mars experiences many dust storms each year, a few of which evolve into global dust storms so large they engulf much of the planet.

One key difference between Earth and Mars is water, especially in a liquid form. Ancient scars on the surface, dating back around 4 billion years, show remnant evidence of a warmer, wetter world with flowing rivers and precipitation, in marked contrast to the present-day extreme desert.

Surface pressure on Mars varies between 2–12 mb, about one-thousandth that of Earth’s. Temperatures can vary from 20 °C at the equator down to -140 °C at the winter pole. Combine the low surface pressure with sub-zero conditions (the average temperature on Mars is -60 °C), and it’s no surprise that liquid water is generally unstable. In other words, water transitions directly between ice and vapour. The main constituent of the Martian atmosphere, carbon dioxide, condenses to ice at the winter poles as temperatures drop below -130 °C.

The atmospheric composition of Mars is somewhat similar to that of a primitive Earth, prior to modifications by an abundance of liquid water and life processes. Carbon dioxide (95 %), nitrogen (2.6 %) and argon (2 %) make up the vast majority of the Martian atmosphere with trace amounts of multiple other chemicals, including oxygen, water vapour and ozone. There are layers of ozone on Mars, but ozone is not sufficiently abundant to prevent harmful UV radiation penetrating to the surface in potentially lethal doses.

The global circulation on Mars is not unlike that of the Earth’s stratosphere. In spring and autumn, there are circulation cells in each hemisphere. These move from near the equator to sit across the hemispheres as the seasons change. A single cell then dominates with air rising in the summer hemisphere and falling in the winter hemisphere. Figure 2, below, illustrates the circulation pattern during different seasons with red shading corresponding to clockwise motion and blue shading corresponding to anti-clockwise motion as viewed. The Hadley circulation on Mars reaches much higher altitudes and a broader range of latitudes; a single large cell can span 90 degrees of latitude close to solstice.

Much of the weather on Mars is like a desert on Earth, with a repeating pattern of warmer days and very cold nights. Away from the equator, especially in the winter hemisphere, Mars also has high- and low-pressure weather systems, very similar in size to the cyclones and anticyclones we experience. The winter pole itself is surrounded by a powerful vortex (see Figure 3 below), with a winter jet stream that steers these weather systems around the planet, moving from west to east.

(a) northern (LS= 265-275°) and (b) southern winter (LS= 85-95°) during Mars Year 30 in the OpenMARS database. Latitude circles are present every 10° and arrows indicate the wind speed and direction. Potential vorticity helps us understand the movement of air in a rotating atmosphere. ‘Blue’ air circles around the pole, showing the regions where the vortex winds are strongest.

There are three key atmospheric cycles on Mars. Firstly, there is the carbon dioxide cycle. During winter, the temperatures in the polar regions of Mars are cold enough for the CO2 in the atmosphere to condense into ice, either directly onto the surface or to fall as snow. The CO2 then sublimates off the ice cap in the spring and summer, returning to the atmosphere. This cycling of CO2 into and out of ice on the surface changes the atmospheric mass by up to a third over the course of a year.

The second key cycle is the Martian water cycle. This is characterised by the annual pole-to-pole transport of water between the reservoirs in the northern and southern polar ice caps. An equatorial cloud belt forms in the northern spring and summer as water vapour freezes above about 30 km. Mars has a more elliptical orbit than Earth. It is further from the Sun at these times of the year and hence cooler on average.

Water vapour reaches higher altitudes in the northern autumn and winter when Mars is closer to the Sun. This results in a warmer middle atmosphere, with stronger winds associated with stronger thermal gradients at the surface. This, in turn, results in increased atmospheric dust content that further amplifies solar heating of the atmosphere above the surface.

A seasonal ‘pump’ of water is also evident in high southern latitudes when Mars is closer to the Sun. Water vapour sublimates from ice in the southern polar cap and is transported back to the northern hemisphere by the cross-hemispheric Hadley cell. The water ice clouds formed on Mars also have a radiative impact on the atmosphere, with warming of around 15° C at and above the cloud level (approximately 20 to 30 km) in mid-latitudes during the northern summer and winter. On a local scale, orographically-driven clouds have been observed to form in multiple locations, including on the leeward side of the 20 km-high Arsia Mons volcano.

While the CO2 and water cycles largely repeat from year-to-year, the third key cycle, that of dust, displays much larger interannual variations. Regional-scale dust storms (Figure 1) that occur predominantly every autumn and winter in the northern hemisphere have the potential to form planet-encircling dust storms (roughly every 3 to 4 Mars years), with the precise mechanisms involved remaining elusive.

The increased dust content in the atmosphere leads to a strong radiative impact and hence influences the transport of aerosols and other chemical gases. In the case of water vapour, this increases the escape of water via the upper atmosphere during intense dust storms.

On a more local scale, dust devils driven by solar heating of the ground, primarily in summer, are a prominent feature on the Martian surface. On average, they are around three times broader than similar convective vortices found on Earth, sometimes reaching over 12 km in height, owing primarily to the much deeper Martian planetary boundary layer (that part of the atmosphere that directly feels the effects of the planet’s surface).

Knowledge of Mars’s atmosphere originally came from telescopic records as far back as the 1700s but has greatly blossomed in the age of computer models and spacecraft exploration. The development of Martian global circulation models has a history almost as long as that of Earth global models, and the similarities described above mean that many of the fundamental modelling techniques share close parallels.

Following early missions in the late 1960s and 70s, there have been increasing numbers of orbiting spacecraft in the last two decades, culminating in recent missions such as the ExoMars Trace Gas Orbiter (European Space Agency and Roscosmos), the Perseverance Rover (NASA), the Hope Orbiter (UAE) and the Tianwen-1 Orbiter and Zhurong Rover (China).

As in Earth meteorology and climatology, there are studies to synthesise information from different missions and models. One example of such a reanalysis is the OpenMARS (Open access to Mars Assimilated Remote Soundings) database, a global record of Martian weather from 1999 to 2015 that combines a computer model with temperature profiles, dust column retrievals and intermittent water vapour and ozone column retrievals from three instruments, each on a separate orbiter.

True Mars operational weather forecasting is not yet feasible, although trial attempts have been made using older data. Short-term forecasting is of increasing interest with Mars Sample Return and the prospect of crewed missions, but this still requires far more detailed observations and resources for rapid data handling and processing to become operational reality.

New observations from future missions and improvements in the modelling of the global atmosphere are planned to better understand the hazards faced by human visitors to the active dynamic climate system of Mars. 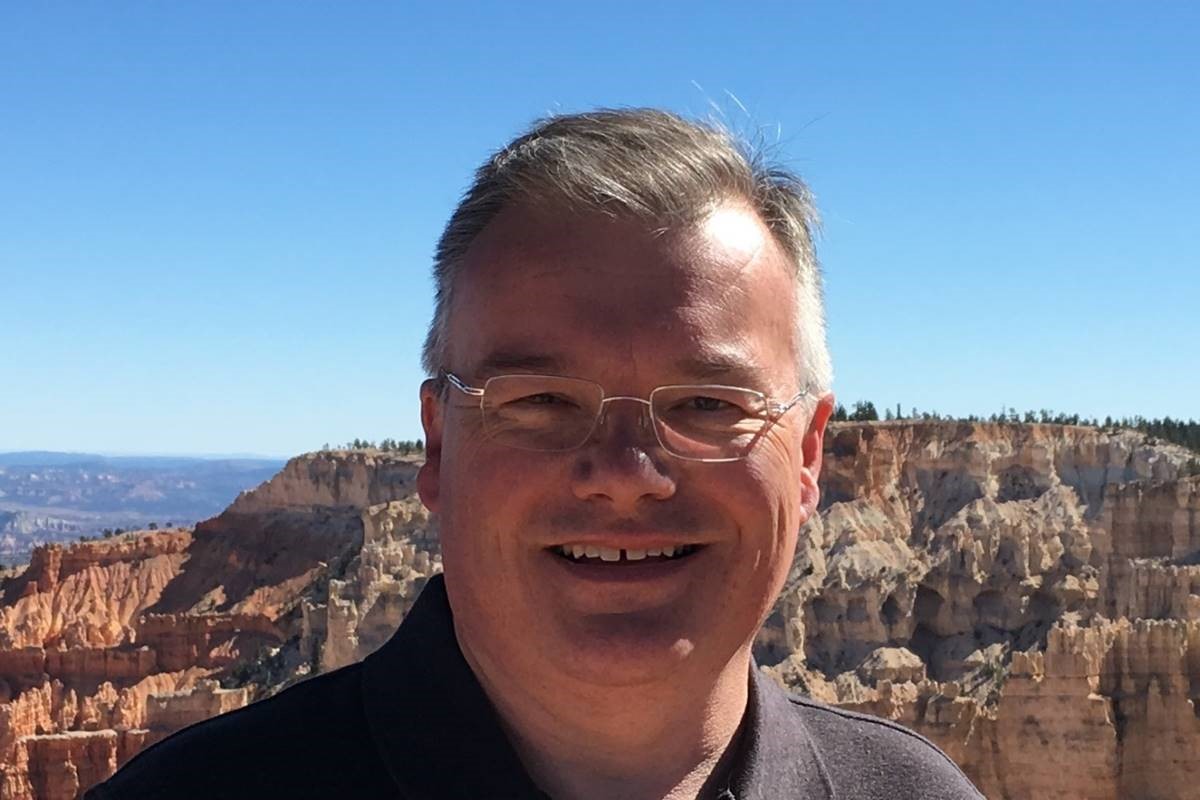 Stephen Lewis is Head of the School of Physical Sciences and Professor of Atmospheric Physics at The Open University.

His research interests include the dynamics of planetary atmospheres and climate, and using computer modelling to interpret spacecraft observations. Subjects include Mars, Venus, the Giant Planets, Exoplanets and the climates of both Mars and Earth in the distant past. Results from Stephen’s work have been used by both ESA and NASA in conducting spacecraft missions, in particular making forecasts for Mars entry, descent and landing. Recently, Stephen acted as OU academic consultant for The Planets (BBC2, 2019) and A Perfect Planet (BBC1, 2021). 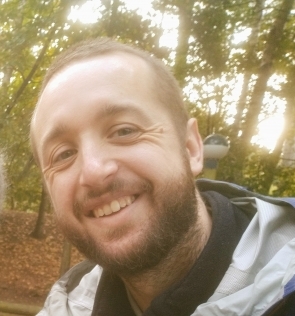 He primarily investigates atmospheric chemistry cycles on Mars using a combination of observations and computer modelling. James’ research is helping to investigate links between the atmospheric chemistry cycles and the main drivers of atmospheric processes, such as the dust and water cycles, by combining computer models with the latest observations from the ExoMars Trace Gas Orbiter mission alongside multiple other spacecraft missions.