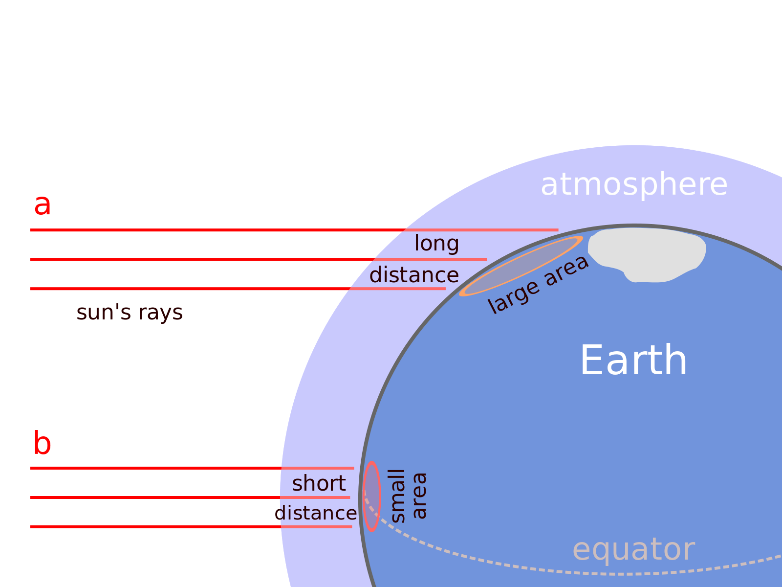 What causes our weather? Why is it much warmer at the Equator than it is at the Poles? What are the trade winds?

As weather enthusiasts, these might be a few questions you find yourself asking. The Earth’s rotation and the Sun are the main causes of the diverse weather experienced in different parts of the world every day. A previous article published on theWeather Club explores the processes involved in creating atmospheric circulation cells and the impact they have on global weather patterns.

The sun’s energy does not fall evenly onto our spherical planet: some parts of the earth (b on image 1) are pointing directly at the sun, therefore the sun’s energy has less distance to travel to reach the surface and is focused over a small surface area; whereas other parts (a on image 1) point away from the sun, therefore the same amount of sunlight has further to travel (which allows more solar energy to be deflected back into space by particles in the atmosphere) and is spread over a larger region. The amount of solar energy an area gets over a period of time is known as insolation. As a result, the Equator and the Tropics are much warmer as they receive more insolation, with temperature decreasing towards the Poles as insolation decreases.

This difference in solar input generates major global patterns of atmospheric circulation: air that is strongly heated at the equator has the greatest tendency to rise. If we were on a planet which didn’t rotate, this would result in one large circulation ‘cell’ – one in which warm air would rise at the equator, move to the colder polar regions, sink and flow back to replace the air at the equator (image 2a). 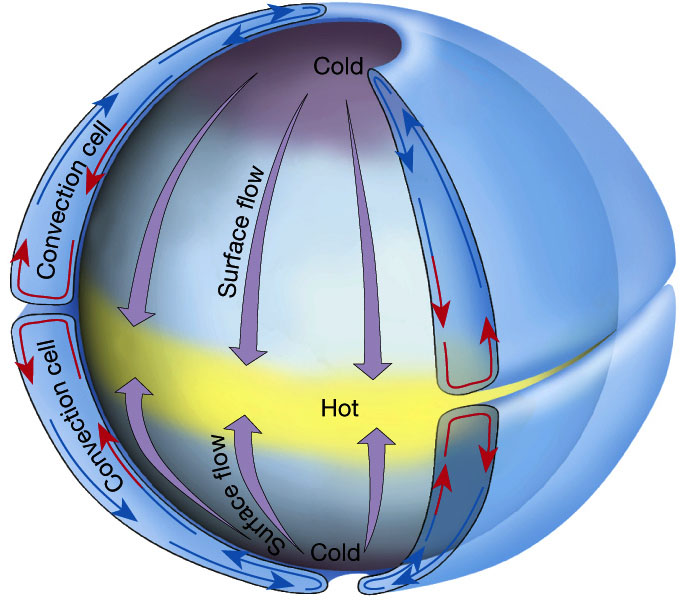 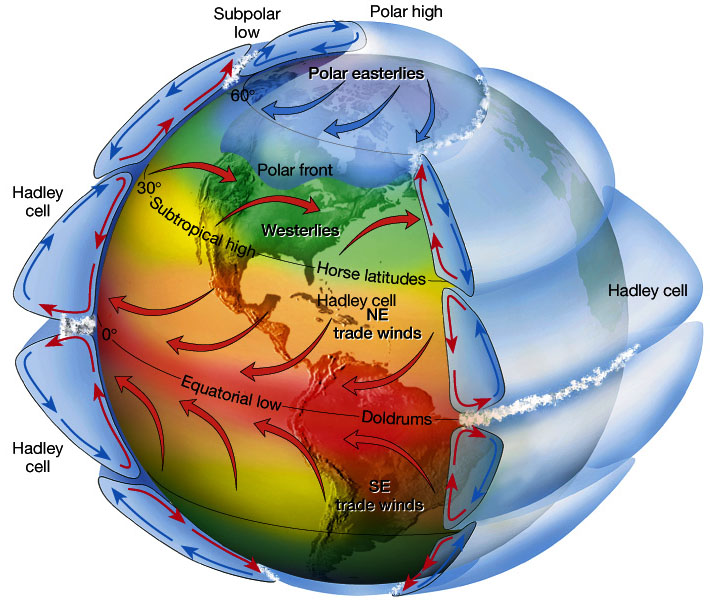 However, since our planet does rotate. If you imagine standing on the equator, over the course of a day you cover a large distance (about 24,874 miles), whereas if you were standing at the poles, you wouldn’t move any distance, but simply rotate on the spot. You don’t ‘feel’ the speed you are moving as the air is moving at the same rate. Therefore, air at the equator moves much faster than air at the poles, so as it rises and moves towards the poles, it is moving faster than the underlying ground. So it seems as though the air overtakes the ground and moves from west to east; in contrast, as air is pulled from the poles towards the tropics, it is moving more slowly than the underlying earth, so it looks like it is moving east to west. In short, nothing in the atmosphere moves in a straight line: everything in the northern hemisphere is deflected to the right. This is known as the Coriolis Effect.

The Hadley Cell: This is driven by warm air rising. This Coriolis Effect causes the air that has risen at the equator and moving to the poles to deflect and become increasingly westerly high up in the atmosphere that the circulation breaks down and the air sinks back towards the ground in the sub tropics (30° – the ‘horse latitudes’). Once the air has descended back to the ground, it returns to the equator and is deflected to the east – they are known as the easterly trade winds.

Polar Cell: The same thing happens in the polar regions, but it is driven by cold air sinking; the sinking, cold air at the poles moves back towards the equator, but because it is slow moving it becomes increasingly easterly as the underlying earth moves faster, and the circulation eventually breaks down at around 70° latitude. The air then rises again and returns to the poles, resulting in another atmospheric cell.

Ferrel Cell: This lies in between the Polar and Hadley cell, and is a little more complicated. Put simply, it is the net effect of air motions from all the storms or ‘depressions’ that occur in the mid-latitudes. Air sinks in the sub tropics and rises around 60-70°. In this region, westerly surface winds occur. This drives most of the weather systems we experience here in the UK, with weather moving off the Atlantic (see Box 1 below).

These drive air flow, atmospheric pressure (weight of the air pressing down on the earth) and rainfall. The rising and sinking of air causes high and low pressure at the surface, respectively: A low pressure belt is found around the equator – known as the Inter-Tropical Convergence Zone (ITCZ)*, where the northern and southern trade winds meet. In the images in this article, this is positioned precisely at the equator. However, since the earth tilts on its axis, the Earth is only overhead at the equator twice a year, at the equinox. Throughout the rest of the year, the precise location of the ITCZ changes: it moves north to the Tropic of Cancer (20° N) during the UK summer and south to the Tropic of Capricorn (20° S) in the UK winter (see Box 2 below).

Two more low pressure regions are found at around 60° north and south of the equator, known as subpolar lows, which lie between the polar cell and the Ferrel cell, where air ascends. As air rises, pressure falls and the air cools. As cooler air can hold less moisture, condensation occurs. Therefore in these regions clouds form and precipitation is likely to develop.

Conversely, where air sinks, pressure increases and areas of high pressure develop resulting in clear skies, with no cloud formation and therefore less rainfall. Subtropical high pressure is found at 30° north and south of the equator, as air sinks between the Hadley and Ferrel cell. Once this dry air reaches the surface it starts to pick up moisture from the surface, resulting in bands of deserts at 30° and dry regions at the north and south poles.

The interactive effect of the three circulation cells (Hadley, Ferrel and Polar), combined with the influence of the Coriolis effect results in the global circulation. The net effect is to transfer energy from the tropics towards the poles in a gigantic conveyor belt.

*When crossing the equator, sailors in the 1700s would get boats stuck for weeks due to lack of wind in the ITCZ, so the expression ‘feeling down in the doldrums’ (meaning a person is depressed or lacking energy) is believed to be derived from this.

Here is an accompanying lesson produced for the Society's educational website, www.MetLink.org - it also contains some ideas for experiments and demonstrations to help explain some of the concepts covered: