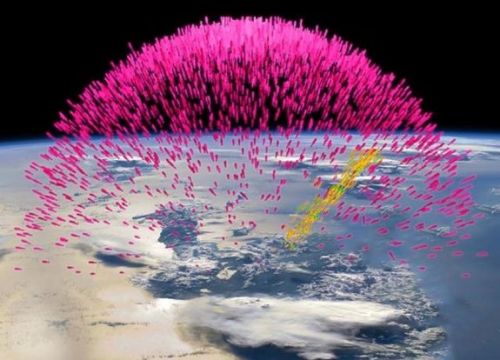 This 'dark opponent' discharges from storm clouds and flings antimatter into space. Astrophysicists and meteorologists are now trying to understand what they have termed ‘dark lightning’.

Lightning occurs due to charge separation in a cloud. When negatively charged electrons build up at the base of a thundercloud, anything it passes over becomes   positively charged. If the cloud passes over a tall object, like a tall building or tree, these electrons jump, creating the ‘pitchfork’ of light you see streaking across the sky.

However, researchers have discovered that under the right conditions, the process of creating regular lightning can also produce x-rays and even gamma rays that are ejected into the atmosphere. The radiation in these invisible blasts can carry a million times as much energy as the radiation in visible lightning, but that energy dissipates quickly in all directions rather than remaining in a lightning bolt.

This is what scientists are calling dark lightning and it is invisible to the human eye.  Unlike regular lightning, though, people struck by dark lightning - most likely in an aeroplane - would not get hurt. However they may receive in an instant the maximum safe lifetime dose of ionising radiation – the kind that wreaks havoc on the human body.

However, as there is approximately only one dark lightning occurrence for every thousand visible flashes and since pilots do their utmost to avoid thunderstorms, the risk of injury is quite limited. It remains unclear as to whether anyone has ever been hit by dark lightning.

More research is needed before we have a full understanding of this natural phenomenon.

A NASA video about dark lightning can be viewed here: www.youtube.com/watch?v=OBOolkHVG_Q