During the winter months, the highest temperatures in the UK occur in places like north Wales and even northeast Scotland. The record UK maximum temperatures in November, December and January were all set in these regions. What does that tell us?

Days are short and the sun is low so local sunshine cannot be a major factor as it would be in summer. The records were also set on the days with strong winds from south or southwest. The air is coming over a warm sea so it will be quite mild everywhere but what is producing these extremes?

The explanation is a process called the Föhn (or Foehn) effect. The word Föhn comes from the German and means ‘hairdryer’. I suspect that Föhn was adopted as the word for hairdryer because it is a strong wind that is both warm and dry. The actual Föhn wind blows in the Alps, but Föhn type winds blow in many parts of the world and have many different local names but the processes are basically the same.

As dry air rises, it cools at a set rate of about 3 degrees Celsius per thousand feet, so rising from sea level to 2000 feet results in a 6 degree fall in temperature. Any volume of air contains some water vapour but whilst it remains a gas it has little effect. However, any volume of air can only ‘hold’ a certain amount of water vapour without it condensing into a liquid. This amount decreases with temperature. Therefore, as the air rises and cools there will come a point when there is ‘too much’ water vapour and condensation will start and cloud forms. This change from vapour to liquid releases energy.

All substances release energy when condensation occurs but amongst its myriad peculiar properties the transition of water vapour to liquid water releases an unusually large amount of energy. I can’t quite get my head around this, but my calculator tells me that condensing 1 kg of water vapour into liquid releases enough energy to heat 3 kg of iron from 0C to its melting point!

Luckily, the atmosphere is very big and can absorb this but there is enough of an effect to slow the fall in temperature. From the point condensation begins, liquid water can be easily removed from the air as rain or drizzle, or just deposited on vegetation or ground surface. When we reach the top of high ground, the air is cooler but also drier than when it started to rise.

On the other side of the hill, the stable air sinks. All the processes we have look at so far are reversible. As it sinks it warms and the moisture evaporates absorbing energy and slowing the rate of warming. However, there is now less water to evaporate, and the sinking air starts warming at 3C per thousand feet at a higher level. This means that passage over the hill leaves the air warmer and drier than it was when it started to rise.

In the Alps, the Föhn effect is more than a meteorological anomaly. It is very important to the economy. A strong Föhn can cause snow conditions to rapidly change affecting the ski industry. Snow melts in the warm air and then refreezes as solid ice, producing conditions which can cause considerable damage to both skis and skiers. It can even create conditions in which avalanches are more likely to occur.

The ‘Föhn effect’ in action

November 13 2022, was comfortably the warmest Remembrance Sunday on record.

The UK was in an airflow that originated from the area around the Azores Islands in the Atlantic. It was very mild and moist with brisk winds from the south or south-east. This was forced to rise over high ground and then sink back once the hills were cleared giving rise to a Föhn effect in many locations. 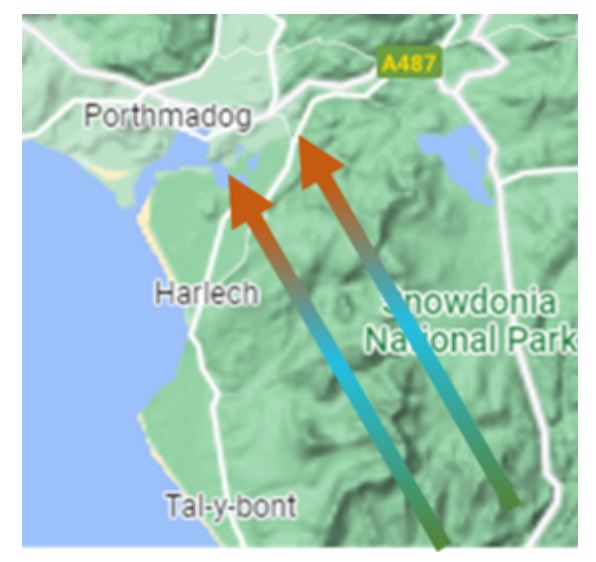 A UK record temperature of 21.2C was recorded at Porthmadog, Gwynedd (see map). English and Scottish records were also set with 19.2C recorded at Bridgefoot, Cumbria, and 17.2C at Aviemore.