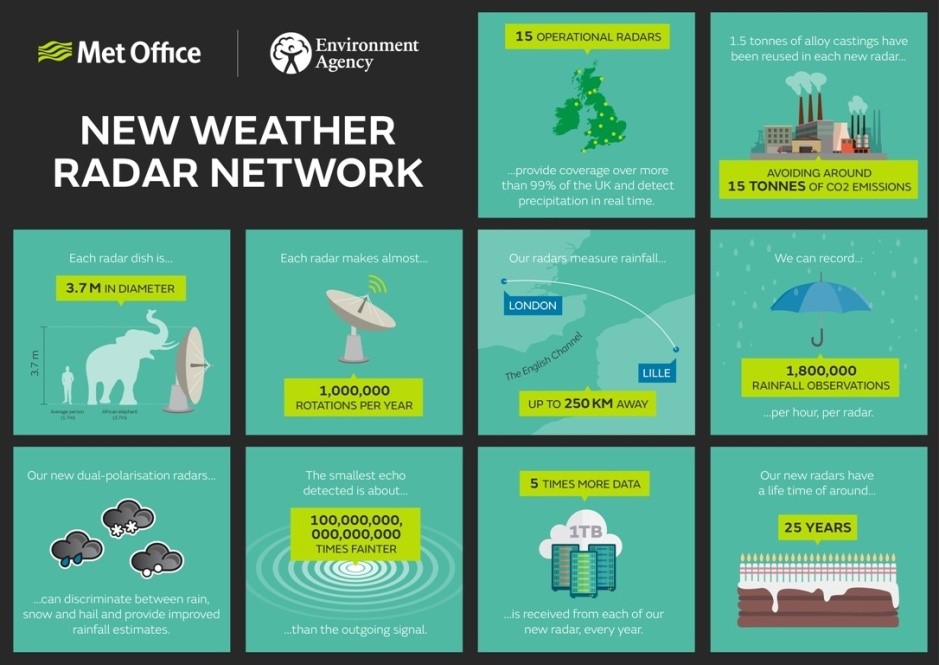 The Met Office have completed a £10 million pound state-of-the-art upgrade of the UK’s rainfall radar network.  For the first time the size and shape of raindrops and snowflakes can be captured, as well as wind speed data. These new scientific advancements have not only improved radar coverage but will lead to improvements in the accuracy of rainfall estimates, particularly during high impact weather events, such as flooding.

The Head of the Met Office Public Weather Service Derrick Ryall said; “Weather radar provides the only means of measuring the spatial extent and distribution of rainfall over a wide geographical area. The most intense rainfall events are often highly localised and can therefore be missed or under-sampled by rain gauge networks, and whilst their occurrence can be forecast with skill, it is often not currently possible to forecast their exact location. Radar therefore provides a crucial input to short-range weather forecasts (nowcasts) of precipitation rate, and improves the skill of weather forecasts when it is assimilated into numerical weather prediction models.”

The Met Office radar network is one of the longest established radar networks of its kind in the world and consists of 15 radars across the UK - the oldest is at Hameldon Hill, near Burnley in Manchester and has been operating since 1974. The new radar network delivers five times more data - 1.8 million rainfall observations per hour per radar, with almost a terabyte being received from each radar over the course of a year.