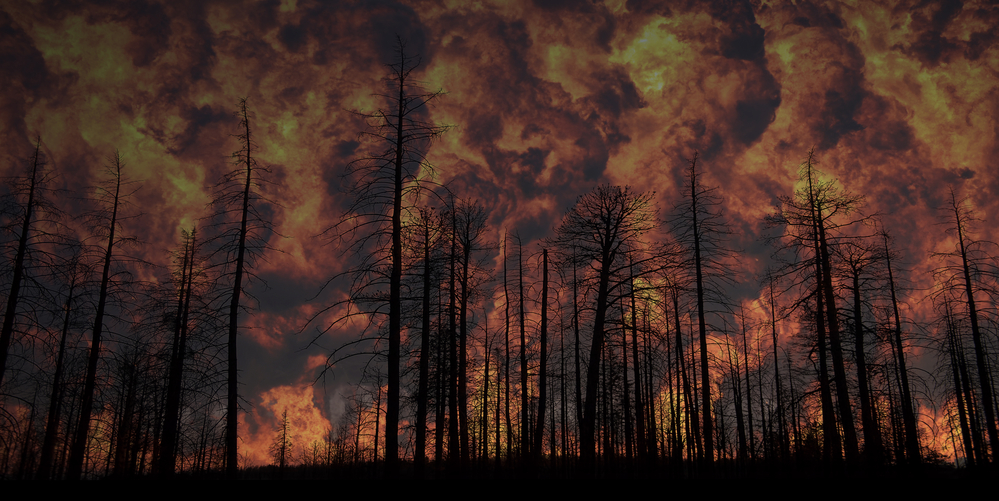 Pyrocumulonimbus clouds are thunder clouds created by intense heat from the Earth’s surface. They are formed similarly to cumulonimbus clouds, but the intense heat that results in the vigorous updraft comes from fire, either large wildfires or volcanic eruptions. So it is, for this reason, the prefix ‘pyro’ is used – meaning fire in Greek.

Pyrocumulonimbus clouds were reported during the Australian bushfires in late 2019/early 2020, and a number have more recently been observed in Siberia with the Arctic heatwave. These intense wildfires reach temperatures above 800°C and can essentially create their own weather systems.

The hot smoke released from these fires acts as a plume of heat into the atmosphere. Hot and very buoyant, the air in the plume rapidly rises. As it rises, it cools and expands. Once cooled sufficiently, water vapour condenses on the ash to form a grey or brown cloud above the plume. At this stage, the cloud is called a pyrocumulus. Still, if enough water vapour is available and the updraft intensifies, it can develop into a pyrocumulonimbus cloud. Then, similar to other thunderstorms, there may be a downburst of intense localised rain. This rain can create a downdraft of cooler air, which can then carry embers from the fire, igniting spot fires away from the source. In some cases, dry lightning from these storms can strike without rain, further spreading the wildfire. They have also been known to dangerously generate fire tornadoes.

Pyrocumulonimbus clouds are thought to be responsible for several aerosol pollutants (such as smoke and ash) trapped in the stratosphere and upper atmosphere. However, a paper by the American Meteorological Society, ‘The Untold Story of Pyrocumulonimbus’, re-evaluated the data from previous stratosphere studies to conclude that volcanic eruptions had been wrongly attributed to these pollutants. Dr Glenn K. Yue, one of the paper’s authors, stated in an article by NASA that one of the reasons for this misinterpretation was that it was initially thought the only force strong enough to penetrate the tropopause in a short period was a volcanic eruption.

As our climate changes, these unusual but significant storms could occur more frequently due to hotter and drier conditions increasing the risk of wildfires.