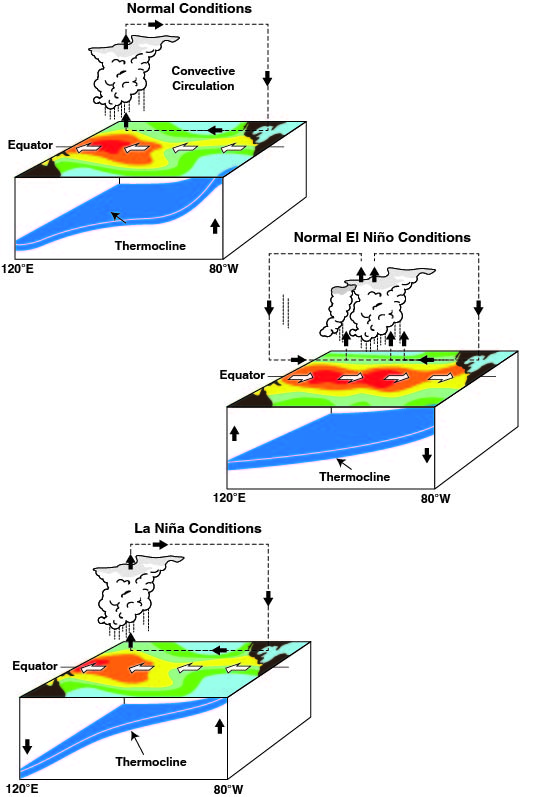 What is El Niño?

The El Niño Southern Oscillation (ENSO) is a large-scale climatic phenomenon that originates in the tropical Pacific but affects global climate patterns. The warm phase is known as El Niño, and the cold phase is La Niña. El Niño occurs irregularly every two to seven years and peaks in winter.

The term El Niño, Spanish for ‘child’ or ‘the Christ child’, was first used by fishermen along the coasts of Ecuador and Peru to refer to a warm ocean current that typically appears around Christmastime and lasts for several months.

What causes an El Niño event?

In a normal year, when ENSO is inactive, the equatorial Pacific trade winds blow from east to west. The winds push the warmer water towards the west, and colder water rises up from deeper in the ocean to replace it. This creates an east-west difference in sea surface temperature and hence an east-west difference in sea level pressure that maintains the trade winds and so drives a positive feedback loop.

Such changes in sea surface temperatures affect the atmosphere over vast areas, with local and global repercussions. Locally, the associated atmospheric circulation changes drive increased atmospheric convection and precipitation over the central and eastern Pacific, while rainfall is reduced over the western Pacific. In addition, these changes have remote impacts throughout the tropics and at higher latitudes via the atmosphere, especially when ENSO is at its strongest in winter.

How do we measure El Niño?

A network of ocean buoys measures water temperature, currents and the wind. Satellites also provide surface temperature and current data, providing the ability to monitor ENSO in real-time. We can also predict El Niño months in advance as we can measure the heat content of the upper ocean, one of the precursors for the onset of El Niño and use our climate models to predict its evolution. Although various criteria exist, we usually say an El Niño event is underway when sea surface temperatures in the equatorial Pacific (officially called Niño region 3.4) rise 0.5°C above the historical average for at least three months in a row.

The most substantial impacts are experienced by those countries near the tropical Pacific origin of ENSO. Changes in surface temperatures, winds and moisture affect rainfall intensity and patterns, leading to extreme events such as flooding and drought. During an El Niño event, Peru, Ecuador and the south-eastern parts of South America receive heavy rainfall. In northern Brazil, drier conditions or even drought results. Indonesia, South Asia and parts of Australia are also more likely to experience drought during El Niño. The change in weather patterns associated with El Niño can significantly impact the economy, particularly agriculture, water resources, fisheries and public health. ENSO also strongly influences the occurrence and intensity of tropical cyclones, and Atlantic hurricane activity weakens during El Niño but strengthens during La Niña. In the UK, we experience the socio-economic impacts of an El Niño event, partly through increased food prices. There are effects on the jet stream and European weather, especially in late winter when El Niño increases the chances of cold snaps. La Niña increases the chances of wet and stormy conditions.

El Niño releases heat into the atmosphere and increases subsequent global temperatures. For example, global average temperatures for 2016 were around 1.1°C above preindustrial values and the strong El Niño episode of 2015/2016 partly contributed. However, researchers have concluded that the warming from El Niño is only accountable for about 0.2°C of this overall figure.

Because of the large event-to-event variations of El Niño, we don’t have enough past years of observations to show a clear impact of climate change on its properties. However, there is now some evidence that the effects of El Niño on rainfall may increase in the future and that we may even see more extreme ENSO events, but these remain active research questions.