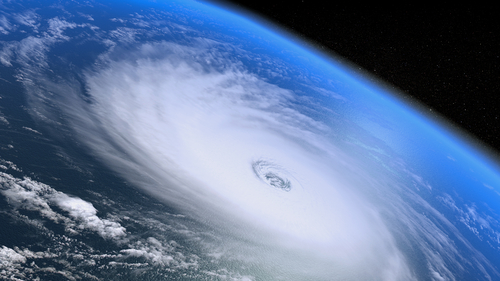 Satellites have been used for decades to monitor changes of the Earth’s surface. This includes the impacts of extreme weather events such as wildfires, severe storms or droughts. By using satellites, we can reach the most remote regions of the Earth which would otherwise not be monitored. This previous article introduces the concepts of remote sensing and how images are being processed.

Looking at changes in an area is called “change detection” and is one of the most fundamental methods in remote sensing. Following images acquired by the Visible Infrared Imaging Radiometer Suite (VIIRS) on the Suomi NPP satellite show parts of Europe in July 2017 and in the following year 2018. It is clearly visible how the vegetated, green areas in 2017 appear in brown colours in 2018. The recent heatwave led to continued high temperatures and little precipitation and induced stress on the plants.

Caption: Europe from above in 2017 (left) and 2018 (right) acquired by the Visible Infrared Imaging Radiometer Suite (VIIRS) on the Suomi NPP satellite. (Source: NASA)

Heavy monsoon rains led to the worst flooding in Kerala, India since 1924. The first image acquired in February 2018 shows the region prior to the flood. The later image in August 2018 shows the severe impacts of the flood. Both false colour composites display water as dark blue and vegetation as bright green. Note that clouds are visible in the second image.

Caption: Kerala, India in 2018 before the flooding (left) and after the flooding (right). The February image was acquired by the Operational Land Imager on Landsat 8, the August image by the Multispectral Instrument on ESA’s Sentinel-2. (Source: NASA)

Change detection has also proven useful when assessing the impact of Hurricane Maria on a forest near Arecibo in Puerto Rico. According to NASA, forests on the northern side of the island are underlain by limestone hills with little soil. Because of that, trees in this region were not strong enough to withstand Hurricane Maria that uprooted 60 % of the trees there. The image shows the severe impact the storm had: After losing the canopy cover, the forest road was revealed.

Caption: Section of forest near Arecibo, Puerto Rico before (left) and after Hurricane Maria (right). The images were acquired by the airborne airborne G-LiHT (Goddard’s Lidar, Hyperspectral and Thermal Imager) team.