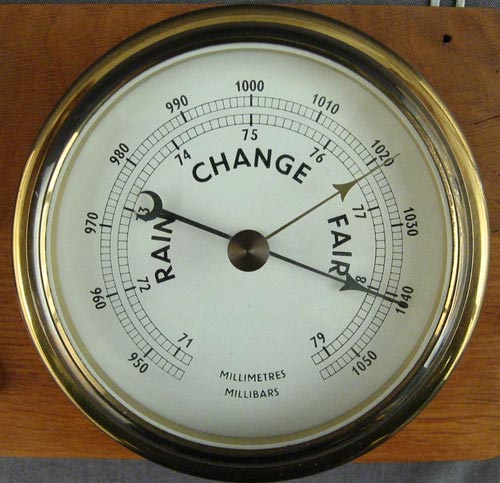 Feeling Under Pressure?: What are barometers?

We tend to think that the air around us doesn’t weigh anything, but in fact a cubic metre of air weighs over a kilogram. This air presses down on the Earth’s surface exerting a force we call air pressure. And if you add all those cubic metres of air sitting above our heads, it roughly equates to the force of an elephant balancing on a desk! This is equivalent to 1000 hectopascals (hPa), which is the unit used by meteorologists.

Air pressure varies over time and from place to place. It also gets less the higher up we go, simply because there will be less air pressing down on us. Pressure is usually around 1000hPa, and at sea level it rarely gets lower than 950hPa or higher than 1050 hPa. High pressure gives fine, dry weather – warm in summer (remember how glorious July was!) but with cold nights in winter. Low pressure, on the other hand, brings cloud, rain and strong winds.

The first barometers used a J-shaped glass tube with mercury in; a higher air pressure pushes the mercury column higher up the long tube, so its height shows us the air pressure. These types of barometers can still be seen in stately homes, but they are very unwieldy and since 2007 it is only possible to purchase a mercury barometer as an antique due to an EU ban on producing new ones.

These have been replaced by aneroid barometers that contain small metallic bellows with a partial vacuum inside. As the air pressure changes, the bellows expand and contract, and this moves levers that drive a pointer across a scale to indicate pressure. Many barometers are labelled in inches and also millibars (mb), the latter is the same as hPa. More recently, electronic pressure sensors are to be found inside wireless weather stations.

Barometers need to be adjusted every once in a while to read the correct pressure by using the little screw at the back. To do this, go to www.metoffice.gov.uk/weather/uk/observations/ and look at the pressure at the weather station nearest you. This is best done on a calm day because the pressure will be similar over large areas and does not vary much over time.

Your barometer will then be set to pressure corrected to sea level, that is, what it would read if you could magically bring it down to sea level under your house. This has to be done because pressure decreases with height – at a rate of about 12hPa for every 100m. So comparing pressures at different locations would tell us more about their relative heights than about the weather. The black lines on a weather map are known as isobars; they join together places with the same air pressure.