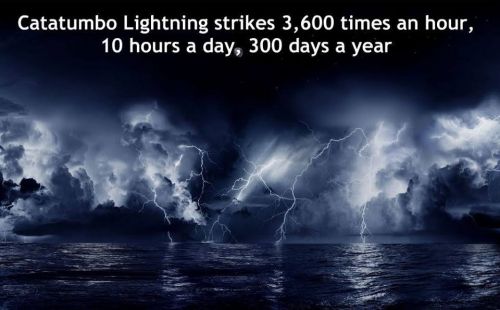 The Catatumbo lightning, although not rare or unusual, is a  remarkable feature in that it persists in the same place night after night. Indeed, the reliability of the storms means that they have historically been used as a maritime navigational aid.

Scientists think the Catatumbo occurs far more than elsewhere due to local topography and wind patterns. Lake Maracaibo basin is surrounded by mountains that trap warm trade winds coming off the Caribbean. These winds meet cool air moving down from the Andes, forcing the air upwards until it condenses into thunderclouds. As a result, the thunder generated by the Catatumbo lightning is rarely audible since it occurs at great distances from the observer.

It was recently awarded the record for the highest concentration of lightning in the world by Guinness World Records. A video of the lightning can be viewed here: www.youtube.com/watch?v=yyWkLsdJjPI.

Lightning can strike the ground, the air, or inside clouds, but there are roughly 5 to 10 times more cloud flashes than cloud-to-ground flashes. Discover the different types of lightning in this MetMatters post.