We all know that weather forecasting isn’t an exact science, whether we’re talking about tomorrow, next week or next month. Even so, we can usually say with confidence whether it will rain or perhaps snow in the next day or so. But it is impossible to do the same for a specific day in three or four weeks’ time. That’s not what long-range forecasting is about.

So why bother? It’s important to understand and predict how the weather may evolve and develop through the longer term. From contingency planners to businesses and organisations, guidance and information on broader weather patterns are crucial. For example, retailers need to ensure they have the right stock on the shelves should a heatwave be on the cards.

As well as complex weather models, long-range forecasting is often guided by teleconnections and drivers of how broader weather patterns may evolve. A keyword that is often associated with long-range forecasting is ‘anomalies’. These drivers of long-range weather patterns may bring above or below average temperatures and rainfall, for example. And it’s these predicted departures from normal conditions for a given month or season that are known as anomalies.

While there is significant computer power available these days to produce long-range forecast models and data, it is equally important, if not more so, to have forecaster intervention when looking at weeks and months ahead. Computer weather models and data become less reliable the further ahead one looks, so while raw computer weather charts and data may well do a good job at saying it will rain across certain areas of the British Isles in four days’ time, computers struggle with the long lead times of weeks and months ahead.

When it comes to the long term, it is the guidance of a seasonal forecaster and meteorologist that is very important. The primary reason for this is that the atmosphere can behave in quite a predictable way when looking at broader weather patterns across the globe. One key driver of the northern hemisphere’s weather patterns in winter is the polar vortex.

This rapidly spinning area of low pressure that develops through the winter months as the polar region cools can provide guidance on whether the UK will see a stormy spell in the coming weeks or whether potentially drier, colder weather could develop too. The polar vortex also links into what are known as ‘teleconnections’ – recurring and persistent, large-scale patterns of pressure and circulation anomalies that span vast geographical areas. Many of the teleconnection patterns are also planetary scale in nature and span entire ocean basins and continents. For example, some patterns span the entire North Pacific basin, while others extend from eastern North America to central Europe, and all can be interlinked as well. Teleconnections work in a similar way to flicking a rope, sending a wave, peak or trough along the rope and eventually reaching the other end.

One of the key teleconnections for the North Atlantic and the British Isles is the NAO (North Atlantic Oscillation), and this can also be directly linked to the polar vortex through the winter months. If the polar vortex is well organised and strong, then a positive NAO pattern dominates. This usually results in a long-range forecast that is dominated by spells of wet and windy, even stormy, weather from off the Atlantic.

However, if there is evidence that the polar vortex may be disturbed or weaker and with the NAO perhaps trending negative, then this would increase the risk of colder, potentially drier winter weather.

This broader setup is highlighted in the below images, highlighting the overall weather patterns that can result from changes to the NAO (North Atlantic Oscillation). 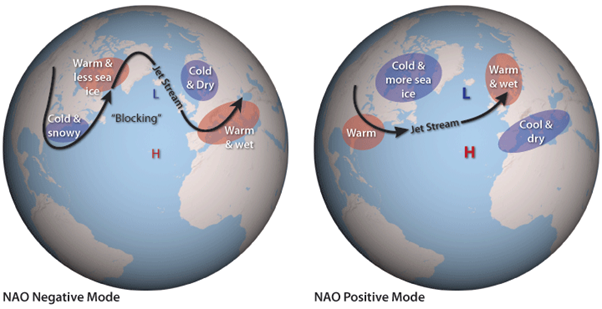 The relevance and importance of long-range forecasting is not just restricted to providing guidance as to whether it will be wetter, warmer, cooler or drier in the weeks ahead but can have significant importance to agriculture and also finance as well. The Atlantic hurricane season, which runs from June to November each year, is often analysed weeks in advance by many meteorologists. There are a number of teleconnections that can help to provide guidance on whether it may be an above or below-average hurricane season.

The importance of ENSO (El Niño Southern Oscillation) is another key global driver of the weather that is also important to the Atlantic hurricane season. The primary reason being that El Niño, across the Pacific, usually means a lower than average number of hurricanes, but a La Niña event in the Pacific can help to bring about an above-average Atlantic hurricane season, driven by how ENSO alters wind flow patterns across the tropical Atlantic.

The importance of long-range forecasting is extensive. While it can be fraught with uncertainties due to the time frame involved, meteorologists that study teleconnections and drivers of the weather can gain a clear picture of how the broader weather patterns may evolve in the coming weeks. These analyses are then vital to more medium-term forecasts too.

So, the next time you come across a long-range forecast showing potentially hot and dry weather for the British Isles in summer, or perhaps a long-term prediction for a cold, snowy spell in winter, then you’ll know that there’s a lot of science and analysis behind these predictions. They aren’t simply a ‘shot in the dark’ as some may think when it comes to long-range weather predictions. 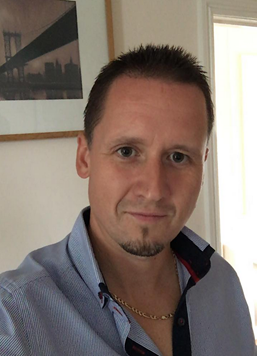 Matt Hugo, FRMetS, RMet, has over 15 years of professional forecasting experience and currently works for MetraWeather.