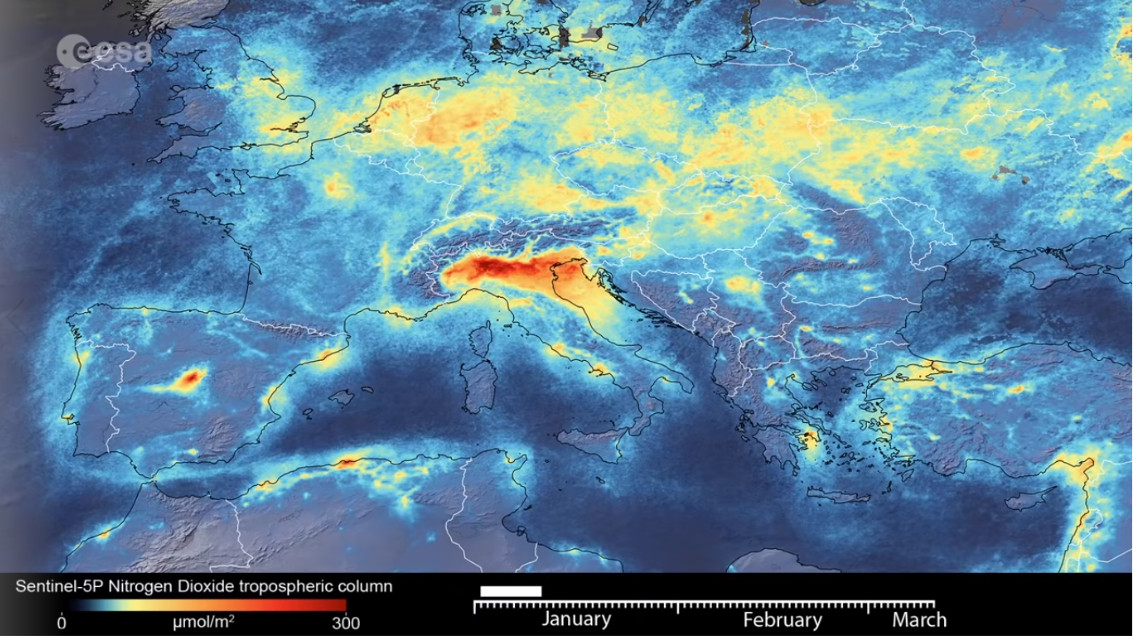 Observed reductions in NO2 emissions: a silver-lining from COVID-19

Over the past week, the European Space Agency released data that provides a welcome positive in amidst the challenge of COVID-19. Data from the Copernicus Sentinel-5P satellite has shown a reduction in nitrogen dioxide (NO2) over both Italy and China, as each country has brought in stringent measures to tackle the pandemic.

Why is NO2 of interest? Well, it is a pollutant formed through the combustion of fossil fuels for power generation, mainly in vehicles, power stations or domestic boilers. High levels of NO2 are thought to irritate the inner lining of our lungs and so can aggravate pre-existing respiratory illnesses, such as asthma. NO2 can also react with water, oxygen and other chemicals in the air to form ozone, particulate matter and acid rain.

The Copernicus Sentinel-5P satellite was launched in October 2017 as part of Copernicus’ mission to monitor the Earth’s atmosphere. Every day, global measurements of various trace gases (including NO2) are taken using a state-of-the-art Tropomi instrument. As will become evident in the animations below, the Tropomi has such a high resolution that it is able to detect air pollution over cities.
Data released from Sentinel-5P over a week ago showed fluctuations in the amount of NO2 over Europe between 1 January 2020 and 11 March 2020, using a 10-day moving average. The most obvious reduction towards the end of the period occurs over Northern Italy, the country’s industrial powerhouse - the initial dark red hues indicating high concentrations of NO2 turn yellow by late period, signalling lower concentrations. This ties in with various towns in the region being put under lockdown from late February to avoid the spread of COVID-19, which was then extended nationwide from March 10.

Further data published last week also shows changes in the tropospheric concentration of NO2 using a 10-day moving average, but this time over China from 20 December 2019 to 16 March 2020. Emissions of NO2 are seen to fall from late January as parts of the country went into lockdown, before then increasing again since early March as some lockdown measures have started to relax. However, it is worth noting Chinese New Year will have also played a role in January’s fall as well as the weather.

Changes have also very recently been observed closer to home. Last week, 165 air quality sites monitored by the Department of the Environment, Food and Rural Affairs (DEFRA) found concentrations of NO2 across the UK on Monday to be lower than on Sunday. This reflects changing commuting habits and the fact that more people are working from home, in line with the government’s plan to tackle COVID-19. Indeed, according to DEFRA’s latest forecast, air pollution over the UK is expected to remain largely Low over the next week, with only isolated pockets of Moderate to High on Thursday.

Most notably, these temporary reductions in NO2 emissions serve as a stark reminder of the impact we humans have on the planet. However, they also show us what is possible with behavioural changes and the environmental impact of reduced industrial activity, road, rail and air travel. Obviously, no country will adopt all the drastic measures introduced under the threat of COVID-19 long-term, but if lessons learned could be carried forward, we would undoubtably see a multitude of planetary benefits beyond a reduction in air pollution.