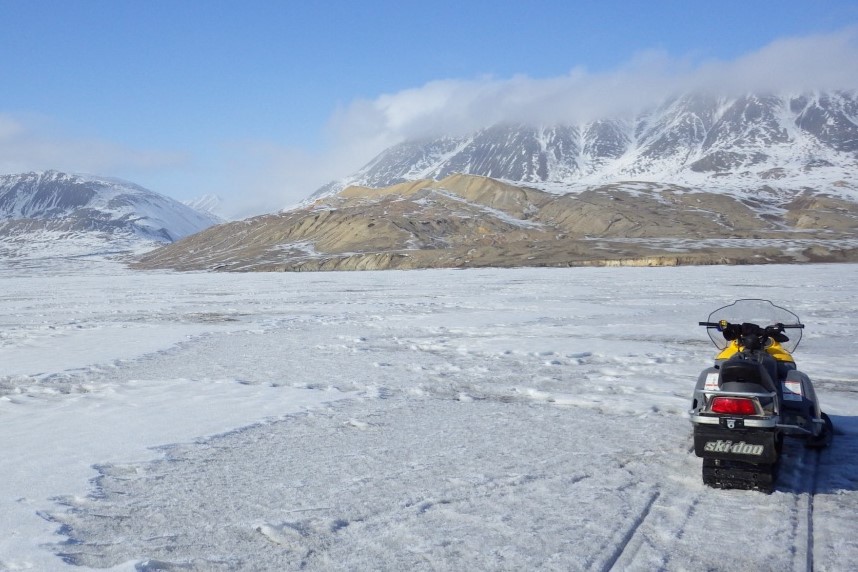 The Arctic is experiencing rapid warming – nearly twice as fast as the rest of the globe. This phenomenon is known as Arctic amplification, describing that the global warming is amplified in the Arctic. The changing Arctic landscape includes changes in sea ice conditions, thawing of permafrost and river flow and it affects the lifestyle of the people that live there. According to the Arctic Human Development Report, about 4 million people live in the Arctic, 10 % of them indigenous. Trails are essential for indigenous people to reach settlements, cultural sites and for practising the traditional lifestyle (hunting, fishing and gathering activities). There is a lack of understanding how those are and might be affected by climate change today and in the future.

A team of scientists led by Professor James Ford from the University of Leeds looked at the access of Arctic communities to trails on ice, land and water of the Inuit Nunangat, the Inuit homeland in northern Canada. The study was recently published in the journal Nature Climate.

The researchers conducted interviews with more than 200 participants from nine Inuit communities in the Canadian Arctic. The interviews documented (1) climate-related conditions that are necessary to safely use trails, (2) which trails have been used in the past and today, when they have been used and what type of transport was used (e.g. boat, vehicles, snow mobiles), and (3) how travel risks are perceived and dealt with. These results were linked to data on weather and sea ice conditions.

One of the main finding is that, in the past three decades (1985 to 2016), the overall trail access across the communities has been minimally affected despite the significant climatic changes (warming above 2°C). Actually, access to trails on land and water in the spring and summer has been improved over this period, while access to ice trails has decreased. The changing sea ice conditions make the use of snowmobiles in the autumn and winter more difficult.

The study offers an important new perspective by taking account skill level and risk perception of the trail users: At the moment, the Inuit community seems to be able to mitigate the impacts of climate change on travel conditions. However, Professor Ford mentions:

“The shrinking sea-ice and shifts in seasonal temperatures are a serious threat, particularly to the region’s native species and ecology which form an essential part of the Inuit community’s tradition and culture. And while the effects of climate change to date on trail access were not totally what we expected, communities are very concerned about what future change may mean.”