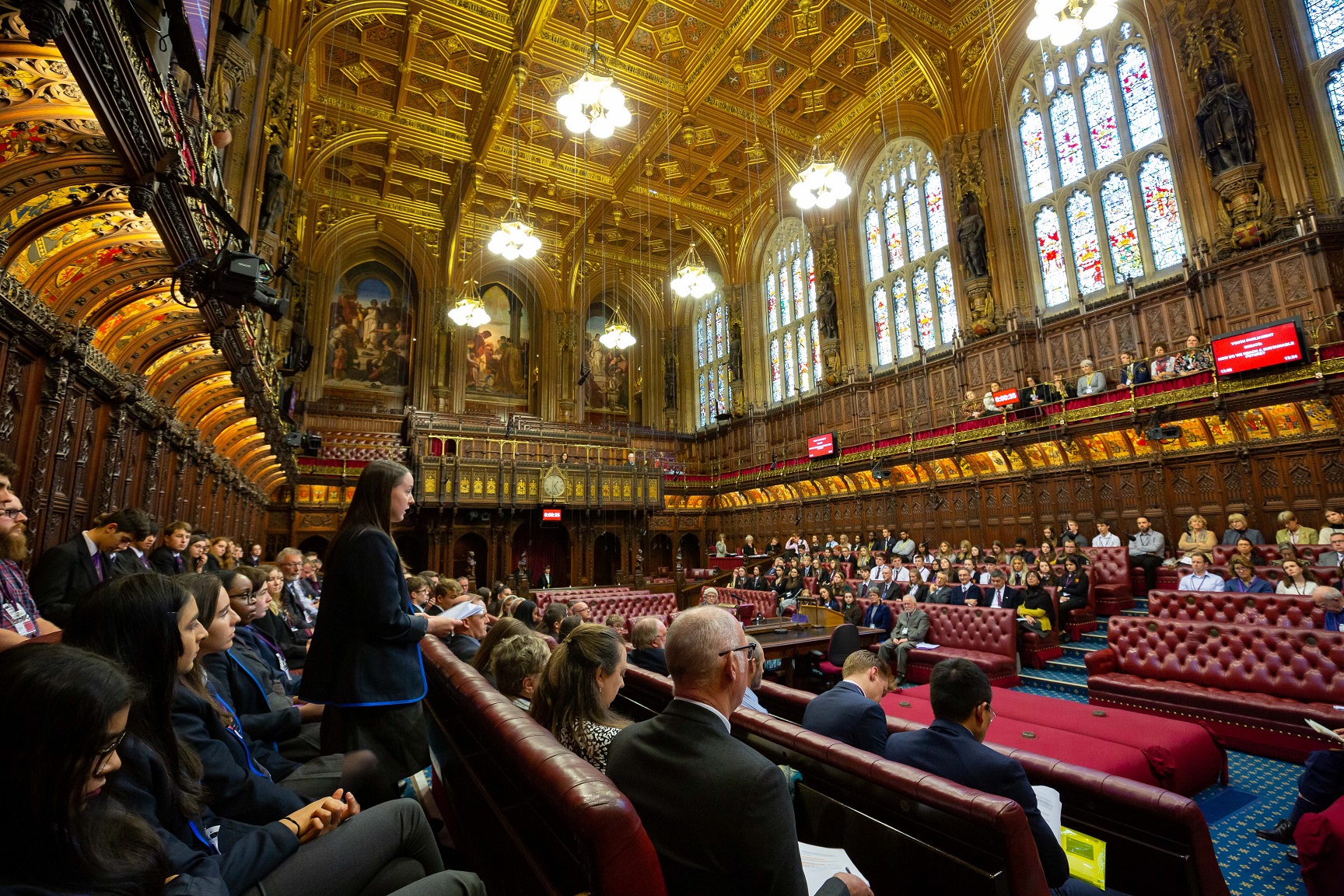 House of Lords Chamber Event: How Can we Reach a Sustainable Future

How Can we Reach a Sustainable Future

Since 2007, the House of Lords has opened up the chamber once a year, inviting people from across the UK to take part in a debating event in collaboration with the English Speaking Union.

These are essentially a set of short debates on topical issues, organised by the House of Lords as an outreach activity similarly to “real” debates and carried out in the Chamber. This year, the invitation to participate was extended to members of the Royal Meteorological Society and the Royal Geographical Society along with students from ten schools representing a diverse range of schools across the full geographical area of the UK. This was an incredible opportunity to take part in a public discussion of the chosen topic: ‘How can we reach a sustainable future?’ in the magnificent and historic Lords’ Chamber. 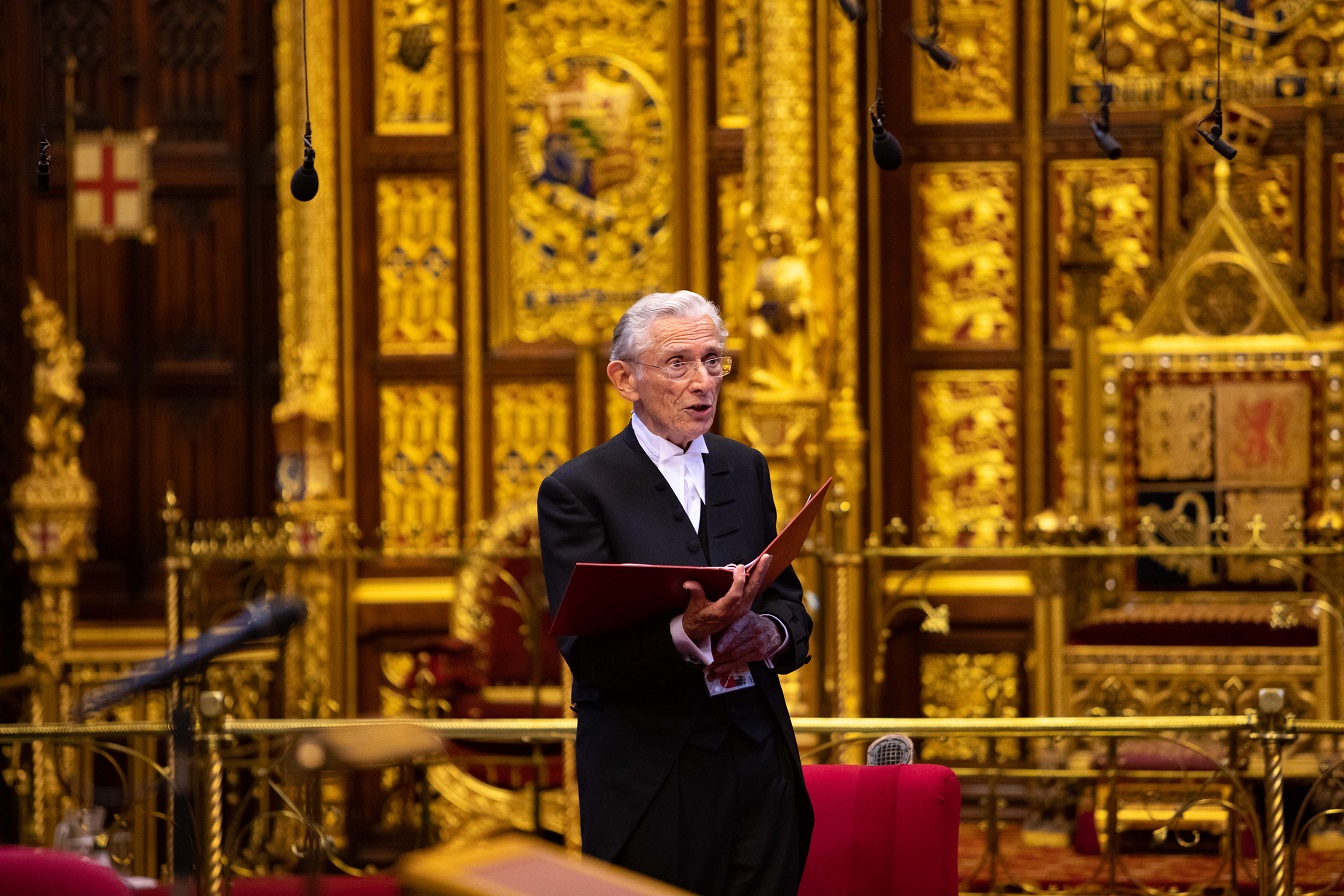 Proceedings began with a suitably impressive brunch in the Cholmondley Room with beautiful views over a wintry Thames. Participants were able to chat and network before a welcome speech from the Lord Speaker, the Rt. Hon. Lord Norman Fowler, introduced by the Lady Usher of the Black Rod, Sarah Clarke. Lord Fowler gave an overview of the history of his office and his role in the forthcoming debate, along with some useful tips as a long-serving Parliamentarian. His main message to everyone though was to relax, forget the potentially intimidating surroundings and really enjoy the experience. There was a great buzz in the room and the students seemed excited about the opportunity and their surroundings. 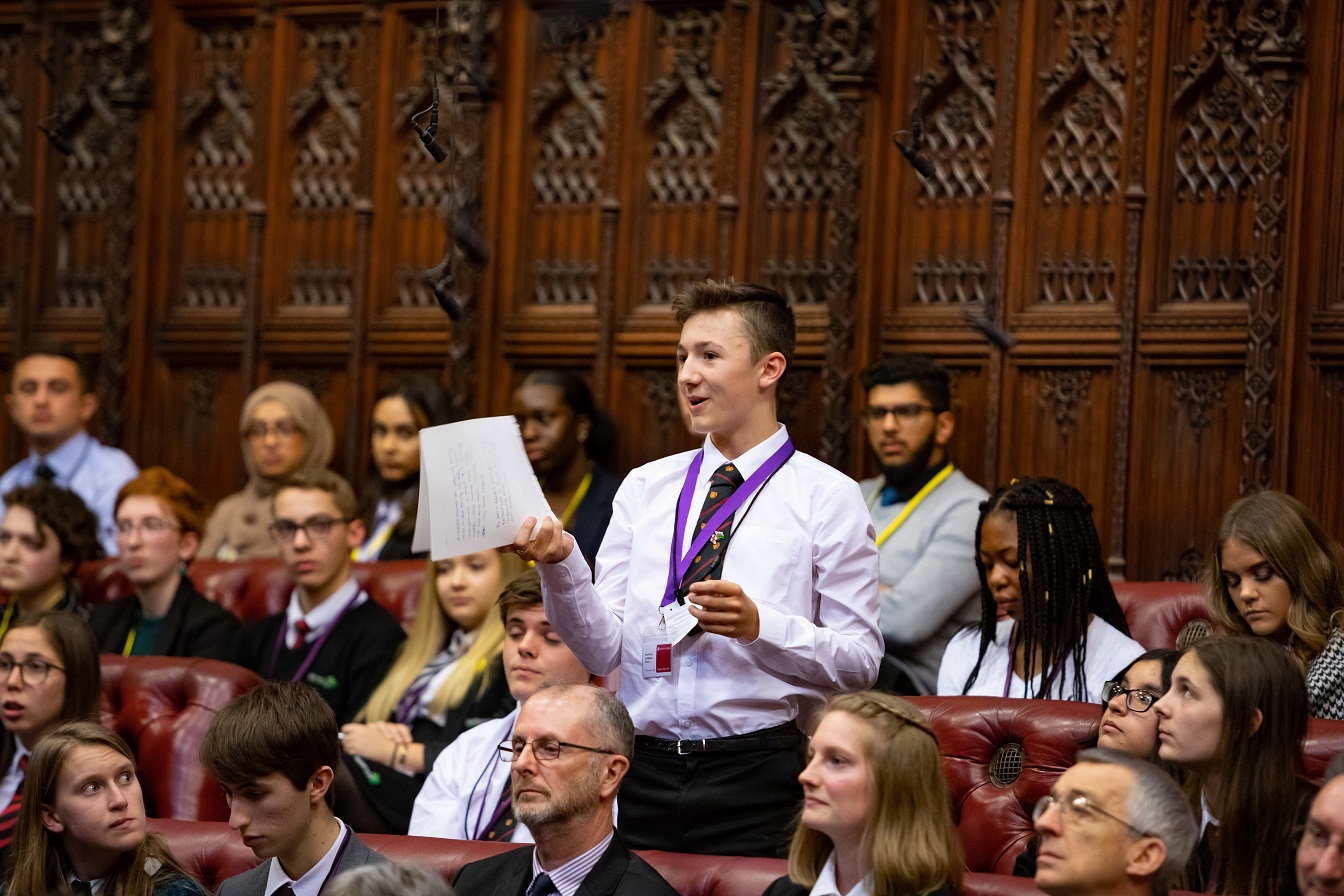 Participants were then led into the chamber by official House of Lords Doorkeepers to take their seats on the iconic red benches. It was hard not to feel in awe of the surroundings, especially as at the head of the room was the gilded royal throne used at the opening of Parliament. Once all participants were settled the Lord Speaker positioned himself on the woolsack which he claimed was more comfortable than it looked.

Three motions were debated in turn. For each, the problem was introduced and set in context and three possible solutions were presented by around five scheduled speakers. This was followed by an opportunity for participants to contribute from the floor. Most of the debating was carried out by the students, offering a range of arguments to a very high standard. The inevitable points were raised about the need to act immediately to address climate change and the apparent contradictions in doing this between growth and sustainability. In many ways the unexpected and probably unprepared contributions were most powerful and insightful – for example, the idea that making pragmatic sacrifices for future generations is and always has been part of what it means to be human. A member of the House of Lords summarised each motion and then a vote was taken, tallied up by the Doorkeepers.

The three motions debated were:

The quality of the speeches made by young people from the participating schools was astounding given the venue, where they appeared no more intimidated than they would be participating in a debate in their own school halls. Responses were reasoned but passionate and there was an impressive sense of the depth of concern over this issue that was felt by all participants, whatever their age or organisation. Apart from those with prepared speeches, there were many in the Chamber who were obviously determined to make their own points, confidently catching the eye of the chair and rising to their feet to deliver important contributions, within the 90 second time limit, when chosen. 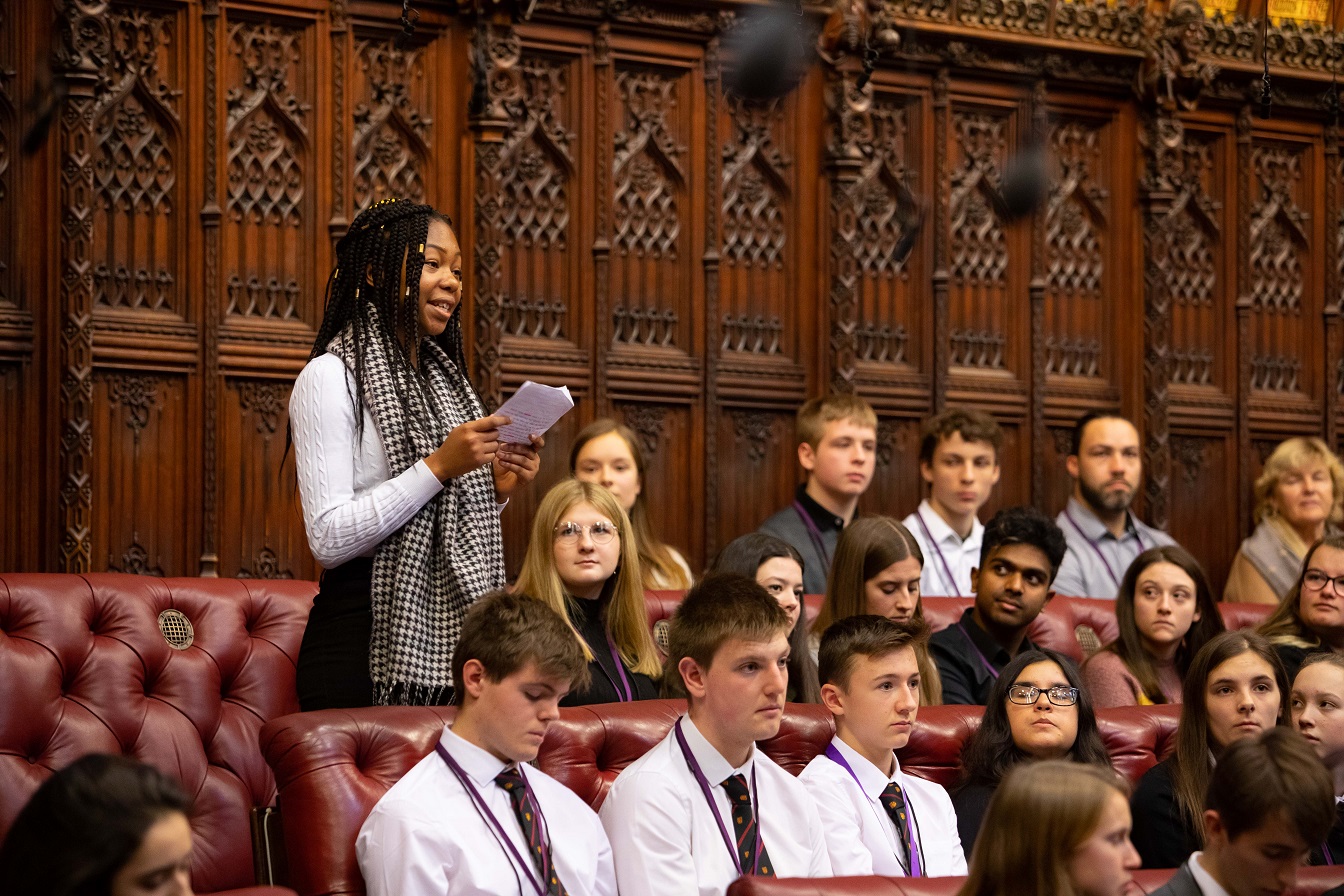 At the end of each debate, the proposed solutions were voted on by a show of hands by all present in the Chamber. The result for the first motion was close, with only one vote separating two solutions:

For the second motion, a large majority was in favour of changing lives now: we need an immediate and rapid reduction of greenhouse gas emissions in all private and industrial sectors.

The issue of development versus sustainability made the third motion the hardest one to debate, with many contributors concerned about balancing  the needs of poorer people and developing countries, as well as our 21st century expectations, against the need for a much more sustainable way of achieving our goals. The most popular solution was to advocate sustainability: you can’t stop progress, but we have to support emerging economies not to make the same mistakes we did, but to grow sustainably.

Overall then, the winning proposals were potentially the most draconian ones, in terms of taxation on polluters and immediate action to tackle the issues. However, these were a good reflection of the strength of feeling of those present on the pressing need for the issues to be taken seriously by governments as well as individuals.  In their summary speeches, the Lord Speaker and Deputy Speakers (Baroness MacIntosh and Lord Haskel) gave their personal thanks to the speakers and commented on how inspiring and impressed they were with their contributions and their ability to keep to the point being debated as well as their personal agreement with many of the points made. 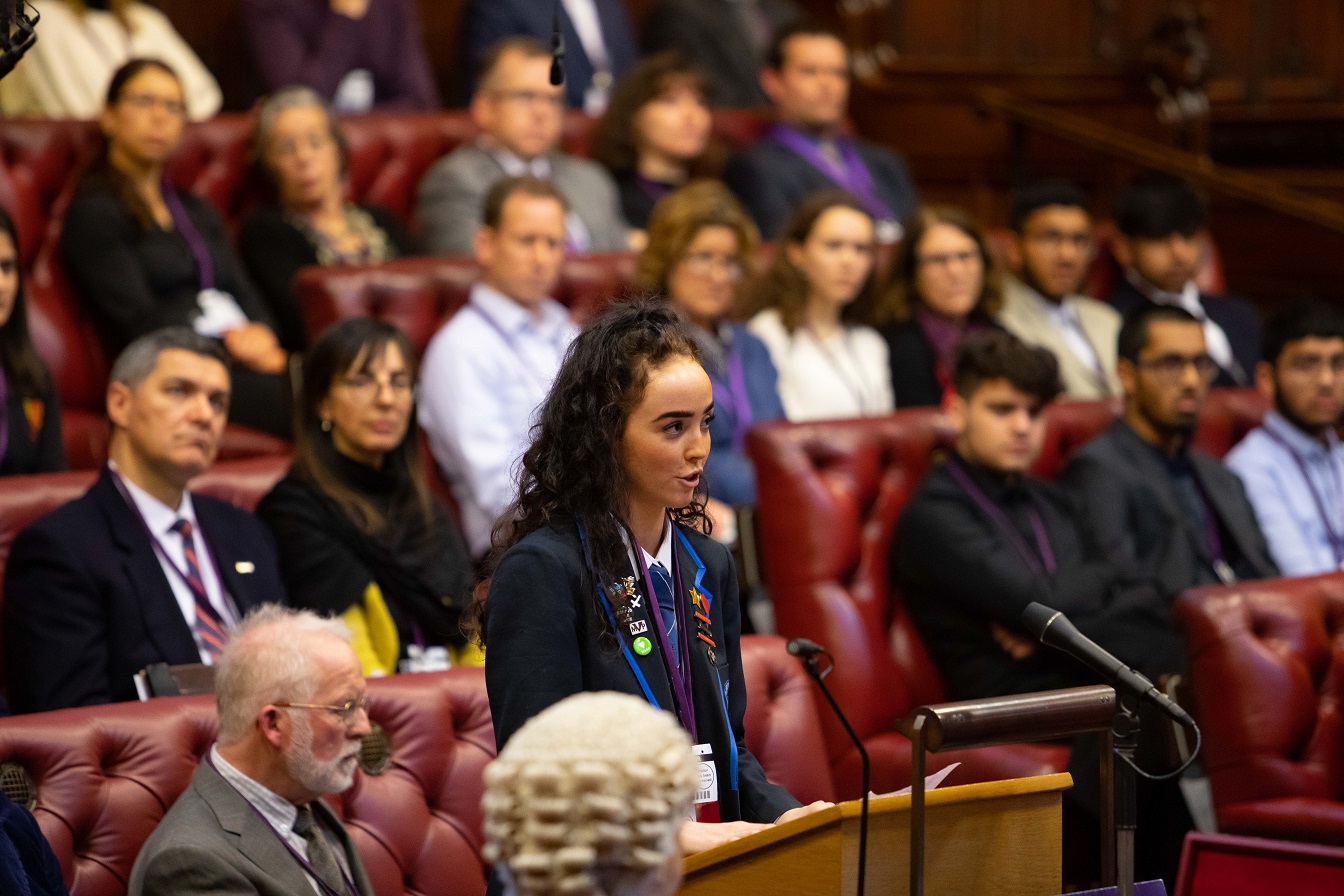 Put into the wider context of other events on the day, which included a Schools’ Climate Strike, the tragic knife attack near London Bridge and the period of purdah prior to the General Election, it will be interesting to see whether this event, its outcomes and the obvious strong feelings of participants carried any real weight in inspiring politicians to show courageous leadership on this issue.

A video from the event has been added to the Parliament website and can be found here.

The Society would like to thank all its staff and members who supported this event, and in particular Karen Aplin, Alison Brown and Jeremy Thomas whose reports contributed to this article.