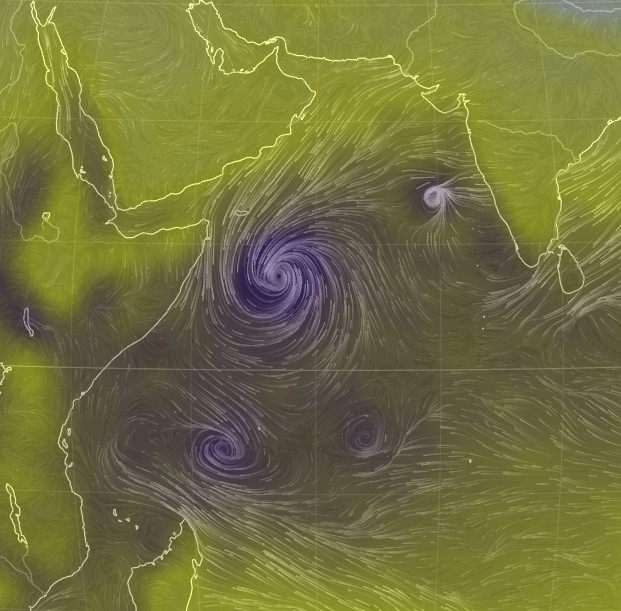 In December 2019, the Indian Ocean suddenly exploded with tropical activity, transforming it into one of the most active Indian Ocean Cyclone Seasons on record.

On December 3, no less than five tropical disturbances were churning in the West Indian Ocean. Two of these cyclones, Pawan and 07A developed in the Arabian Sea and another two, Belna and Ambali, were in the southern hemisphere. Just for good measure, a fifth cyclone, 92B appeared to the west of Sri Lanka.

To say this is rare would be an understatement. Some meteorologists are even suggesting that this is the first time that five simultaneous tropical disturbances have ever been reported in the West Indian Ocean.

Certainly it has been an active season. So far in 2019 seven cyclonic disturbances have developed in the Arabian Sea, and the average is just 1.7. Not only have there been a large number of storms, but many of those that have developed have become more intense than usual. Five strengthened into tropical cyclones, far exceeding the average of just one.

Fortunately for the recent coven of tropical disturbances, two of them dissipated before they could cause any problems. 07A and 92B were destroyed by high wind sheer, meaning the winds in the upper atmosphere were blowing at a different speed or direction to that at the surface. This effectively ‘pushes over’ a storm, making it impossible for it to develop into a powerful and organised cyclone.

Tropical Cyclone Pawan (pronounced Pavan) was also weakened by wind sheer before it tracked onto the coast of Somalia. The easing of the winds no doubt saved lives, but the torrential rain hit a region where homes are largely of rustic construction and it still proved deadly. The water caused widespread flooding and damaged essential roads. Sadly more rainfall is forecast over the next few days.

Tropical Cyclone Ambali was essentially a fish storm and didn’t threaten land, but it is still worth a mention because it grew so rapidly. According to the Joint Typhoon Warning Center, its wind speeds exploded from 40 mph to 155 mph in just 24 hours. This is the quickest 24-hour intensification on record in the Southern Hemisphere. Interestingly it then vanished almost as quickly as it appeared.

The final storm, Tropical Cyclone Belna, developed in the waters around the Seychelles. Fortunately the islands didn’t report much damage, just a few trees down and roofs torn from houses, but then the cyclone tracked towards Madagascar. Belna rapidly intensified just before making landfall in the northwest of the country, ensuring its impact worse than anticipated. At least two people are known to have died and more are missing.

In order to understand why there was this sudden explosion of activity in the West Indian Ocean, firstly we need to understand the conditions needed to create a tropical cyclone in the first place.

To start with, there needs to be an existing weather disturbance, such as a cluster of thunderstorms. The sea surface temperature need to be over 27°C, wind sheer should be low, i.e. the winds should be of similar speed and direction throughout the atmosphere, and this should all happen more than 5 degrees North or South of the equator.

This list of requirements explains why some oceans are more of a breeding ground for cyclones than others. The Atlantic, for example, often produces tropical storms in the summer, because it has a regular supply of thundery disturbances which track across the Atlantic from West Africa’s rainy season.

It also explains why some parts of the world are largely free from cyclones, despite their apparent vulnerability. Hawaii, for example, is a tiny archipelago in the middle of the Pacific, unprotected by any landmass, yet it is rarely affected by tropical storms. This is due to the prevailing winds in the area: high up in the atmosphere the winds are usually from the southwest, but in the lower part of the atmosphere they generally tend to blow from the northeast. This strong wind sheer acts as an invisible shield, cutting down any tropical system that gets too close.

As far as the West Indian Ocean is concerned, two things have changed which have encouraged the development of tropical cyclones. These changes are courtesy of two different weather events, the Indian Ocean Dipole and the Madden-Julian Oscillation.

The Indian Ocean Dipole is currently strongly positive and that has ensured the waters in the western Indian Ocean are over 30°C, roughly 1-2°C above average. As cyclones get their energy from the latent heat of the ocean, having temperatures significantly warmer than usual has ensured the storms can become far more powerful.

At the same time as the ocean provided extra energy, the Madden-Julian Oscillation (MJO) encouraged the initial disturbances which are necessary to initiate a tropical storm. The MJO is an enhanced area of cloud and rain which travels eastwards around the globe, making a complete navigation of the globe every 30 to 60 days. There has been an especially strong phase of the MJO over the western Indian Ocean over the last few weeks and this has encouraged storm development.

These two phenomena are entirely natural, but acting together they have transformed the West Indian Ocean cyclone season into one which will be remembered for many years to come. It is unknown how the Indian Ocean Dipole will respond to climate change, so it will be interesting to see whether a season of this magnitude will be repeated in the years to come.