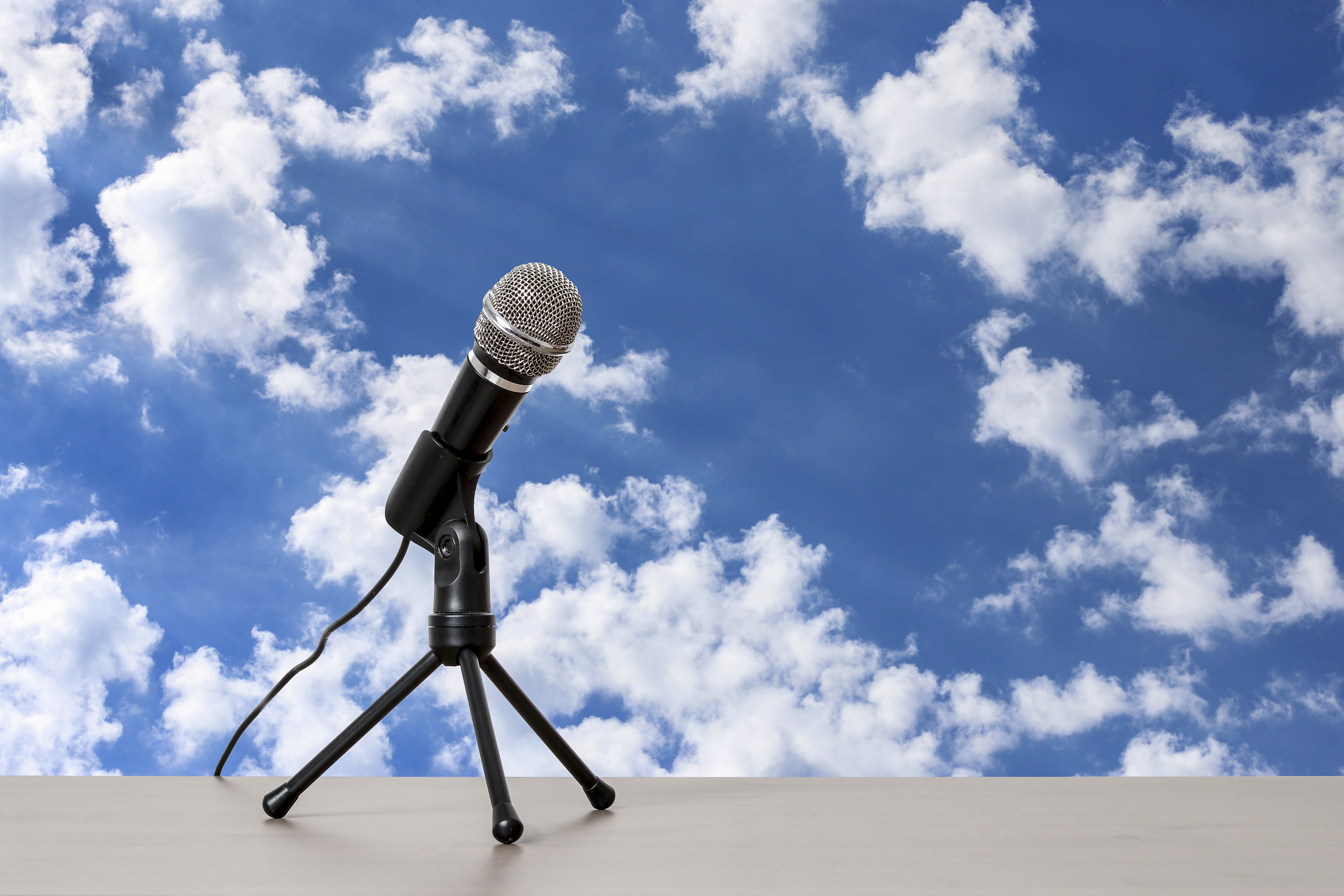 Let's talk about the weather

Prof Liz Bentley, Chief Executive of the Royal Meteorological Society, reflects on a busy summer when weather and climate featured heavily in the media.

A recent poll undertaken for British Science Week found that talking about the weather was the top British pastime ahead of drinking tea and queuing. During the summer of 2019, there was probably even more reason to talk about the weather as we experienced heatwaves and flooding, plus there were several important climate reports published that summarised the State of the UK climate and the links between land and climate change.

I regularly get called upon by the media to talk about the weather and climate. Over the last ten years, I would estimate being involved in over 1,000 media interviews and have built up a really good relationship with media journalists, so much so they feel they can call me up at any time, day and night, to see if I will come on and talk about the weather. The vast majority of interviews are for local radio stations that are happy to do an interview over the telephone, which makes it a whole lot easier to fit them in at any time and from anywhere. Usually, I get some time to prepare for an interview a few hours ahead or maybe the next day, but occasionally I’ll get a call from local radio stations asking if I can go on air in the next few minutes – definitely seat of the pants broadcasting.

It has definitely been unusually busy, media-wise, this summer purely down to the fact that there has been so much to talk about.

It began back in June – heavy rain led to localised flooding across different parts of the country. You might remember the Steeping River at Wainfleet in Lincolnshire burst its banks, and over 300 properties had to be evacuated. Meanwhile, across Europe, the heat was beginning to build and by the last week of June, local temperature records were being broken, and France recorded an all-time record high temperature of 46 °C on 28 June during a 9-day heatwave.

Media requests started to come in thick and fast. I even did a few UK radio interviews while at a conference in Copenhagen during the last week of June to talk about the European heatwave and what was causing it.

It’s quite normal to have a run of media interview requests when there is an extreme weather event, and then it all goes quiet again for a few weeks or even months. But this summer, the media requests never really stopped.

Spectacular lightning displays across the UK in July led to a number of interviews – some wanting to talk about the loudest clap of thunder they had ever heard and others asking why they could see lightning but not hear any thunder.

Another opportunity to do some media arose because of the Royal Meteorological Society’s Student and Early Career Scientist Conference at the University of Birmingham in early July, when I had the pleasure of meeting Victoria Gill (@Vic_Gill), BBC News science and environment correspondent, who was a keynote speaker at the event. Just a couple of weeks later, when Victoria was looking for someone to talk about the UK heatwave and record-breaking temperatures, she dropped me a line, and we discussed a possible angle the report could take and potential venues to film a piece for BBC News.

A few days later, on Thursday 25th July, we met at Kew Gardens in London, where Victoria was filming a piece for the Six and Ten O’clock News programmes. It had been predicted that the UK’s highest temperature record was likely to be broken that day, and Victoria wanted to cover this and also the impact climate change is having on the frequency and intensity of heatwaves and high-temperature events. I can tell you it was not only hot that day but very humid too especially being outdoors – and when the film crew decided to interview a horticulturist inside one of the greenhouses, I politely declined to join them and opted for a bit of shade outside under a tree.

What was interesting about that day was that some thunderstorms were starting to build off the south coast much earlier than was predicted and were moving slowly northwards. By lunchtime, clouds associated with the thunderstorms were pushing in over London, reducing the possibility that the temperature record would be broken. In the end, it was broken with the Cambridge Botanic Garden recording 38.7 °C, and there was another media story behind that record being confirmed a few days later as well.

The second European heatwave of the summer took place between 21st and 28th July, with all-time high-temperature records being set in Belgium (41.8°C), Germany (42.6°C), Luxembourg (40.8°C), and the Netherlands (40.7°C). The media interest continued as the focus shifted to climate change and the impact on health, infrastructure etc during such extreme temperature events.

On 31 July, the Met Office published its annual State of the UK Climate 2018 report in the Royal Meteorological Society’s International Journal of Climatology. The report highlighted that the top ten warmest years in the UK had all occurred since 2002, and none of the ten coldest years had occurred since 1963, which further indicated a changing climate. Since the report was circulated to the media under an embargo a day or so in advance, I received numerous media interview requests, all lined up for 31 July. It started with a BBC Breakfast interview live from the roof of Broadcasting House in London, followed by the Radio 4 Today programme and a BBC News interview interspersed with a few local radio interviews either on my mobile or from one of the radio studios at Broadcasting House. I was then contacted by BBC GNS (General News Service), who I have worked with previously when there have been weather news stories. Basically, they allocate one or two hours and offer out 5-minute slots to regional radio stations who dial in to interview you about a news story. I agreed to do an hour’s slot and sat in a radio studio doing 12 back-to-back radio interviews on the State of the UK Climate report.

The World Meteorological Organization announced on 1 August that July 2019 was tied for the hottest month ever recorded with July 2016. This led to more media interest and questions relating to climate change.

As the heatwave subsided and the rain began to fall, the news story shifted from heat to flooding.  Floodwater caused disruption to rail and road networks in different locations around the UK, but the main news story was at the Toddbrook Reservoir at Whaley Bridge when concrete slabs on the dam's spillway were dislodged by heavy rain, putting the dam at risk of collapse and leading to 1,500 residents being evacuated from Whaley Bridge and the surrounding areas.

An unsettled start to August and a deep area of low pressure and associated strong winds (84mph gust was reported at The Needles on the Isle of White on 10 August) led to more media interviews, including Sky News. 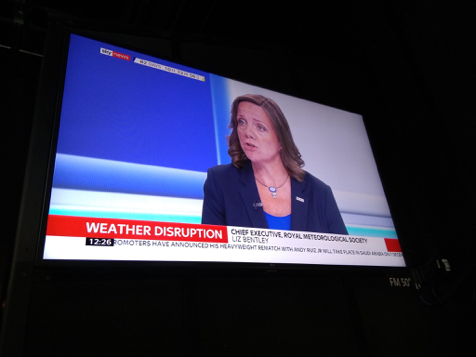 August itself was rather unsettled, with temperatures below average on a number of days. So as we approached the late August bank holiday weekend and the forecast was for some warm, summer sunshine, the media interest increased again. In fact, it was a record-breaking weekend with the hottest late August bank holiday weekend - 33.3°C recorded at Heathrow on Sunday – and the hottest bank holiday Monday - 33.2 °C also at Heathrow. The previous record for the bank holiday Monday (28.2 °C in 2017) was exceeded by 5 degrees raising the question of climate change again. It is difficult, when many people are enjoying a return to summer weather after a damp August, to talk about climate change and why breaking these records is not okay. It is important to look at the wider implications of climate change here in the UK and internationally and the additional pressures it places on ecosystems. One presenter even started an interview with ‘let’s get Brexit delivered as who needs Europe now that we’ve got our own hot weather and ability to grow wine in the UK – what do you think, Prof Liz Bentley from the Royal Meteorological Society?’. It did provide a perfect opportunity to talk about climate change – although you are starting on the backfoot with that kind of introduction.

One further opportunity that arose because of all the media activity was being invited on the BBC Radio 4 Broadcasting House programme to review the Sunday papers. I have done the Sunday paper review before for BBC Berkshire, so knew what to expect. It is very different from other media interviews where you know what you are going to talk about in advance. It is not until you turn up on the Sunday morning and start ploughing through the papers that you decide what you want to talk about. Thankfully there were lots of weather stories in most of the Sunday papers, and, as we know, we all love to talk about the weather.