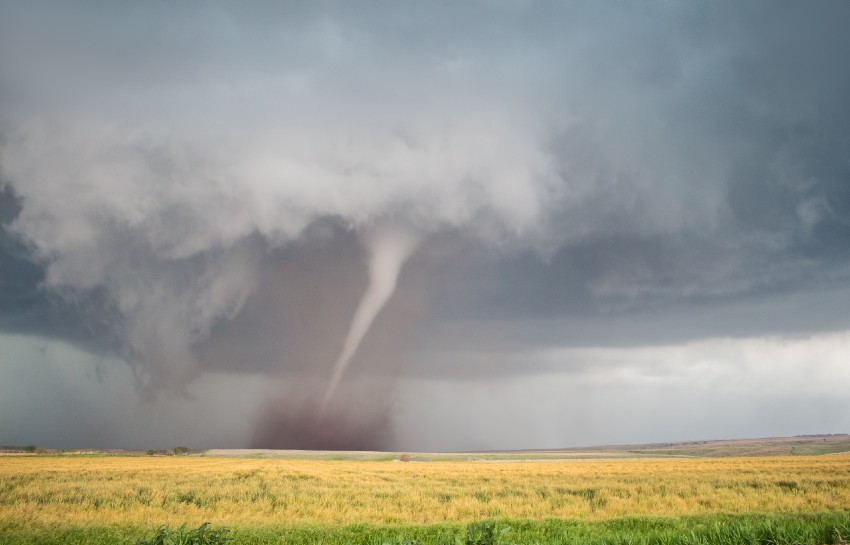 I could not resist mentioning tornadoes in a talk I was giving last week on the physics of thunderstorms to a joint meeting of the Institute of Physics and the Institute of Engineering and Technology. Always spectacular and at times devastating, I have been fascinated by them for years. We tend to hear more about tornadoes in the US, and they do have around 75% of the world’s tornado occurrences, but many other locations across the globe have the right conditions for tornadoes to form. Canada comes second to the US in the number of tornadoes, and then in Europe, it’s the UK and a swath of countries in Europe’s tornado alley that runs from France, through Germany and Poland to Russia. South America, Asia, Australia and southern Africa also regularly see tornadoes. They are so widespread because the conditions to form tornadoes occur in so many different places.

What are the conditions for tornadoes to form?

At a very simple level, you need cold, dry air and warm, moist air coming together. That’s why we see this well-known tornado alley in the US formed along the long diagonal line spreading up into Canada, where the cold air from the Rocky Mountains meets the warm, moist air travelling north from the Gulf of Mexico. At these cold-warm air boundaries, where you have a strong temperature gradient, lots of moisture, and so lots of convectively available potential energy, then very intense thunderstorms can form, and these are the birthplace of tornadoes. These intense thunderstorms draw the warm air up and into the cloud, and the cold air flows down, spreading out from the bottom of the cloud, forming a strong convective circulation of warm air in and up, cold air down and out.

I’m sure you have felt this yourselves. Have you ever been out and about on that warm sunny summer afternoon and felt the breeze pick up a little, with a slight chill, then 30 minutes later, the storm shower follows? Well, that cool breeze is the nose of cold air pushing out as a gust front ahead of the storm. If you know what you’re looking for, it’s a great predictor of pending showers and has rescued several BBQs and washing drying out on the line. Going back to the thunderstorm, what can happen is that as the cold air spreads out, it cuts off the warm air supply, which is like turning off the gas, and the storm will dissipate away. But if the winds change direction with height, what we call wind shear, then this can help to separate the up and down flows of air and keep the thunderstorm going. With enough energy, the big brother of all thunderstorms, called supercells, are borne, which in turn give birth to tornadoes.

How to make a tornado in a jar

There is a simple demonstration you can do at home to show why in particular, we see the characteristic funnel that defines all tornadoes. So go on, take two plastic fizzy drink bottles. Fill one with water and place the other upside down on top of the first so they are joined at the two screw tops. Then tape them together so you have what looks like a plastic bottle, a water-based egg timer. If you tip it up, the water tries to fall to the lower bottle as the air tries to pass up into the top bottle, and it slowly glugs through.

Now, as you tip it over to try again, hold the bottles in the vertical and move them round in a circle to get the water in the bottles to spiral round, and you’ll see something that looks like a tornado forming in the water.

You will also notice that the water and air pass each other much quicker. That’s what is happening in the tornado. This is because the air wants to equalise, and the fastest way to do that is through a spiral, and it really is moving fast, reaching speeds of up to 300 mph. That causes the air pressure inside the funnel to drop significantly, so the air cools and condenses, forming the funnel cloud. Physicists know this process well as the Bernoulli effect.

The speed of the winds also helps lift objects into the tornado. As the air passes rapidly over the top of the object, it creates lift, like in an aeroplane wing, because the pressure is lower on top of the object than underneath it. The forces are huge because they increase with the cube of the wind speed, so double the speed, which exerts eight times the lift on the object. That’s why tornadoes are so destructive. Ted Fujita developed a scale that defines the damage caused by tornadoes, known as the Fujita scale. The scale has been adapted over more recent times, but the original scale was defined as F0 up to F16, but only F0 (light damage) to F5 (incredible damage) were used.

It has become trendy over recent years to go on storm-chasing holidays to follow tornadoes, but you don’t have to go much further than the south coast in the UK during the summer months to sight a tornado out at sea – these are called water spouts and are commonly spotted in the Dover Straits. Also, if you’ve never seen pictures of a fire tornado, you should definitely Google that (other search engines are also available).

by Prof Paul Hardaker, Chief Executive of The Institute of Physics