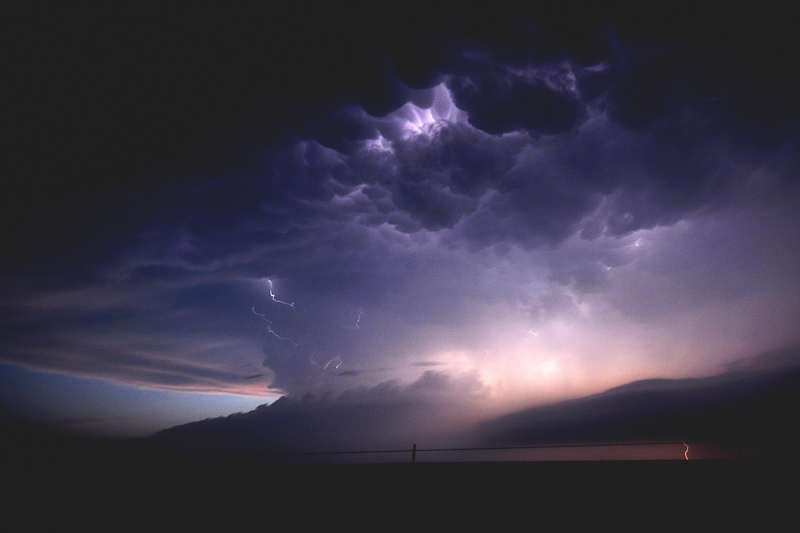 Cammie Czuchnicki, along with her boyfriend Tim, runs Weather Studios. They are both committed storm chasers and keen photographers – a mixture that creates some spectacular pictures. Cammie was awarded first place in the 2013 Royal Meteorological Society's South East annual photography competition. The winning photograph (above) is called 'Tornadic Supercell at night in Kansas: May 2012'. The image captures the last storm in a line of four during a memorable evening in Russell County, Kansas. Several chasers intercepted a long-lived tornado underneath this storm but I couldn't turn down the opportunity to watch from afar and capture some of the prolific lightning. Cammie tells us why she became a storm chaser.

You can chase storms all over the world, but the best place by far is in the US, where the flat landscapes and ideal atmospheric setup lend themselves to some of the most exciting weather you're likely to find. Although no state is entirely free of tornadoes, they occur more frequently in the plains between the Rocky Mountains and Appalachian Mountains, more commonly known as 'Tornado Alley', and many UK based storm addicts travel across to the US each spring and summer to observe these dramatic displays of nature. According to the National Climatic Data Center, NCDC, in the US, Texas reports more tornadoes than any other state, but that might down to sheer size of Texas compared to other states.

When I was little I was really scared of storms and have many memories as a child hiding under the kitchen table whenever a storm passed overhead. But mixed with this fear came excitement and wonder. Often, when the weather is at its worst, this is when it is the most magnificent and beautiful. As I learned more about 'Tornado Alley' it became an ambition to hang out the back of a 4x4, taking photos of a tornado chasing me. My interest in storms stems from a passion for experiencing nature playing on a large scale (at least from a human perspective), particularly when those events result in the incredible visual and physical effects that can both scare and inspire you when you encounter them. Until I met these storms in person I had no idea just how much wonder they would inspire. Chasing severe weather is something that, if it grips you, can really take hold, meaning that you crave those few weeks of a year where you'll drive over 500 miles per day and on a good day get rained, hailed and blown around like crazy.

My boyfriend, Tim, and I have been storm chasing now for the last three years and are completely hooked. We have a love of gadgets and technology and storm chasing requires combining lots of cutting edge tools. We take laptops, a roaming data card to get online, to download radar and to access weather models. Our GPS enables us to see where we are in relation to the storms, which helps with positioning and staying safe. We also have cameras, tripods and lenses to capture those magic moments.

We launched Weather Studios, an online catalogue of dramatic storm images, captured during recent trips to the US. The website allows us to share our experiences with anyone and everyone.

For anyone interested in storm chasing I would say the weather is unpredictable, so go with low expectations to avoid disappointment. Be prepared to drive a lot. I would also recommend trying to learn about why these storms happen – it will enhance your trip no end and help with your forecasting and positioning amongst the storms. The more you put in, the more you get out.

You can visit the Weather Studios website at www.weatherstudios.com to see some of the spectacular photos from the last 3 years. The website also includes a blog with updates from annual storm chasing trips to the US. If you'd like to talk about any of the images, or just chat about storms generally, please email Weather Studios at info@weatherstudios.com - they'd be very happy to hear from you.