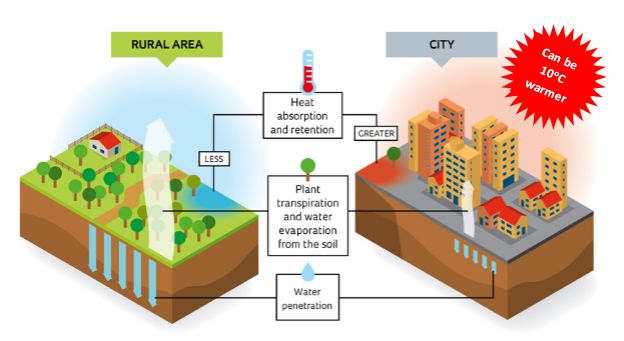 We may be at the end of the heatwave season, but Urban Heat Islands (UHI) can occur at any time of the year. Here, we explore the UHI and its implications through some bite-sized Q&As.

Q. What is the Urban Heat Island (UHI) effect?

The urban heat island (UHI) effect is a phenomenon describing the elevated temperatures felt in towns and cities compared to rural surroundings and particularly felt at night-time as the heat retained by artificial surfaces is slowly released keeping temperatures higher that in the countryside, combined with other impacts such as the reduced cooling effect of vegetation in urban areas, and the compounding effect of anthropogenic heat. UHI up to 8degC have been felt in UK cities, whilst cities the size of London have experienced temperatures in the order of 10degC.

Q. Why is it important to find out how much warmer the city gets than the surrounding countryside?

More than 50% of the World’s population are now living in urban areas and this is expected to increase to 70% by 2050. Consequently, the effects of extreme events (e.g. heatwaves, storms, floods, blizzards, hurricanes and tornadoes) are felt more strongly when they occur in populated environments. The severe European heatwave of 2003 was the warmest for 500 years, and was considered to be responsible for 14,802 and 2,045 excess deaths in France and the UK, mostly in urban areas. Temperature of up to 38.5degC was felt in the UK – and although these temperatures may be common place in other parts of the globe, this is unheard of in the UK. Indeed, the 2003 heatwave may be typical by 2040.  Even the heatwave we experienced in July 2013 - which saw an abnormally hot, dry and sunny July and temps up to 34.2degC - is thought to have resulted in up to 760 excess deaths.

There are a lot of common impacts that both urban and rural areas are vulnerable to, but the fact is that urban areas are more vulnerable to a number of these. As we mentioned, elevated temperatures and heatwaves are felt more strongly in urban areas, and this, coupled with higher relative humidity and less ventilation, means that cities are particularly uncomfortable – in contrast to this, during extreme cold weather, urban areas have slightly milder temperature so there is often less ice which is a positive effect for transportation systems in cities, in contrast to rural roads.

The key point is that most people live and work in towns and cities, and there is more infrastructure located in urban areas, so any impact of climate change that occurs is going to be felt more strongly and by a greater number of people within urban areas, which efforts are being increasingly focused on these environments; essentially there is more to lose in these areas both in terms of society and the economy.

Q. What are the effects of heatwaves and urban heat and will concerns over urban heat grow as urbanisation spreads?

Awareness and concern for excess urban heat is increasing; for example, the energy sector are concerned about the impacts on electricity transformers as temperatures increase and there is an increased demand for energy for air conditioning units.  However, since all networks are inter-connected (for example, the transportation network relies on communications networks, and both rely on the energy network) if one network is effected by heat, there is a cascading effect on all connected networks.  It is therefore expected that level of concern will increase with time, not only as we become more urbanised, but also as the effects of climate change become realised. However, if vulnerable areas of the city can be identified, targeted mitigation strategies can be developed to improve our responses during such events.