Why do clouds form? Part 2: What goes up must cool down

This is the second in a series of articles to explain cloud formation in the atmosphere. For any atmospheric scientists in the audience, I accept that this is not an especially rigorous treatment of the subject, but it gives you the gist of the processes involved.

In Part 1, I described how ‘adiabatic’ processes can raise or lower temperature solely by increasing or decreasing pressure. This article is about how this process works in the atmosphere.

At the end of the first article, I asked, ‘What is the easiest way to lower air pressure rapidly in the atmosphere?’ The difference between the highest and lowest pressure ever recorded at sea level is around 200 hPa (hectopascals are exactly equal to millibars). However, the change in pressure in the vertical is much more rapid. A change of 200hPa is the equivalent of raising a parcel from sea level to around 6000 feet (1900m). That’s 200 hPa in just over a mile!

So isobars in the vertical are very close together. This would produce very strong vertical winds upwards from ground level. Why does this not occur? We are obviously missing something. In the vertical, that something is usually gravity. The downward force of gravity balances the upward force of the pressure gradient. This fine balance means that even small forces due to other effects can have a large influence on the behaviour of the atmosphere, but more of that later.

The atmosphere is very complex with many different influences on temperature and pressure. We need to simplify the problem so that we can make sense of it. One way this is done is by running sophisticated numerical models on powerful computers. These models have become more and more sophisticated, but they are still approximations.

Human forecasters use numerical models, but they also use what are known as ‘conceptual’ models, ways of thinking that are not perfect but can produce useful answers in real-time. Fronts are conceptual models. I have never seen a blue line with triangles cross the sky, but I have used the conceptual model to forecast the weather quite accurately… on occasion!

What we need is a conceptual model that we can use to look at the effect of vertical motion in the atmosphere. Our chosen model is the ‘air parcel’. To set up our model, we give our air parcel certain properties and set limits.

Characteristics and limiting conditions for an Air Parcel 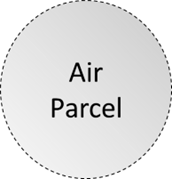 An air parcel is small enough for there to be no variation of temperature, pressure or humidity within it

Initially, an air parcel has the same temperature and humidity as the surrounding atmosphere.

At all times, an air parcel is at the same pressure as the surrounding atmosphere.

An air parcel is contained within an invisible and perfectly elastic membrane that prevents mixing with the surrounding atmosphere.

Our assumptions must be reasonably valid over a timescale of, say, around 3 hours.

If we have a parcel of air taken from the atmosphere, it will have a predictable amount of oxygen, nitrogen and a few other trace gases. It will also have a variable amount of water vapour – its humidity.

Adiabatic processes tell us that for a rising parcel, falling pressure causes the parcel to expand and cool. For a falling parcel, rising pressure causes the air to be compressed and warmed. The laws of thermodynamics allow us to calculate the temperature change associated with a particular change in pressure or, for our purposes, a particular change in height.

If we were dealing with a truly adiabatic process, rising parcels would cool at a rate of 9.8 ºC per km. By the way, true adiabatic processes are perfectly reversible, so a falling parcel will warm at the same rate. Unfortunately, the real world is not perfectly adiabatic, but a value of around 10 ºC per km is a reasonable approximation. This equates to about 3 degrees per thousand feet in ‘aviation-speak’.

Of course, this only shows the approximate impact of adiabatic processes. There are many other processes that produce a warming or cooling effect at different levels of the atmosphere. These are called ‘diabatic’ processes and operate outside our model. The good news is that most operate on timescales well over the 3-hour interval, so when using the parcel model, their effects are ignored.

As I said earlier, every parcel will contain an amount of water vapour. So long as it remains a vapour, then all is well. Water vapour behaves pretty much like the other atmospheric gases. The problem is that an air parcel can only ‘hold’ a certain amount of vapour without changes occurring*. The maximum amount a parcel can ‘hold’ decreases with temperature. The percentage of this maximum present in the parcel is known as the relative humidity.

As a parcel rises and cools, the amount of water vapour in it remains constant (where would it go?!) and eventually, you will reach a point where there is ‘too much’ vapour. We say it changes from an ‘unsaturated’ parcel to a ‘saturated’ parcel, and the vapour will start to condense into liquid water.

* This is scientific nonsense, it is actually all about vapour pressures and the like, but I think this way of looking at it describes the situation quite nicely!

Condensation releases energy quickly and certainly within our model timescale. The release of energy warms the parcel and offsets the adiabatic cooling. The degree of warming depends upon the amount of water vapour left in the parcel. As condensation continues, there is more liquid and less vapour to condense. The offsetting decreases as the temperature falls until, at a temperature of around -40 ºC, the rates are essentially the same. Starting from the same point, a ‘saturated’ parcel is always warmer than an ‘unsaturated’ parcel at the same height.

The effects and behaviours of water in its various forms are well understood. We can make allowance for them and, within the limits of our model, estimate the temperature and humidity of any parcel at any height and the likelihood of condensation occurring.

All we need now are mechanisms to make air move in the vertical, to rise and/or sink.

That is the subject of the next article, part 3 in this series of articles to explain the formation of clouds in the atmosphere.