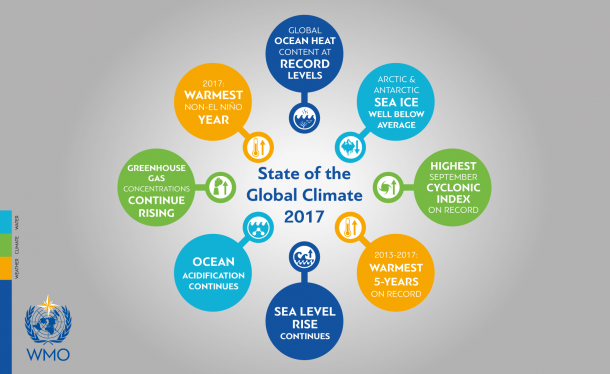 2017 expected to be third hottest on record

The World Meteorological Organization (WMO) has released its provisional Statement on the State of the Climate. It estimates that 2017 is likely to be one of the warmest years for global average surface temperature, with many high-impact events including catastrophic hurricanes, floods, heatwaves and droughts.  The Statement was released on the opening day of the United Nations climate change conference in Bonn.

The WMO based its temperature assessment on global mean surface temperature datasets for January – September from several organisations, including the HadCRUT4 dataset compiled by the Met Office Hadley Centre and the University of East Anglia’s Climatic Research Unit. The average global temperature from January to September 2017 was approximately 1.1°C above the pre-industrial era.

The Met Office’s latest estimate for 2017 suggests it will be the second or third warmest (with 2016 remaining top and 2015 second or third) in a record stretching back to 1850. The 2017 figure is important because, although not a record-breaker, it will be the warmest year in the series which has not been influenced by an El Niño.

Professor Adam Scaife FRMetS from the Met Office stated: “The global mean surface temperature this year looks likely to agree with the prediction we made at the end of last year that 2017 would be very warm but was unlikely to exceed the record temperature of 2015 and 2016.”

The Statement also highlighted the fact that long-term indicators of climate change such as increasing carbon dioxide ((CO₂) concentrations, sea level rise and ocean acidification continue “unabated”, with Arctic sea ice coverage remaining below average and the previously stable Antarctic sea ice extent, at or near a record low.

The WMO also released their annual Greenhouse Gas Bulletin which described the state of greenhouse gases in the atmosphere, based on Global observations through to 2016.

This is due to a combination of human activities (population growth, intensified agricultural practices, increased land use and deforestation, industrialisation and associated energy use from fossil fuel sources) as well as strong El Niño events.

“Without rapid cuts in CO₂ and other greenhouse gas emissions, we will be heading for dangerous temperature increases by the end of this century, well above the target set by the Paris climate change agreement,” said WMO Secretary-General Petteri Taalas.

“CO₂ remains in the atmosphere for hundreds of years and in the oceans for even longer. The laws of physics mean that we face a much hotter, more extreme climate in the future. There is currently no magic wand to remove this CO₂ from the atmosphere,” said Mr Taalas.

The last time the Earth experienced a comparable concentration of CO₂ was 3-5 million years ago, when the temperature was 2-3°C warmer and sea level was 10-20 meters higher than it is now.