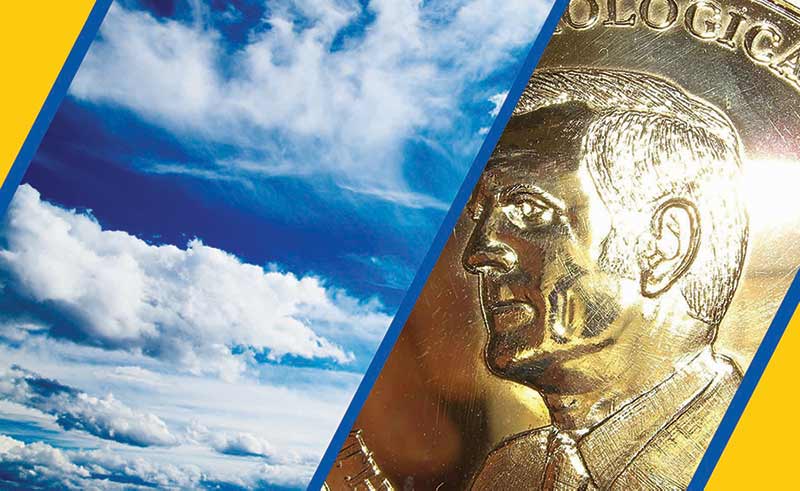 We are delighted to announce the Royal Meteorological Society (RMetS) Awards and Prize Winners for 2019, recognising people and teams who have made exceptional contributions relating to weather, climate and associated disciplines.

This year’s awards received some outstanding entries, with recipients being held in high regard across the international community. Due to social distancing guidance, it will sadly not be possible to have a physical presentation ceremony. However, we are taking this opportunity to showcase each of the 18 worthy winners on our website, outlining their achievements alongside a winner’s acceptance message. They will also be showcased on our social media channels throughout the week of 22 June 2020.

The internationally renowned climate scientist, Professor Keith Shine has been awarded the Mason Gold Medal, which ranks alongside the Symons Gold Medal as the premier award of the Society and awarded on alternate years to a Fellow of the Society.

Professor Shine’s nomination recognises his substantial contributions to our fundamental understanding of the climate system and his ground-breaking research. His close involvement with the Intergovernmental Panel on Climate Change (IPCC) Scientific Assessments, also included a share in the Nobel Peace prize for his contributions to the 2007 IPCC report. He is a significant voice in the public understanding of climate change and his tireless and selfless support of other scientists has earned him unrivalled respect and several prestigious awards.

Professor Shine said: “I am delighted to receive the 2019 Mason Gold Medal. Early in my career, the Antarctic ozone hole was discovered. It was a concerning, puzzling, exciting few years; playing some small part in unravelling the mystery was an important formative experience, as was involvement in subsequent national and international ozone assessments. My involvement in early assessments of the Intergovernmental Panel on Climate Change set a lasting direction of travel for my research and teaching.

So many colleagues and students have played a major role in the scientific journey that has led to this award. Thank you!”

Professor Palmer said: “I am truly delighted and humbled to be made an Honorary Fellow of the Society. The Met Soc has been a very large part of my professional life for over 40 years… It was a wonderful honour to have spent two amazing years as President, one that I will always cherish.”

Thank you to all our members, colleagues and associates who nominated individuals for the awards this year. Congratulations to all!

Awards and winners for 2019 are detailed below and you can read full citations and acceptance messages on the website at rmets.org/awards2019.

Mason Gold Medal – Professor Keith Shine, University of Reading
For substantial contributions to our fundamental understanding of the climate system.

The Buchan Prize – Professor Adam Scaife, Met Office and University of Exeter
For his numerous pioneering and important publications, ranging from atmospheric dynamics to long-range forecasts.

Dr Gerard Kilroy for his paper on tropical cyclones, which has opened up a whole new avenue of research and further papers on this topic.

The FitzRoy Prize – Dr Helen Dacre, University of Reading
For her leading research on volcanic ash clouds, enabling a more nuanced and flexible approach to assessing the risk to aviation. Dr Dacre has recently extended the forecast data to the problem of Chilean wildfire prediction.

The Adrian Gill Prize – Professor Ken Carslaw, University of Leeds and Institute for Climate and Atmospheric Science
For his influence on the field of atmospheric science, bringing aerosol physics from the margins, into the heart of climate understanding and climate modelling.

The Climate Science Communications Award – Professor Richard Betts, Met Office and University of Exeter
For increasing our understanding of climate change, resulting in his MBE in June 2019. Professor Betts plays an important role by engaging widely with both environmentalists and sceptics, being trusted and respected by both.

The Society’s Outstanding Service Award – Mrs Marcia Spencer
For being an important member of the Society’s team for almost ten years, overseeing an active meetings programme and successfully delivering more than 700 events.

The Gordon Manley Weather Prize – Mr David Bowker, Lockers Park School, St Albans
For contributing to the Society as a keen amateur member. David has written seven papers for Weather and contributed many photographs for more than 35 years. He was an invaluable member of the Weather Editorial Board between 2014 and 2019.

The Malcolm Walker Award – Dr Emma Howard, University of Oxford
For her work on the role of tropical lows and the important role of the Congo Air Boundary in climate change. Emma’s research has accelerated our grasp of climate dynamics for a key region of the planet.

If you know someone who you think should be recognised for their work or commitment to meteorology, please consider nominating them for the 2020 awards. Details at rmets.org/awards-and-prizes