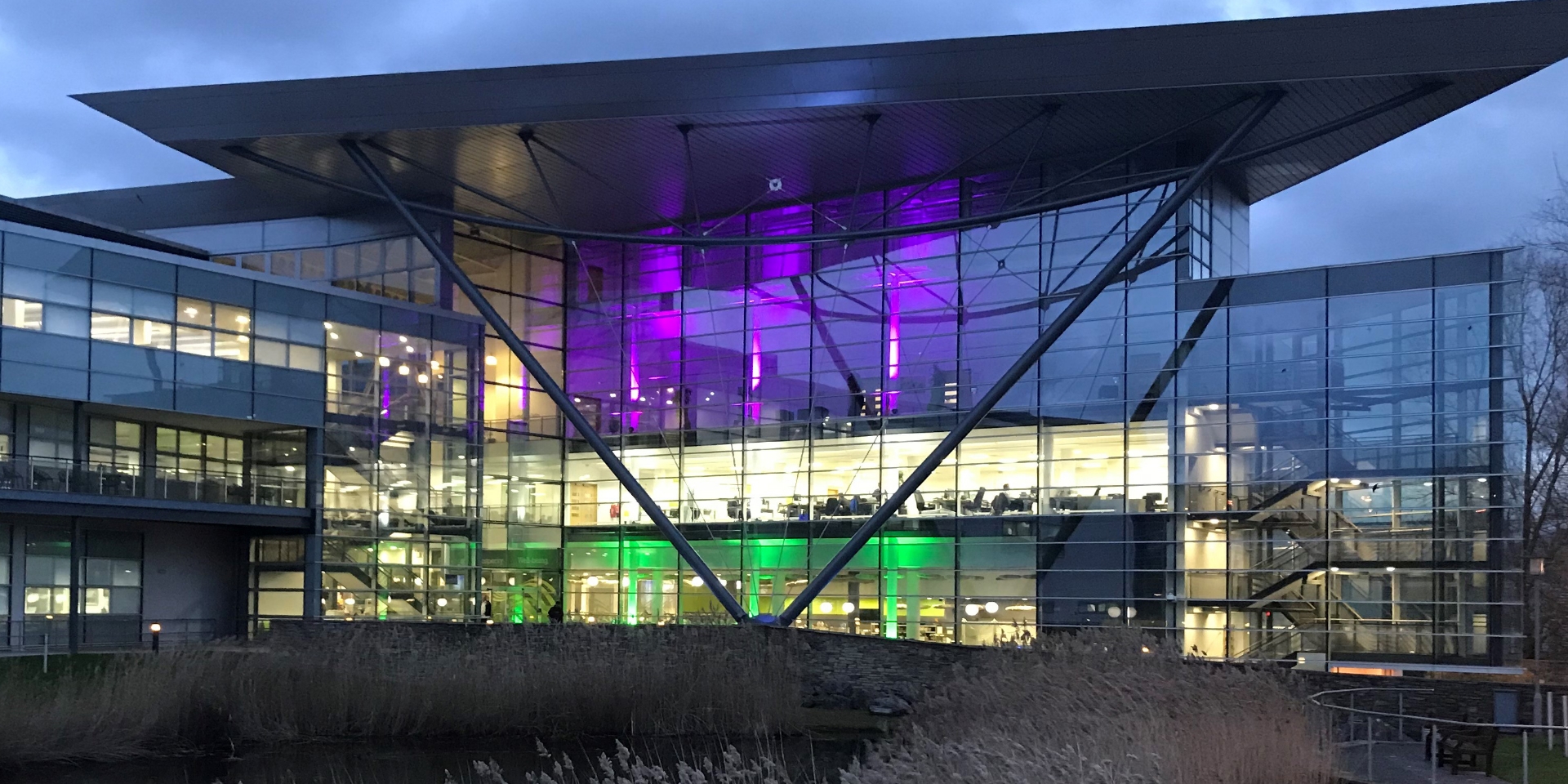 Masters of the storm

Recently, the Met Office had one of the most remarkable and busiest weeks ever in its 168-year history. Three storms named in the one week, two Red Weather Warnings and some of the highest wind speeds seen recorded in over 30 years.

Government, councils, transport operators, the NHS, businesses and citizens were able to take early and pre-emptive action to stay safe. Our warnings help to inform decisions to be made to close schools, suspend flights, trains and ferries, close bridges, postpone appointments and deploy flood defences and helped protect people across the UK from the worst impacts of storms Dudley, Eunice and Franklin.

As Services Director at the Met Office, my role brings much social discussion and humour from my friends about the weather, but I can tell them confidently that Met Office technology is second to none.

In recent years, huge investment in our supercomputing capability has enabled us to increase the detail of our Global and UK weather models. We also have improved data assimilation and use more sophisticated satellite and observational data. Use of ensembles, (where we forecast the weather based on a series of probabilistic forecasts) or multiple runs of forecasts using these models, has given us much greater confidence in outcomes. This in turn allows earlier identification of risks such as those associated with severe storms, which can be refined closer to the event. This, resulting from the long-standing and tireless efforts from our numerical weather prediction (NWP) modelling team of scientists and technologists, has led us to the point where we can now identify storms and issue warnings days before they are seen to be visibly forming on satellite imagery.

As storms Dudley, Eunice and latterly Franklin blew in and the country braced and braced again as to their effects; several days previously, behind the scenes in the Met Office a team of highly skilled professionals had already swung into action.

As well as keeping the public up to date with the weather, the Met Office also supplies information to a host of organisations including the UK Government, as well as the Governments in Scotland, Wales and Northern Ireland, the Environment Agency, Scottish Environment Protection Agency, RNLI, local authorities and emergency services across the country, energy providers, road and rail operators, the Civil Aviation Authority, National Air Traffic Service, and airports including Heathrow. The information we supply allows them to make decisions relating to travel and public safety, as well as deciding on the possible flooding impact - it includes detailed technical data and analysis specifically for their needs.

When were the storms first forecast?

One of the key headlines in the UK three-month outlook for winter (Dec, Jan and Feb), issued in late November 2021 to planners in government and business, stated that there was a “moderate increase in the potential for impacts from strong winds later in the period”. This was based on output from a number of long-range simulations of the atmosphere coupled with expert meteorologists’ knowledge and experience of several known large-scale global  drivers of the weather.

The signs and patterns had therefore long been indicating that February could see an increased chance of wet and windy weather.

Ten days out, our meteorologists had indeed picked up on such a signal for increased storminess across the UK from the middle week of February. When looking this far ahead, we forecast the weather based on a series of probabilistic forecasts - known as ensembles. This is where our meteorologists were able to identify the signal that the following week could be particularly stormy across the north.

Come Monday morning the simulations had moved to clearly identify continued very windy weather for the rest of the week. Confidence had increased enough for our Guidance team, in consultation with our Civil Contingencies Advisors team – who lead our briefing with the Cabinet Office, devolved governments and local authorities – and our media team, to name not one but two storms for the coming week: Dudley and Eunice. This was the first time that two storms had been named at once since the naming scheme began in 2015. Not only that, Eunice was named four days before the storm was even expected to develop, let alone bring its impacts. 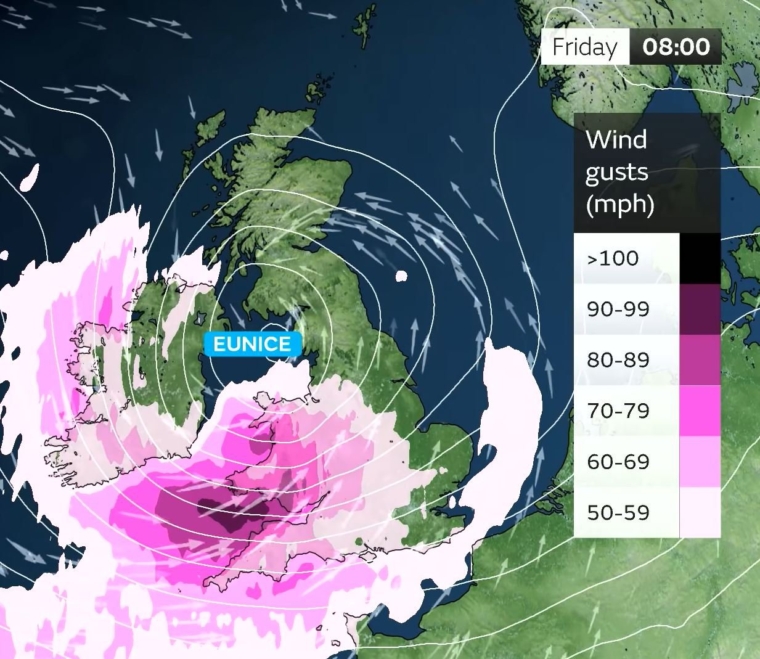 There was much talk of ‘sting jets’ in the media during Storm Eunice – satellite images revealed signs that a sting jet formed over the sea, but it was a short-lived feature and had no impact on the weather over the UK.

The severity of the forecast impacts were such that two red National Severe Weather Warnings were issued for Storm Eunice, then behind Eunice came Franklin, named on the Sunday for the impacts expected over Northern Ireland during the early hours of Monday morning. This was the first time that three storms had been named within the same week. 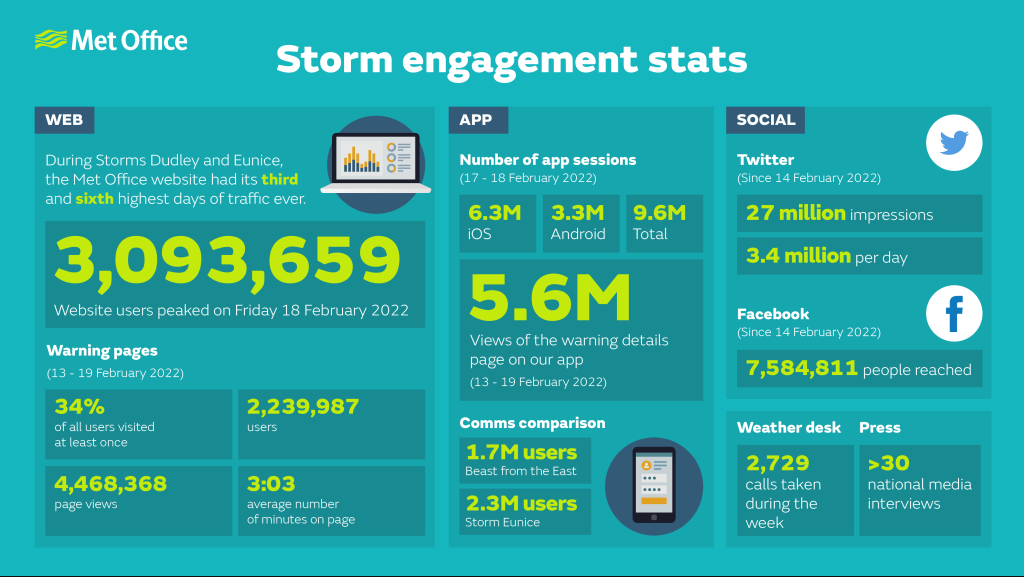 I am proud to recognise the fantastic work that’s gone on during this extraordinary weather week at the Met Office. While it is truly tragic to hear lives were lost, along with flooding and widespread damage to buildings, the tireless work of our meteorologists and all our staff allowed early action to be taken, helping to protect many people from the impact of the weather.

Since the Met Office was created in 1854 my predecessors have built a strong legacy and we keep evolving.

Our ability to produce better forecasts is never more crucial with climate change and an increasingly fast, dynamic and personalised society, I’m proud to lead our Services Directorate and help ensure citizens, industry and government have increasingly accurate forecasts and information to make better decisions to stay safe and thrive.

Simon Brown is the Services Director at the Met Office.